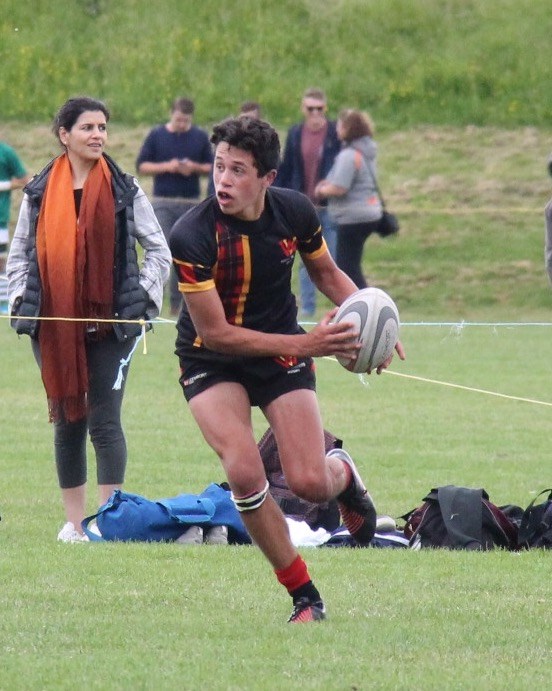 Islander Ben Welsh, seen here playing for West Van Secondary, is set to embark on a rugby trip of a lifetime. The grade 11 student is travelling to Colombia to play with the Dog River Howlers.

Sixteen year-old Ben Welsh will become a gold star member of that group of local sporting adventurers next week when he travels to Medellin, Colombia to play in two Rugby Sevens tournaments. To make the October 29 to November 6 trip all the more exciting, Welsh will be playing for one of the more unique, and philanthropic, sports organizations our country has produced, the Dog River Howlers.

A talented multi-sport athlete, last week Welsh nabbed three interceptions for the West Van Secondary football team. Welsh has excelled at rugby since he began playing the sport at age 10. He comes by his sporting prowess honestly as his two older brothers, Jack, 21, and Charlie, 19, are both former Athlete of the Year winners at West Van.

But Benny may be the best athlete in the family. A terrific hitter in baseball and a fine point-guard in basketball, in rugby he has already played on three teams that represented British Columbia, most recently the B.C. U-16 team.  His talent and hard work has taken him to play in Calgary and Ottawa and has now earned him the invite to play with the Howlers. This is his first sporting trip to another country.

“For sure a highlight will be meeting new people and going to a place I’ve never been and getting to see a different culture,” says the grade 11 student. “A big part of it is the organization and the positive things it does.”

The Howlers were established in 2007 by rugby enthusiast, and life enthusiast, Karl Fix. Headquartered in Regina, the Howlers took their name from Dog River, Saskatchewan, the fictional town in the CTV show ‘Corner Gas’ (2004-2009). The team’s Honorary Captain is noted Canadian Lorne Cardinal, a cast member of the show and a former rugby star for Canada.”

The Dog City Howler website notes they use rugby “as a vehicle to build bridges between people and the world” and that they also “raise funds and contribute to worthwhile endeavours which are not related to rugby.”

The club has raised and donated some two million dollars to causes around the world.  No one in the Howler organization is paid and players and families cover their own expenses, including air fare, meals, everything.

Each family takes along goods to contribute to the cause and the Welshes have stockpiled clothing and sporting goods for Ben to distribute (one family is contributing refurbished computers). Players and their supporters will be going into some of the poorer barrios in Medellin to deliver goods and meet people.

Howler teams have been to Columbia before and other countries they’ve played in include the USA, Mexico, Panama, Germany and Trinidad and Tobago.  Hundreds of men, women and teenagers from 11 Canadian provinces and at least 14 countries have played for the Howlers.  Ben’s team has a player from Egypt and from Holland.

“The rugby will be great and I think we’re even playing their U-16 national team,” Welsh said.  “But the trip is about more than that.”

It is not known which Bowen athlete has ventured out of province the most to play his or her sport but Welsh isn’t stopping here.  In March, he will be traveling with the West Van Senior boys rugby team to play games in New Zealand.