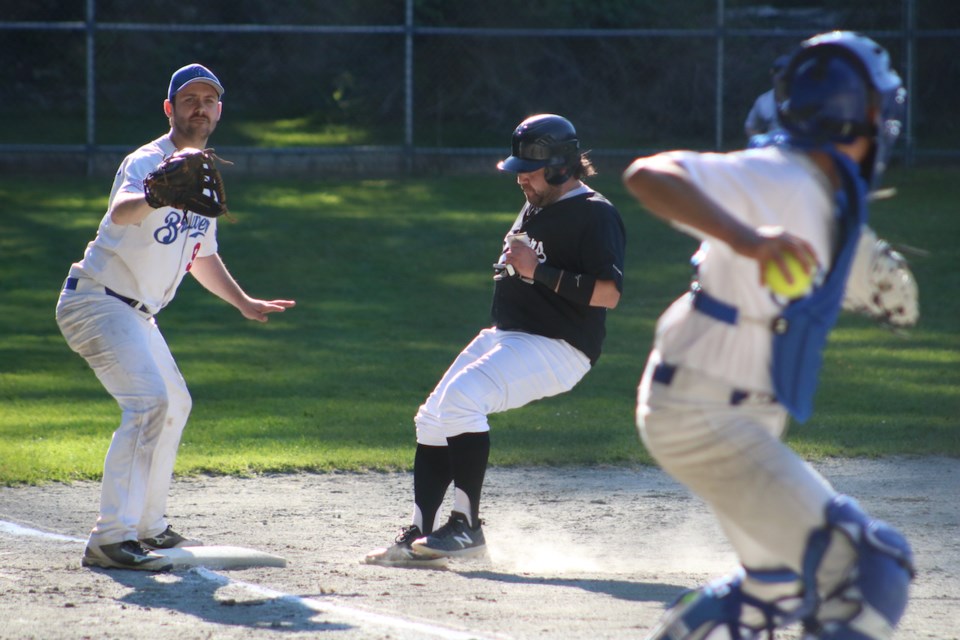 Connor McLeod waits with outstretched mitt at third for a throw that came too late to get Shaker runner Mike Vertlieb. McLeod’s team, the Brewers, beat the Shakers, 12-2 on opening day of the Bowen Island Men’s Fastpitch League 2019 season.Chelsea Strang

The Bowen Island Fastpitch League opened it’s 34th season on Sunday, April 28 with all six teams in action at Snug Cove Field. There was sunshine throughout the afternoon and plenty of fans on-hand to usher in another season of Bowen ball.

The first game of the triple-header saw a rematch of last year’s tournament final with the end result the same, the Diggers beating the Cruisers, this time by a score of 14-13. The Diggers won in dramatic fashion, tying it in the bottom of the seventh and taking it to extra innings where newly-acquired Marlon Strang knocked in the winning run in the bottom of the ninth.

Game two saw the Fireman beat the Twins in a see-saw affair, 13-11.

Fittingly Johnny Franklin, last season’s MVP and home run champ (17), hit the first homer of the 2019 season, in doing so knocking in his brother Adam, who had just hit the season’s first triple.

The big outfielder’s blast was followed by another dinger, this one from Ewan McEachern, and, despite the efforts of pitcher Dan Moats, the Twins couldn’t recover.

While the Fireman have a lineup that is much like the one they fielded last season, the Twins are on a bit of a youth movement, adding, among others, the hulking Blomberg brothers, Jonas, Niko and Mattias. Their father, Eric, now retired, was a stand-out right-fielder for the Fireman in years past.

In the day’s final game the Brewers hammered the Shakers, 12-2. The match-up had extra intrigue as Brewer pitcher Steve ‘the Mound of’ Baskerville was signed in the off-season after playing the last nine years on the Shakers. The veteran kept his former teammates off-balance with a mix of fastballs and junk and got the win for his new club.

Other ‘firsts’ this year include the first pitch; it was a foul ball strike thrown by the Digger Dan Guillon to Cruiser Jack DeSante. DeSante then swung and missed a wicked change-up before lacing a one hopper past Digger third-baseman Ross McCorquodale for the season’s first hit. He came around to score the season’s first run.

The first double of the year was either from Digger Ethan McCorquodale…or Cruiser Erik Hunter-James. In any case, they both doubled early in the game.

On the dubious distinction side, the first strikeout victim of 2019 was Cruiser Peter Blomberg (cousin of the hulking Blomberg boys on the Twins); Blomberg made up for it with some slick fielding plays at third base.

Michael Dawson of the Diggers was the first player to make an error, turning a routine ground-ball into a bit of an adventure. However, the normally sure-handed Dawson atoned for his gaffe with quality hitting throughout the game, including a double that gave his team an early lead.

Veteran Eddie Weismiller, somewhere north of 70, started the game for the Cruisers and pitched one inning; in doing so, he became the first pitcher of 2019 to get three up and three down. Weismiller, who has pitched in every opening day in league history, came out of the game with a 3-0 lead.

The first first-base coach of the season was Greg Bosworth.

Some of many fans on the day included Livea and Lochlan Stevenson, George and Sheila Hunter, Alexis and Samantha ‘Sam’ Stevenson and Edmund Cowper, who brought along his mother, Emily; the two-week-old Edmund was attending his first baseball game ever, there to watch his dad play.

He was the season’s first fan to fall asleep during a game.

In other league news, at the recent AGM the league voted to raise the minimum number of games played to be eligible for the tournament from five to seven. In what can only be qualified as happy news, they also announced that the Bowen Pub is sponsoring the league.