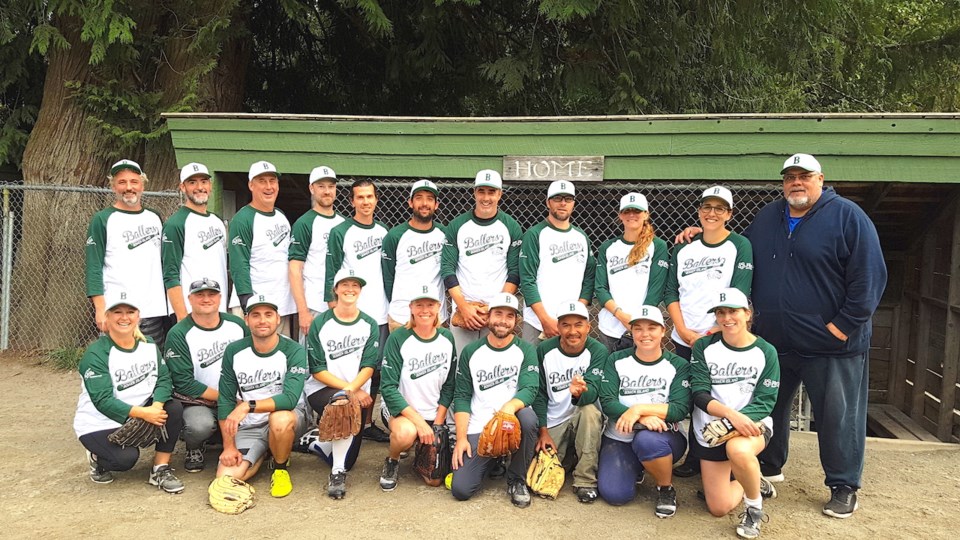 The 'Bowen Ballers' team competing in Langley this weekend.Courtesy of Henry Campbell

“In theory, there is no difference between theory and practice. In practice, there is.” The words of baseball sage Yogi Berra ring more true than ever as the Bowen Island Co-Ed SloPitch league prepares to send a team of its best, and “best of Bowen,” players to compete against teams from all over British Columbia in the SPN Provincial Tournament in Langley this coming weekend (September 13 through 15).

George Zawadzki, president of the Bowen Island Co-Ed SloPitch league and coach of the provincials team, says: “[t]he Ballers are a talented and well-balanced squad that will play hard, and represent the league and Bowen Island with pride.” Drawing as equally as possible from the six teams in the league, George and the executive have put together a team that, on paper, has no weaknesses—but will they be able to execute in crunch time?

Made possible by extremely generous contributions from Ed Weismiller and J & E Backhoe, Bowen Island Pub, and the First Credit Union, the Ballers would love to have a few familiar faces in the stands at McLeod Athletic Park in Langley (should any islanders feel compelled to cross the water to watch some extremely…enthusiastic…softball).

Whatever the outcome, the Ballers will heed the immortal words of Jimmy Dugan: “there’s no crying in baseball!”

Ballers’ game schedule: first is Friday 7:40 p.m. vs. Sitters and Hitters at McLeod Athletic Park. Second is Saturday at 10:40 a.m. vs. Mariners at Ron Ralph Field. Third game is at 2:40 p.m. vs. Hot Pockets at Brown Park - Diamond  1. It is a three-game round robin format followed by single elimination. Elimination games start Sunday.