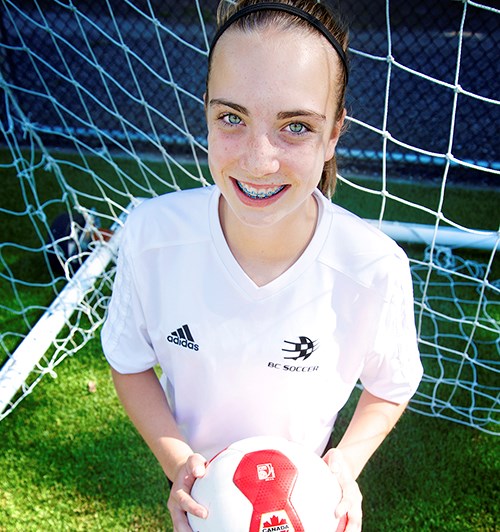 Molly Quarry got her start on Bowen Island.Debra Stringfellow

Molly Quarry may be only 13 but she’s proving to be quite the contender in the world of soccer. Her dedication to train, her hard work on the field and her drive to succeed is quickly sending her to the top of her game.

Molly started playing with the Bowen Island Football Club (BIFC) when it first started up in 2007.  She worked through the co-ed development stages and then graduated into league play here on the island.

“The coaching on Bowen was great. I really miss BIFC practices because they were challenging but really fun. With BIFC I got many opportunities to get lots of touches on the ball which put me ahead of some other players I am now up against,” she says.

BIFC’s co-ed approach helped Molly improve her game play and her strength. “Playing with the boys team on Bowen really changed me as a player. I learnt to be aggressive on and off the ball, strong shape passes, staying calm under pressure and learnt so much about the sport.”

Once a player hits a certain age and skill set it becomes increasingly difficult for BIFC to support their needs, so players who want to continue to play competitively join clubs over on the mainland.  BIFC is honoured to see many players go on to play in North and West Vancouver clubs at the Gold and Metro levels.

Molly, after leaving BIFC, was accepted into a high performance league (HPL) called  Mountain United. Only 18 girls were picked and Molly was selected for this team out of 115 girls within her age group.  She is currently playing centre back for her club team and she proudly holds the title of team captain.

Molly has no problem finding her voice on the field as she learns all the responsibilities of such a key player.  Certainly for someone so young, Molly understands that in order to gain the respect of her team she has to work twice as hard as anyone else.  For someone as driven as Molly this is not a problem.

All this hard work has paid off for Molly as this young athlete was recently accepted into yet another level of play.  Chosen out of 144 girls, all who play for HPL teams throughout the province, Molly was one of the lucky 20 who will play for TeamBC, the provincial team representing British Columbia. These players are always on trial and constantly being evaluated by BC Soccer. It is both an honour and a privilege not given to just anybody. Molly appreciates the opportunity and works hard to stay on the team.

Molly is highly focused on her teams at hand but definitely has future goals and aspirations, “I would like to play for Team Canada. The Women’s World Cup has really motivated me and some players I have met have been invited to the team Canada camps. My inspiration right now is Jessie Fleming. She is 17 years old and is playing on the Canadian Women’s National Team in the World Cup. She is the youngest player on Team Canada, which is a huge accomplishment.”

If you are interested in learning more about soccer on Bowen go to www.bowenfc.com. Registration is now open for both coed development and league teams.