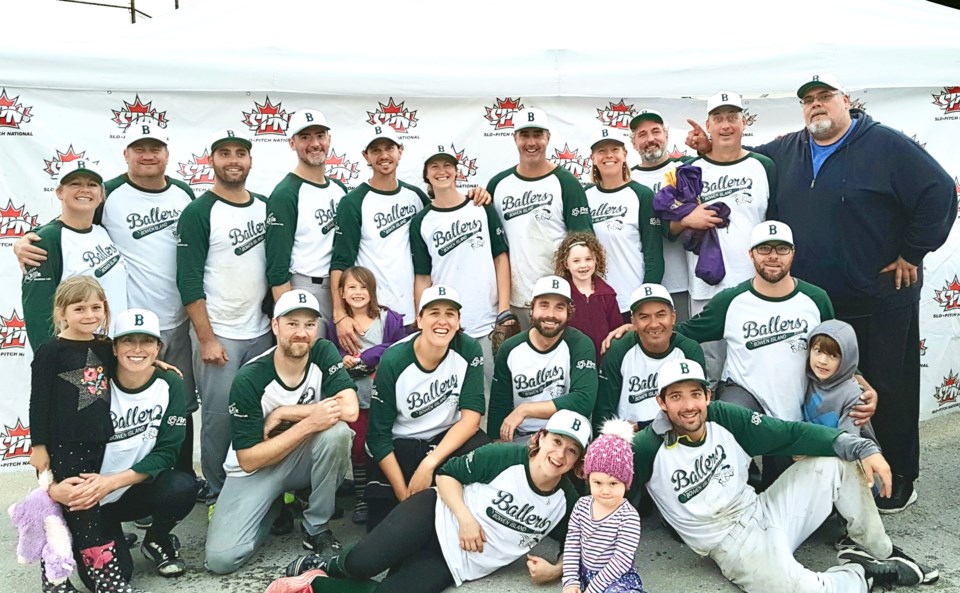 As the Bowen Ballers took the field under the lights at MacLeod Athletic Park for their first game Friday night, more than one player remarked that it felt like they were playing in the “Show” (the big leagues).

And no wonder: the players and teams at the SPN Provincial Tournament were not messing around. From custom rolling luggage, full graphic team jerseys (the “Winnipeg Snow Cheetahs,” who hailed from Squamish, were a highlight), $1,000 bats, and extremely thick necks, these teams lived and breathed softball…and it proved to be an education for our hometown heroes.

The biggest adjustment for most players was the field itself. The Snug Cove diamond is about 220 feet at its longest point. The nearest fence in Langley is around 300. Over the fence home runs on Bowen became routine fly balls in Langley. Couple that with every team having ladies who could crush the ball and guys who could send it into space, the Ballers had their work cut out for them.

No one felt the hitting power of provincials players more than Rich Ralph and Rachel Klingler who were sitting in their car when it was impacted by a ball from what must have been close to a 340 foot jack. No one was hurt, but the car was dinged, and the Ballers were on notice that they were not on Bowen anymore.

The Ballers went 0-3 and were mercied (losing by more than twelve runs going into the fifth inning) twice in the seeding round.

After being worked over 15-2 by the Hot Pockets (who only played nine players and still destroyed them), the Ballers sat in the stands under drizzling rain trying to regroup. Though still all smiles and high spirits, to a player everyone resigned themselves to the very real possibility that they would be eliminated in the first game Sunday morning, going 0-4 on the trip and returning to the island without a lot to show for their efforts except going three for three on coin tosses.

As manager George Zawadzki finally arrived for the 8 a.m. game against the Black Knights, coach Spencer Grundy put the finishing touches on his lineup. Grundy and Zawadzki held true to their word: “everybody plays” and stuck with the agreed upon roster…though Grundy made some shrewd adjustments, most notably moving Robbie Clayton to the outfield and locking Andrea Layzell to first base.

Maybe it was George, maybe it was having nothing to lose but the Ballers started turning things around.

One asset the Ballers had over other teams was foot speed and they never passed up a chance to use it, always pushing for the extra base. This forced the Black Knights to make a play and seemed to surprise them. And then, finally, the Ballers’ bats caught fire. They racked up consistent hits and pulled off their first win with their tournament on the line, notching up a tonne of flesh wounds against the Black Knights and sending them home with a 14-8 defeat.

As the Ballers prepared for their second elimination game against the Hound Dogs, veteran player Brad “Ripper” Rypien (best summarized by his own maxim: “Back in the day, women wanted me and men wanted to be me”) noted of the playing conditions: “this is the worst I’ve ever seen.” The deluge continued and the infield looked more like a map of the great lakes than a reasonable ball diamond. Ground balls became completely unpredictable, often dying in puddles or ricocheting off of them at impossible angles.

The Ballers weren’t the best power hitters but one thing they could do was keep it on the ground, confounding infielders and taking advantage of footspeed to rack up runs.

An entire article could be written about the incredible catches of Robbie Clayton but the highlight was in the game against the Hound Dogs. They pounded a deep shot straight down the left field line for what looked like a sure extra base hit. Clayton was more than fifty feet from where the ball would land when it was struck. Sprinting at full speed, Clayton laid out and appeared to be flying without the restrictions of gravity, snatching the ball out of the air and pulling off the greatest catch this writer has ever seen in person. The Ballers cruised to a 14-8 victory and were headed to the semis against the Sweet Spot.

The Sweet Spot, the team of tournament organizer and president of the largest SloPitch league in Canada Peter Zeller, had made it to the finals every year since they started playing in the tournament and looked poised to do it again. But the Ballers were not going down without a fight.

As the sun came out, strong winds from the west pelted the field and also neutralized the power hitters of the Sweet Spot, forcing, again, the players to hit ground balls or fly out.

It is difficult to imagine a more exciting game. Back and forth play and tight fielding saw the Ballers tied after six and going to extra innings. In SloPitch, you start extra innings with a runner on second and one out. It’s a system that’s designed to put the game to bed quickly.

With the tying run on third and a runner on first, the batter hit a hot ground ball to ace pitcher Ben Sunderland. In the heat of the moment, he sent the ball to first instead of going for the lead runner. Andrea Layzell caught the throw, making the second out, with the opposing player sprinting for home. Seeing that the runner was safe on second, she fired a bullet to a perfectly positioned Jessie Perry who caught the ball a half second ahead of the runner for a game ending double play.

The Ballers erupted in cheers (and were joined by the Hot Pockets who, sitting in the stands, were now rooting for the underdogs from Bowen) and elation. George, sitting on the bench, smiled like the Cheshire cat. Everyone hugged and high fived as real life became a Disney movie. The Ballers were going to the finals in their first tournament ever away from the island. You couldn’t write this stuff.

Though strong for the first two innings, the Ballers were overmatched by Jersey City and the Cinderella run came to an end in the final game. As the Ballers gave their opponents three cheers, they gave themselves a much-deserved cheer.

You could not wipe the smiles off the faces of the runners up as they said their goodbyes and walked off the field. Those who love sports know that, at its best, there’s little that compares to a team coming together and being there for one another. It’s the same qualities that make families work and the same thing that makes for the best parts of life. It’s a kind of love that’s difficult to understand without being a part of it. But the Ballers felt it a on a glorious September day in Langley.  Bowen Island, they did you proud.