Diggers and Cruisers rematch for fastpitch trophy (to the same result)

The Bowen Island Fastpitch League’s year-ending tourney at Snug Cove Field last weekend saw a drop in fans from the massive turnout of 2018.
Aug 15, 2019 11:27 AM By: Marcus Hondro 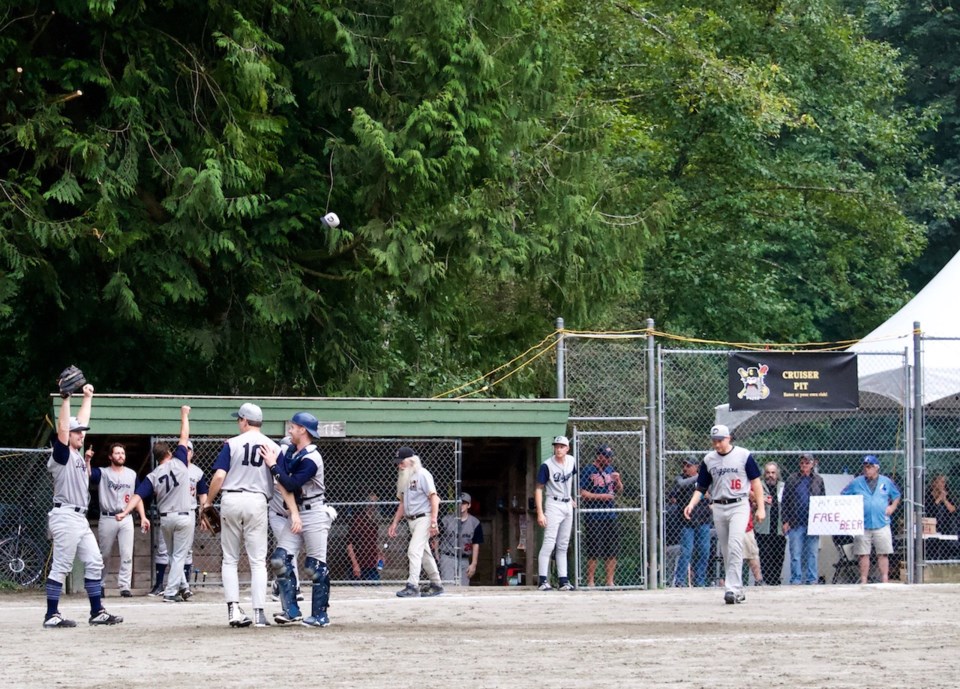 The Diggers celebrate after winning the 2019 men’s fastpitch tournament.Bronwyn Beairsto

The Bowen Island Fastpitch League’s year-ending tourney at Snug Cove Field last weekend saw a drop in fans from the massive turnout of 2018.

But while scattered showers stopped some fans from attending the drizzle did not stop the Diggers from playing winning baseball.

Lead by the arm of pitcher Adam Woodward, the Digging crew beat the Cruisers in the final, 4-3, to take the coveted Scott Helenius Trophy, emblematic of the local fastpitch supremacy. The same two teams met in the final last year with the Diggers winning that game, too.

The Diggers have won four times in the last five years, five times since 2011.

The game was won in part on the strength of a two-run home-run from veteran Dan Cowper in the third inning. Cowper’s club carried a 4-0 lead into the sixth when Cruiser Jamie Weismiller manufactured a run with daring baserunning, narrowing the gap to 4-1.

In the seventh Clayton Hunter-James smacked a line-drive single for the Cruisers and with two out Robbie Watson connected on a Woodward fastpitch for one of his patented blasts to make it a one-run game.

But Woodward got a deep fly to right-center and the season was over.

The tourney was highlighted by a slew of close games, including the Cruisers edging the Fireman with a dramatic sixth inning home-run, 8-7 in a game that helped knock the Fireman, 2019 regular season champs, out of the tournament without making it to the semi-finals.

In another nail-biter the Shakers, lead by pitcher Noah Pryce-Jones, beat the Brewers, 5-4, in a game that saw the Brewers take the lead in the top of the seventh only to have the Shakers score twice to win it in the bottom of the inning.

The Brewers finished last in 2018 but vaulted up to second this year, rarefied air for the surging club, bolstered by the addition of pitcher Steve ‘the Mound of’ Baskerville and consistent hitting from the likes of James Strang, Derek Sinke and Robert Clayton.

Along with the Fireman, the rebuilding Twins did not make it to the final four, going the tournament without winning a single game. The result saw the two perennial league powerhouses literally sitting on the sidelines for the semi-finals.

In the best of Bowen baseball tradition, players from the Twins and Fireman, along with many of their families and friends, stayed to watch the rest of the tournament.

In one semi-final the Brewers were only down 7-6 heading into the seventh and were fighting to make to the final for the first time since 2009, when they were known as the Celtics. But it was the Diggers they had drawn and Michael Dawson, Eric Ander and teammates broke it open and won, 12-6.

In the other semi-final the Cruisers needed an extra inning to beat the Shakers, 14-11. That game featured a gutsy performance from Cruiser Spencer Grundy. Back from injury, the tournament was the first time the veteran Grundy has ever played baseball without an appendix, having had his removed last month.

At the ceremony at the end of play, ‘El Presidente’ Grundy handed out awards. Highlights included Digger Marlon Strang winning Rookie of the Year (the rich got richer) and Duy Son taking home the Greg Cope Award for sportsmanship, the second straight year a Twin won the award, a shocking development to some league vets.

Diggers Adam Woodward and Dan Guillon shared tournament MVP. A list of trophy winners will be up on the league’s Facebook page.

Once more the tournament featured a beer garden, food, amusing, cute-as-button children (Dylan, Owen, Griffin, Mikayla, Sophia etc.), many chasing homers and foul balls for a buck. There were also many dog fans (Kula Scrivens, Rufus, Duke, Coco and Pasquale Deegan among them).

Yet again there was outstanding work from the stats division and from announcers in the scorers booth (“The next batter: Jesus” for the long-and-thick-bearded Alex Lipsey-Ouimet, a.k.a. A-Lo).

When the 34th season was over and officially in the books, Cruiser owner/manager/third base coach and pitcher Eddie Weismiller, who has played in each of those seasons, announced his retirement.