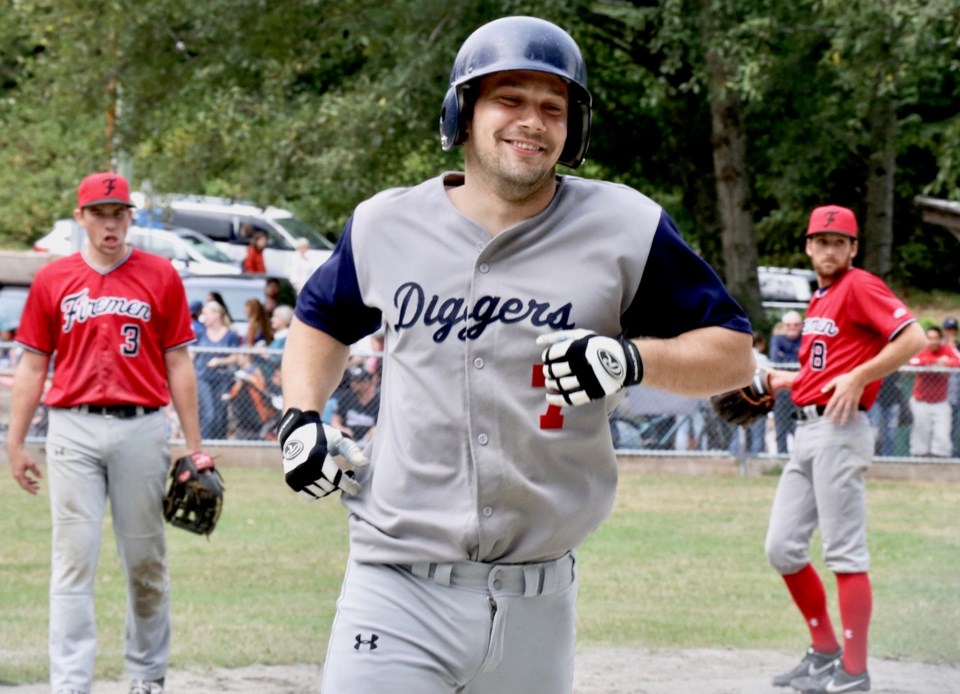 Aaron Johnstone of the Diggers rounds the bases after hitting one of his many home runs last weekend.

The ending wasn’t a surprise as the Diggers put an exclamation point on their dominating season with a 10-2 thumping of the Cruisers in the final to take home the coveted Scott Helenius Memorial Trophy.

Digger pitcher, Dan Gullion, went six strong innings in the final, giving up only one run. Rarely allowing a runner even to gain second base, Guillon mixed his patented fast ball with junk and worked the corners to keep Cruiser hitters unbalanced.

The game was a tight affair through four innings, with the Cruisers getting a gutsy performance from their pitcher, Jamie Weismiller, who was pitching his second game of the day (the Cruisers’ third total). While the Diggers were getting men on base, Weismiller kept getting big outs to end threats.

Leading just 2-0 after four innings, the Diggers opened it up in the fifth when Aaron Johnstone hit a three-run blast that all but put the game out of reach. Johnstone, tournament MVP, was repeating his heroics from the semi-final game, when he hit a ‘walk-off’ grand slam to beat the Fireman, 13-11, and send his team to the final.

In total the six teams played 12 matches over three days and there was a lot of great baseball. The tournament had outstanding fielding, such as Clayton Hunter-James barrelling in from right-field to make two running catches for the Cruisers, or Digger Michael Dawson making an improbable leap at second to snare a line-drive, or Fireman third-baseman Liam Zahara diving for a ball and throwing to second for an out, while still on the ground.

There were also displays of power. The Cruisers alone hit 15 homers, six from Robbie Watson, one of which will surely become the stuff of legend as the ball sailed well over the Sue Clarke’s house and was found in the parking lot behind the pub.

Every team knocked a few out in what may have been a tournament record for home runs.

There were also shows of good sportsmanship in each and every game and it was a weekend for the community to join together and celebrate. Dozens of small children attended, many running about collecting foul balls for 50 cents. As is always the case, many of the men on the field and women in the stands, such as Kylee Lightbody and Josie Huskisson, were once themselves kids collecting foul balls at the tournament.

During the presentation of trophies following the final, league president Spencer Grundy told a large crowd of players, families, children and fans that the tournament showed baseball “is alive and well” on Bowen Island. He noted that the they added another bleacher for this year and the crowds were so large that he could only see this thing getting bigger each year.

The opening game of the tournament Friday night saw the Diggers up against the Brewers and, despite being a worst-versus-first affair, the game was close and highly entertaining. The Brewers and pitcher Brian Thomson put up a fight but the Digging crew pulled out an 11-8 win. That game set the tone for the competitive nature of the weekend.

Teams take turns operating the beer garden and food tent and this year it was the Brewers who did the serving. So, despite being one of two teams eliminated after round-robin play, Brewer players, girlfriends, wives and families, such as Chelsea Strang and Karis Clayton, kept busy serving up food and beer. Team manager Amos Rosen and his club were lauded for a job extremely well done.

The other team to go out in the round-robin were the Shakers. While they got great pitching from their trio of veterans Glen McGregor, Steve ‘the Mound of’ Baskerville and Noah Pryce-Jones, their offence failed to show up, scoring only three runs in their first two games. The club did manage a 7-7 tie in their final game but it was too little too late.

Last year’s champs, the Twins, made it through to the semi-finals undefeated and played the Cruisers. The Twins kept battling back from deficits with key hits from the likes of veteran Shawn Davies, but fell 10-8. Earlier they’d beaten the Shakers, 6-2, and Fireman, 12-2, so pitcher Dan Moats and the rest of their staff were strong. The Twins were the only club to beat the eventual champs in the tourney, having defeated the Diggers 12-10 in round-robin play.

The Fireman, a club that has won the championship title seven times, last time in 2013, looked ready to get to the final yet again. Ewan McEachern hit a grand slam to beat the Brewers in their final round-robin game, then they took a three-run lead into the seventh of the semi versus the Diggers. That’s when Johnstone matched McEachern with a game-ending shot.

As for the Cruisers, it was all about power. The team scored a whooping 43 runs – Brewer pitching fell victim to many – and kept hitting homers right up until Guillon shut them down in the final. Along with the behemoth Watson, other Cruisers to go yard included Grundy, Erik Hunter-James, Dave Atkinson, Peter Blomberg and Jack DeSante.

For the Diggers, who easily won the regular season crown, the win might ignite a conversation around the word ‘dynasty.’  It was their third championship in four years, and their fourth since 2011.  They were again lead by Gullion, Johnstone and the Woodward boys, Adam and Tom, and those four Diggers, and others, are still relatively young.

A highlight of this year’s affair was the the announcing.  Without an official announcer, the job was done by a committee, including past president Glen McGregor and players such as AJ Ballou and Liam Zahara.

But it was Fireman Luke Watt who took the lead.

When it comes to comparing Watt’s work to other baseball announcers, he was more the Harry Caray type than the staid Vince Scully. With Watt, add a dash of comedian Hannibal Buress and you really get the picture.

From playing the Presidents March and riffing on ‘El Presidente’ when league president Spencer Grundy hit a home run (he whacked three) to teasing players for everything from their socks to physique, Watt, who, by the way, is a pretty good ballplayer, had fun and managed to step on only a few toes. Next week he’ll be appearing at Yuk Yuks in downtown Hood Point.

The 17-year-old Keelan Hondro was rookie of the year while Brian Thomson was senior player of the year.

The competitive Greg Cope Award for Sportsman of the Year went to Twin Brent Molinski, who also won most improved pitcher

The Bill Taylor coach of the year winner was Big Jim Gibson, a long-time league fixture. (Had his club not made it to the final four, it might have been a PR catastrophe for Gibson.)

The league isn’t done for the season.  They will play an exhibition game at Bowfest, featuring all-star teams of under 30s versus over 30s.  Paul Whitecotton, Robert Clayton, Jimmy Skuce and Ross McCorquodale are among the elderly stars selected, with Lucas Puri, Marty Greyell, Adam Franklin and Connor McLeod among the young bucks.