Lack of agriculture and high biodiversity on Bowen is good for pollinators, but we can do more
May 21, 2018 11:10 AM By: Joyce Cameron 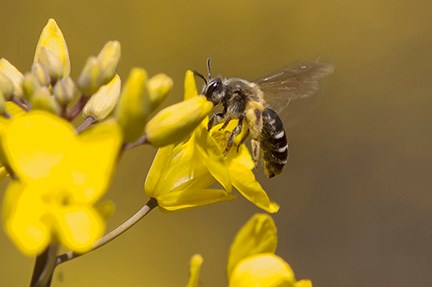 This bee photo was taken in the Community Supported Agriculture garden owned by Marion Moore and Jean Jamieson at Collins Farm.Will Husby

In recent years, we’ve heard a lot about the “colony collapse” of bees and the threat to global food crops. Is this a real threat in Canada?

We spoke with Will Husby, Bowen resident and entomologist, who says the 75 per cent decline in flying insects, as reported in Germany, is likely the case in Canada as a whole.

On Bowen, the situation is better.

“The island isn’t a dense urban area, and our agriculture is small scale,” Husby says. “Large-scale agriculture depends on pesticides, particularly bee-killing neonicotinoids. We have high biodiversity here with one of the most natural environments of BC coastal communities.”

The task on Bowen is to maintain what we have, Husby says.

“We need to keep up the island’s biodiversity to support pollinators.”

Who are the pollinators?

Any insect or animal that carries pollen from one plant to another. That includes bees, wasps, flies and, yes, even mosquitoes.

Bats and hummingbirds are also pollinators.

“On Bowen, honeybees pollinate about 10 per cent of plants and native bees about 70 per cent,” Husby estimates.

Other pollinators take care of the rest.

“A single native bee can pollinate as much as half a honeybee hive,” he says.

“When it’s raining, native bees keep pollinating while honeybees are back at the hive with their feet up, sitting in front of the fire.”

What can each of us do to help pollinators on Bowen?

“Don’t plant lawns. Keep a natural environment. Plant so that you have blooms early and late in the season.”

Su Rickett, a Bowen garden designer and consultant, adds that hummingbirds love winter jasmine, or Jasmine nudiflorum, that blooms from November to March.

Linda Gilkeson, BC garden blogger, warns us not to assume that every plant labelled as good for pollinators really is.

They may have been altered from original, wild plants so they produce less nectar. As well, changes like double flowers may keep pollinators from reaching the nectar. Gilkeson encourages planting, “the least manipulated flowers.”

Avoid pesticides and never use neonicotinoids.

Learn about and use plants that act as natural pest controls.

Husby extols the benefits of cilantro. It attracts helpful insects like wasps that control caterpillars.

Native beesmake homes in stems of plants and under rotten wood. They hibernate in winter and use the nests for baby bees in warmer weather.

Ninety per cent of our food needs pollinators. Taking care of them takes care of our food supply.