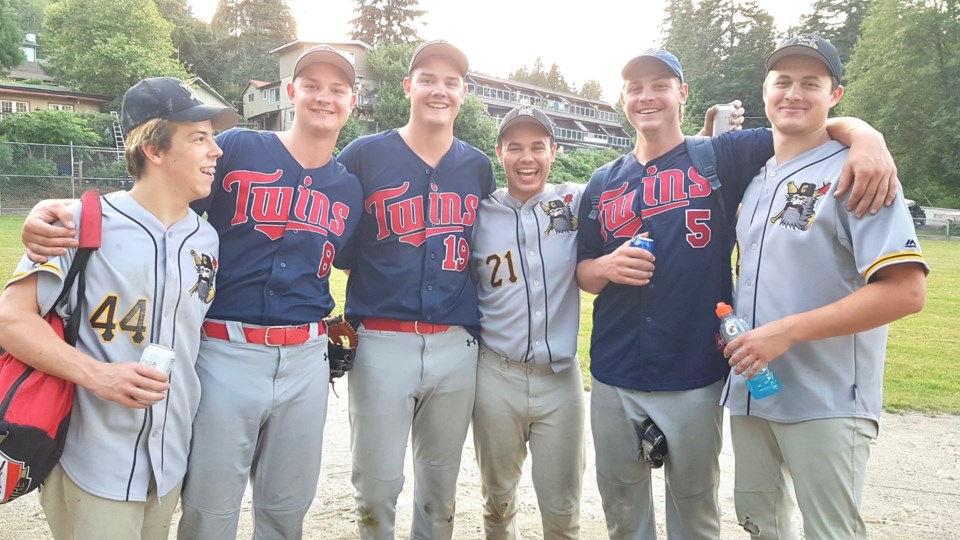 Friends meet in battle: The Hulking Blomberg brothers are now a fixture on the Twins baseball club and last week at Snug Cove Field they found themselves playing old childhood friends when they went up against the Cruisers. Left to right, the kids who spent many summers together at Sandy Beach are: Keelan Hondro, Mattias Blomberg, Jonas Blomberg, Jack Welsh, Niko Blomberg and Charlie Welsh. The fastpitch league’s annual tourney goes August 9-11.Marcus Hondro

The Bowen Island Men’s Fastpitch League is winding up another regular season at Snug Cove Field, its 34th, and gearing up for the yearly playoff tournament on August 9-11.

There have not been a lot of surprises in the 2018-19 season. The Fireman and Diggers were expected to battle for first place and that has been happening from opening day to the latest standings, posted on the league’s Facebook last week.

Led by their usual crew including the McEachern and Franklin brothers, along with pitcher Kurt Stuart, The Fireman, at press time sporting a 14-3 record, have pulled away and all but clinched first, winning not just the season but the right to choose a more favourable draw in the tourney.

The club finishing second also gets a more favourable draw in the tourney and there is a surprise in the battle for that position. The Brewers, 11-6, a team yet to win the tournament that usually sits at or near the bottom of the standings, are fighting for second with the Diggers (11-7).

The Diggers have won three of the last four tournaments.

Helped by an off-season trade that saw them acquire both pitcher Steve “the Mound of” Baskerville and utility fielder Brad Rypien from the Shakers for the rights to Donnie Nicholson and Terry Cotter (neither of whom came out of retirement to play), the Brewers haven’t relied solely on a bolstered pitching staff.

The club, managed this year by the artful baseball mind of Ben Roocroft, has been hitting its way to wins, led by Derek Sinke, James Strang, Calvin Hagge, Robert Clayton and Connor McLeod.  Younger Brewcrewers like Wilson ‘the Willing One’ Dives have upped their game, too, and their defence continues to be led by fleet-of-foot centre-fielder Jackson Miller.

The Diggers continue to get their wins on the strength of an experienced pitching staff, led by Dan Guillon and Adam Woodward, and a line-up chock full of beefy power-hitters such as Aaron Johnstone, Brandon Speight, Charlie Barbour and a newly-minted father, Daniel Cowper.

The rest of the league standings have the Cruisers in fourth at 9-9, the Shakers in fifth at 6-12 and the rebuilding Twins at the bottom with just two wins.

Those Twins, historically the league’s winningest franchise, are an example of how regular season standings don’t have meaning in the tournament: two years ago the Twins came from the back of the pack to win it all, again.

The final scheduled league game goes Friday, August 2 (Cruisers v. Brewers). Big Jim Gibson, manger of the Cruisers, guarantees a win in that one.  “If we don’t win that game,” Big Jim promised, “I’ll buy the Brewer who gets the winning hit a beer at the pub afterwards.”

In the days following that match-up any uncompleted rain-outs will be played and then a draw will occur for the tournament, first game going Friday, August 9 at 6:30 p.m.

Information about games and the tournament can be found on the Bowen Men’s Fastpitch League Facebook page.  That page also has write-ups on games from scorekeeper/statisticians/chroniclers Cheri Fleming-Netzlaw and Kat Stephens.

Golf course reopens for Bowen Islanders but with strict rules in place
May 1, 2020 12:09 PM
Comments