Ring around the island: 18th annual Round Bowen Challenge

The 18th annual 'Round Bowen Challenge last weekend saw 81 competitors circle the island on their own steam
Jun 5, 2018 9:45 PM By: Brent O'malley 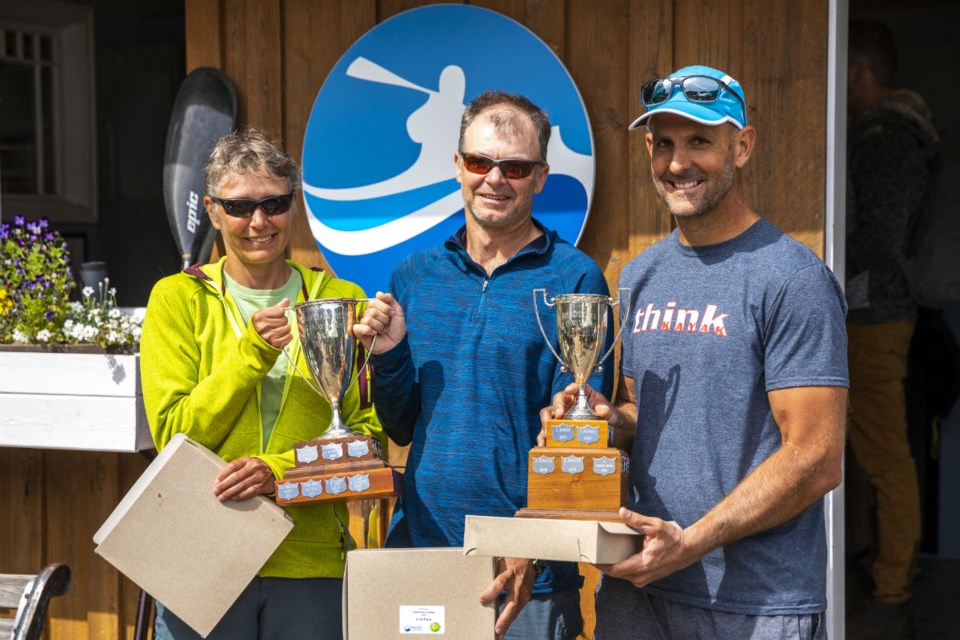 Left to right: Top racers were cheered and earn a nameplate on the trophy. Katja Rademacher and partner Jeff Raymond took first place in the double kayak category. The fastest kayaker in a single was Greg Redman. Winners got a box to fill with pie of their choice from Lime and Moon Pie Company.Colin Herrington

On June 2, seven islanders competed with 74 other racers in the 18th annual ‘Round Bowen Challenge, hosted by Bowen Island Sea Kayaking.

While there was rain in the forecast, it turned out to be a beautiful day for circumnavigating the island’s 32km coastline. At the beginning of the race a strong in-flow wind pushed some paddlers up to a speed of 16 km/h along the south coast.

The challenge draws a committed group of paddlers who look forward to it every year. Several of the racers have competed more than 10 times and a handful have returned to circle Bowen for 15 years or more. While most of the racers come from the lower mainland, this year there were 10 from Kelowna, Vernon and Nelson, as well as a couple from Seattle.

The Half-Island Challenge is gaining in popularity. This year, seventeen registrants opted to start their race at Tunstall Bay and, paddling clockwise, covered a distance of 19km. The youngest half-island paddler was nine-year-old Liliana who was competing with her dad for the third year in a row. Next year she is determined to race the whole island.

The fastest single kayaker was Greg Redman at 2:32, shaving six minutes off his winning time of last year. The fastest double, paddled by Jeff Raymond and Katja Rademacher, crossed the finish line at 2:34. These were not record-breaking times, but it is amazing that winners consistently finish in about two and a half hours every year.

Other notable times were Sally Wallick at 2:43 (women’s single surf ski) and Davide Cina at 3:31 (men’s stand up paddle board). Three prone paddle boarders competed by paddling with their hands. First place winner Joel Perkins posted 4:14, besting his time from last year by more than 40 minutes.

A special mention is due to Dominique Preney, the only competitor paddling in a coastal rowboat. He crossed the finish line in an astounding 2:00:54. And a very special mention must go to the safety boat volunteers for keeping the racers safe: Harry Patrick, Frazer Elliot, David Verlee, Robbie Clayton and Josh Stone, as well as Horseshoe Bay Search and Rescue.

The post-race party and barbecue did not disappoint, with a delicious salmon dinner served up by Christoph and Julie of Artisan Eats. The Bowen Island Pub provided beer and the Ruddy Potato came through with after-race fruit snacks. Deep Cove Canoe and Kayak, Think Kayak and Prone Canada provided awesome prizes for the drawings. All winners were treated to pies from Lime and Moon Pie Company – whole pies for first place winners and slices for second and third place finishers.

Every participant received a hand-thrown ceramic mug made by local potter Sue Clarke. The challenge of paddling around the island, the great food and camaraderie afterwards, and lovely mugs, are traditions that bring people back to the race year after year.