Five years ago, when Phil Osborne moved to Bowen and ran around Mount Gardner for the first time, he thought the loop around was too good to be true for a trail running race.
Sep 8, 2017 3:47 PM By: Meribeth Deen 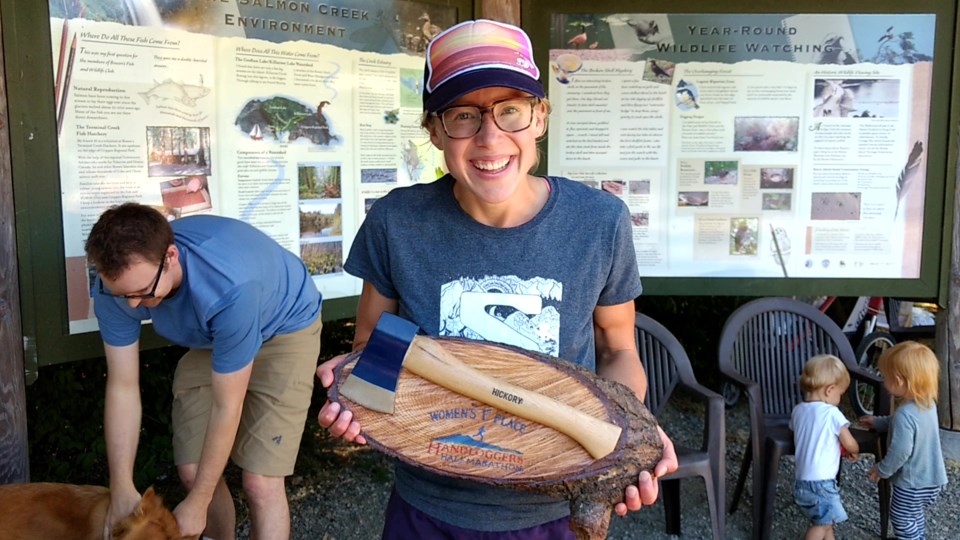 Five years ago, when Phil Osborne moved to Bowen and ran around Mount Gardner for the first time, he thought the loop around was too good to be true for a trail running race. This past weekend, he fellow trail runner and race-director Alicia Hoppenrath saw the shared dream of a race, named the Handlogger’s Half-Marathon, come true for the fourth time, with more participants than ever and women taking two of the top three finishing spots.

“It was pretty cool to see women finish so well in this race,” says Osborne. “There are a lot of great female trail runners these days, and this weekend the women who ran were pretty exceptional.”

Jeanelle Hazlett, who lives in North Vancouver, placed first overall with a time of 1:51:59.

“I ran my first ultra-marathon last March, and I have run three since then,” says Hazlette. “I just really, really love running.”

Hazlett says she hiked Gardner once prior to the race, but had not been on the trails on the west side of the mountain.

“I was familiar with the logging road, which is quite steep. I thought, if this is part of the race, it’s going to be mean,” says Hazlett. “I didn’t entirely know what to expect from the terrain, so was pleased to find some nice flat sections. Then, on the back-side of the mountain, going downhill, I just let myself run. I am normally cautious going downhill but this was a race so I just turned my brain off.”

Hazlett says she’ll definitely be back to run Gardner again in the future, and she would like to bring her whole trail running group, the Pacific North West Trail Runners, with her.

Ashley Ramsay is an ultra-marathon runner from Squamish, and finished second overall with a time of 1:55:52.

“This race was a bit short for me, I tend to prefer runs between 50 and 100k, but the trails were just gorgeous,” says Ramsay, who adds that she was pleasantly surprised by the intensity of the uphill portion of the race.

Ramsay says that she definitely intends to come back and run Gardner again, and bring her friends.

These responses confirm Osborne’s initial feeling about Gardner, and demonstrate the appeal of the course. This year, 99 runners entered the race, up from 60 last year and 65 the year before.

“Every year we try to make it a little better, and the goal is to make it a really challenging but safe and fun event,” says Osborne. “Also, one of the things we hear a lot from people that come is the spirit, lots of people cheering at the finish – even if you’re not at the front of the race you still feel supported. The runners also have good things to say about the island as a whole.”

Both Osborne and Hoppenrath participated in the race as part of three-person relay teams as well.

“I was super inspired and motivated by everyone who showed up,” says Hoppenrath. “This race also really shows the potential of what Bowen has to offer.”

Women
First - Jeanelle Hazlett 1:51:59
Second - Ashley Ramsay 1:55:52
Third - Margaret Butler 2:04:03
Men
First - Colin Gilliam 1:56:26
Second - Troy Tucker 1:59:16
Clive Butler - 2:04:03
Relay Results:
First 1:58:28 (The Lambert's)
Second 2:03:57 (Alicia Hoppenrath, Lauren Hughes, and Laura Beamish)
Third  2:07:24 (Julie Hughes, Keith Jones, Rebecca Ander)
We would like to thank ALL our volunteers for their time, energy and commitment in supporting the event. We could not do it without all the help. Also a big thank you to our sponsors, both local and off island. For the prize donations, food, water, financial support as well as lending of equipment.
from the Race Directors, Phil Osborne and Alicia Hoppenrath