The latest news on COVID-19 developments in Canada for Tuesday, Jan. 19 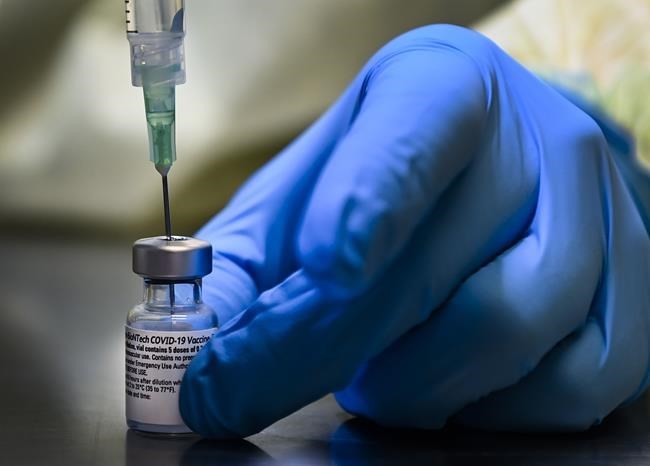 The latest news on COVID-19 developments in Canada (all times eastern):

B.C. has again extended its ongoing state of emergency due to the COVID-19 pandemic, 10 months after it was first declared on March 18, 2020.

It allows provincial officials to continue using extraordinary powers to combat the pandemic, including enhanced enforcement of public health rules.

The Ministry of Public Safety says in a news release that just under 700 tickets have been issued for violations related to public health measures since mid-August.

That includes 119 fines of $2,300 issued to owners or organizers who violated restrictions on gatherings and events and 548 fines of $230 issued to individuals who refused to obey law enforcement.

Saskatchewan Premier Scott Moe says he won't shut down all restaurants and bars because a few are flouting COVID-19 rules.

Instead, he says he's asking public health officials to look at more enforcement measures, such as forcing rule breakers to close.

Moe says "enough is enough" and is expressing frustration at a recent video that shows young people dancing without masks and mingling at a bar in Regina.

The province says there have also been 17 additional deaths.

There are 740 people in hospital, with 119 in intensive care.

British Columbia isn't getting about 5,800 doses of the Pfizer-BioNTech vaccine that it expected next week.

Health Minister Adrian Dix says the province is adjusting its vaccination plans as a result.

Dix says the province will use more of the Pfizer vaccine it has in stock to complete immunizations at long-term care homes and to administer second doses.

He says second doses are crucial to the success of the program and the province remains committed to giving the second dose 35 days after the first.

Ford expressed frustration about a delivery slowdown of the Pfizer-BioNTech shot that will see Ontario receive no doses next week and thousands fewer over the next month.

Ford appealed to Biden to share a million doses of the Pfizer-BioNTech shot, which is manufactured in Michigan.

He also expressed frustration with Pfizer executives about the delays and urged Prime Minister Justin Trudeau to ramp up pressure on the company to deliver more of the shots to Canada.

Public health officials in New Brunswick are reporting 31 new cases of COVID-19 and one additional death from the disease.

Chief medical officer of health Dr. Jennifer Russell says the death of a person in their 80s at the Parkland Saint John long-term care facility brings to 13 the number of COVID-related deaths in the province.

There are currently 316 active cases of COVID-19 in New Brunswick.

As of midnight tonight, the Moncton, Saint John and Fredericton regions will join the Edmundston region at the red level of the province's COVID recovery plan.

Health officials say there are 207 people in hospital and 31 people in intensive care.

Six more residents have also died, almost all of whom were 80 or older.

As of Tuesday, the province reports giving more than 24,000 vaccine shots.

The Northwest Territories is still investigating the source of new COVID-19 cases in the territory.

Three cases of COVID-19 were reported in Fort Liard over the weekend.

There are now more than 50 people in isolation in the community of about 500 in connection with the new cases.

There are four active cases of COVID-19 in the Northwest Territories and 24 recovered cases.

The territory has also administered 1,893 first doses of the Moderna vaccine to date.

Nova Scotia is reporting four new cases of COVID-19, giving it a total of 22 active cases.

One of the new cases is in the province's northern zone and is a close contact of a previously reported case.

The other three cases are in the central zone and are related to travel outside Atlantic Canada.

One of the cases is a university student who lives off campus and attends classes online.

The province is dealing with five active reported cases.

One person is recovering in hospital with the disease.

The province has reported a total of 396 infections and four deaths linked to the novel coronavirus.

With numbers decreasing in recent weeks, the government is proposing to ease several restrictions on business openings and public gatherings by the end of the week.

The possible changes, subject to public consultation, include allowing non-essential stores, hair salons and barbershops to reopen with capacity limits.

Another proposed change would ease the ban on social gatherings inside private homes to allow two visitors at a time.

Quebec Premier Francois Legault is calling on the federal government to ban all non-essential flights to Canada.

Legault says he's worried that people travelling to vacation destinations will bring new variants of COVID-19 back to the province.

While the premier says it may be difficult to determine which flights are essential, he says it's clear that flights to sun destinations are non-essential.

Procurement Minister Anita Anand says she has spoken to Pfizer and does not expect any more interruptions to its Canadian deliveries after mid-February.

Anand says Pfizer is contractually obligated to ship four million doses to Canada by the end of March.

Canada expects its shipments from Pfizer to be larger than previously expected from the middle of February until the end of March to make up for smaller shipments over the next month.

Maj.-Gen. Dany Fortin says Canada will get no doses of vaccine from Pfizer at all next week.

Fortin, the vice-president of operations at the Public Health Agency of Canada, says this week's shipment is almost one-fifth smaller than expected.

That means only 171,093 doses of the Pfizer-BioNTech vaccine will arrive over the next two weeks, instead of the 417,300 doses previously expected.

Fortin says the deliveries over the first two weeks of February have yet to be confirmed, but Pfizer is still expected to meet its contractual obligation to ship four million doses to Canada by the end of March.

The variants of the novel coronavirus identified in the United Kingdom, South Africa and Brazil could change the situation rapidly and he warns that Canada could impose new restrictions on the border at any time, without warning.

The province also reported 55 more deaths attributed to the novel coronavirus, including 16 that occurred in the prior 24 hours.

Health officials say hospitalizations rose by nine, to 1,500 and 212 people were in intensive care, a drop of five.

There are now seven active reported cases in the province.

P.E.I. has reported 110 cases of COVID-19 since the start of the pandemic.

Ontario is reporting 1,913 new cases of COVID-19 today, likely under-reported due to a technical error in Toronto.

There were 46 more deaths linked to the virus in Ontario.

Note to readers: This is a corrected story. A previous version said British Columbia expected to get 5,800 doses of the Pfizer-BioNTech vaccine next week.