VANCOUVER — Leon Draisaitl knows there's a spotlight fixed firmly on his teammate Connor McDavid as the Edmonton Oilers captain approaches yet another milestone. And the German sniper believes that's exactly the way it should be.
May 4, 2021 10:56 PM By: Canadian Press 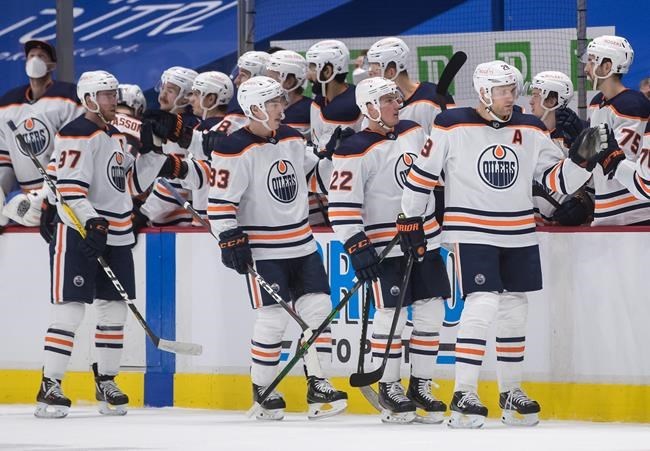 VANCOUVER — Leon Draisaitl knows there's a spotlight fixed firmly on his teammate Connor McDavid as the Edmonton Oilers captain approaches yet another milestone.

And the German sniper believes that's exactly the way it should be.

The entire Oilers locker room is pushing to get McDavid to the 100-point mark in the pandemic-condensed NHL season, Draisaitl said.

McDavid inched closer to the goal Tuesday as the Oilers topped the Vancouver Canucks 4-1. Draisaitl scored twice in the victory, with a pair of assists from McDavid, who leads the NHL in scoring with 93 points (31 goals, 62 assists) with five regular season game to go.

"He set me up twice. I mean that's really all I can say," said Draisaitl, who sits second in the league's scoring race with 75 points (26 goals, 49 assists).

"It's two nice passes, just had to make sure I bear down a little bit and obviously this time right now is about our team continuing to find our game, getting better every night and on the side it's obviously about him trying to reach that milestone."

It was the second night in a row the Oilers topped the Canucks, coming after Edmonton clinched a playoff spot with a 5-3 victory on Monday. McDavid and Draisaitl combined for six points in the win.

“You can’t lose sight of them for a second. You give them a little bit of room and they’ll make things happen," he said. "All five guys on the ice have got to be sharp, know where they are and try to take away their time and space.”

Darnell Nurse also had a goal and an assist for Edmonton on Tuesday, and Evan Bouchard rounded out the scoring for the Oilers (32-17-2).

Mike Smith stopped 28 shots for Edmonton and Thatcher Demko had 23 saves for Vancouver.

Brock Boeser put away the lone goal for the Canucks (19-25-3), who saw their losing skid stretch to six games.

The Canucks held the Oilers off the score sheet through a period and a half Tuesday until Draisaitl and McDavid sparked a wave of three straight goals midway through the second.

Draisaitl's first of the night came off a turnover by Vancouver's J.T. Miller deep in the Canucks end. McDavid picked off his errant pass and sent it out to Draisaitl, who rifled a snap shot over Demko's shoulder 14:29 into the middle frame to knot the score at 1-1.

Miller smashed his stick and loudly uttered a four-letter expletive in response.

A cascade of penalties then set the Oilers up for a pair of power-play strikes.

Edmonton was first to the box when William Lagesson was called for interference. Just 10 seconds into the man advantage, Vancouver's Tanner Pearson joined him for hooking.

Twenty-one seconds into the ensuing 4-on-4, Miller was called for a high stick that left the Oilers with a power pay.

Draisaitl was quick to capitalize, using a net-front screen by Ryan Nugent-Hopkins and blasting a shot past Demko from the top of the left face-off circle at 17:25.

Draisaitl's 26th goal of the season gave the Oilers a 2-1 lead.

Edmonton still had time on the Miller penalty and with less than a minute to go in the period, Bouchard beat Demko with his second goal of the season to make it 3-1.

The Canucks took the lead just 34 seconds into Tuesday's game.

Rookie Nils Hoglander powered into the Oilers zone and threw a pass over Nurse, who was sprawled across the top of the crease, trying to break up a play.

Boeser jumped on the puck and popped it in past Smith at the side of the net.

"Give Vancouver credit, they work hard, they make it hard on you," said Oilers coach Dave Tippett.

"We did a lot of things all right, gave up some chances, probably more than we'd like but that being said, you go out there and you do what you have to do to try to win the game. Limit chances against, limit mistakes and find a way to win. Between (Smith) and some good penalty killing we were able to do that."

Edmonton was 2 for 3 with the man advantage while Vancouver failed to score on four power plays.

The Oilers sit second in the all-Canadian North Division, six points behind the Toronto Maple Leafs. The Canucks remain at the bottom of the standings with nine games left in their season.

Edmonton holds a 5-2 edge in the 10-game season series between the two sides. The contest will continue Thursday when the Canucks visit Edmonton.

NOTES: Boeser's goal was his 19th goal of the season and the 200th point (94 goals, 106 assist) of his NHL career. … Vancouver defenceman Jack Rathbone made his NHL debut. The Canucks selected him 95th overall in the 2017 draft. He has two goals and seven assists in eight games this season with Vancouver's American Hockey League affiliate, the Utica Comets. … Canucks left-winger Tanner Pearson played his 500th NHL game.

This report by The Canadian Press was first published May 3, 2021.