A stand-off during his playing career, Laurent Frayssinous pulled the strings on the field. "Call it the brains of the team," he said with a laugh, before diplomatically noting that the other halfback and hooker also orchestrate the attack.
Jul 2, 2020 1:34 PM By: Canadian Press 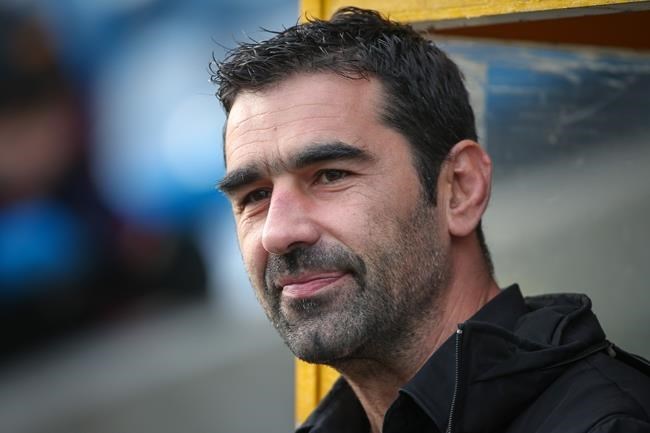 A stand-off during his playing career, Laurent Frayssinous pulled the strings on the field.

"Call it the brains of the team," he said with a laugh, before diplomatically noting that the other halfback and hooker also orchestrate the attack.

Now the former French international gets to help build a team from scratch as the first head coach of the Ottawa Aces.

Ottawa president Eric Perez introduced the 43-year-old Frayssinous in a virtual news conference Thursday. The Aces are scheduled to begin play in 2021 in the Betfred League 1, the third tier of English rugby league.

"There are a lot of things to think about but it's very exciting," Frayssinous, who won 31 caps for France between 1998 and 2005, said in an interview.

Frayssinous coached the Catalan Dragons from 2012 to '17, departing the Super League club after a five-game losing streak left the French team in ninth place.

Frayssinous played for Lezignan, Limoux and his hometown club Villeneuve before joining the Dragons in 2003. He retired at the end of the 2006 season, joining the Catalan coaching staff for the 2007 season.

In October 2012, he became the Dragons' first French head coach when he succeeded Trent Robinson, who left to take over the NRL's Sydney Roosters.

Catalan spent a couple of seasons building its roster for its 2006 entry into Super League, experience that Frayssinous says will be valuable in his new role.

"I will bring that to Ottawa," he said, adding he will sign players with an eye to the future.

Since leaving Catalan, he has done some coaching with the RC Narbonne rugby union team.

Perez said the bilingual Frayssinous ticked all the boxes.

"Experience, coaching at the highest level. The experience of taking a foreign team, bringing it into Super League and dealing with all the travel and all the bits and pieces around that," he told the news conference.

Frayssinous, who lives in the south of France near Perpignan, has never been to Canada but says he has heard nothing but good things.

He expects to hold training camp either in England or France, citing the better weather in the south of France as an attraction. During the season, the team will be based in the north of England and commute to Canada for chunks of the schedule.

"It will be up to me and my coaching staff to be careful with injuries because the travel will be harder. But it will only happen twice or three times a year," he said.

Frayssinous and his partner have been together since he was 17 and she was 15. They have two kids — a 14-year-old son and seven-year-old daughter.

He says the family will initially stay at their home in France, joining him "wherever we are" during school holidays.

"They are pretty excited, not to go to England, but to come to Canada and enjoy the lifestyle over there," he said with a laugh.

Perez is no stranger to building teams, having been the founder and first CEO of the Toronto Wolfpack. Perez and a consortium of some 26 people bought the license to England's Hemel Stags in September 2018, with a view to moving the franchise to Canada.

The fledgling transatlantic rugby league team is planning tryouts for elite Canadian athletes in October in Ottawa, pending any COVID-19 restrictions. Perez has said he wants to develop and promote Canadian talent.

"It's definitely one of things we want to do, Eric and I, even if they don't have the rugby league experience," he said. "It definitely will take time.

"But when you are powerful and you are fast, it's only a matter of time to learn the rules and the way the coach wants you to play."

Frayssinous says he is willing to be patient with domestic talent, giving those players who make the roster a taste of the game in the first season and building up their participation in subsequent years.

The Aces will play out of TD Place Stadium.

The Wolfpack, who have climbed their way into the top-tier Super League, started life in League 1 in 2017.

This report by The Canadian Press was first published July 2, 2020.