COVID-19 took its toll on preparations for the MLS is Back Tournament on Wednesday with news that six FC Dallas players had tested positive and the Vancouver Whitecaps had postponed their flight to Florida due to a pair of "inconclusive" test results
Jul 1, 2020 2:16 PM By: Canadian Press 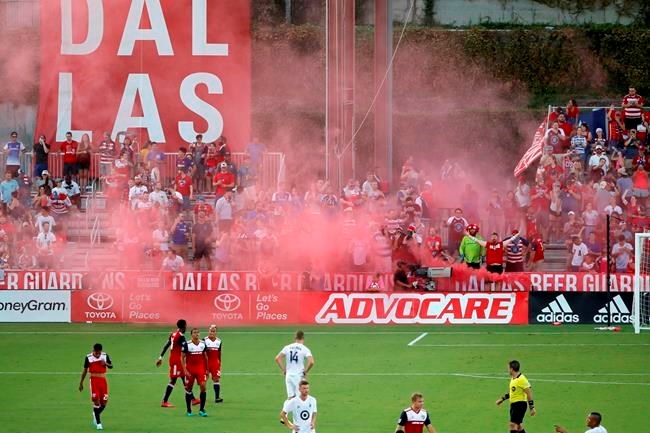 COVID-19 took its toll on preparations for the MLS is Back Tournament on Wednesday with news that six FC Dallas players had tested positive and the Vancouver Whitecaps had postponed their flight to Florida due to a pair of "inconclusive" test results.

Coincidentally the two teams are slated to meet July 9 in the first game for both at Disney's Wide World of Sports Complex in the Orlando area.

The Whitecaps were slated to fly by charter Wednesday but held off after the inconclusive COVID-19 Polymerase Chain Reaction (PCR) test results required follow-up tests.

The club said subsequent test results were confirmed to be negative.

"It is paramount we make certain all precautions are taken and as a result we postponed today's flight and the entire travelling party will be tested again (Thursday)," Whitecaps CEO and sporting director, Axel Schuster, said in a statement.

"Throughout this pandemic, we have had daily communication with the provincial public health officer, local health authorities, infectious disease experts, and the league to ensure the safety of our players, staff, and community."

No member of the club has tested positive to date.

That's not the case with FC Dallas. The league said two of its players tested positive upon arrival Saturday at the league's host hotel in Florida. The other four tested positive within the last two days.

All six were assessed and moved to the isolation area of the hotel where they continue to receive "remote care from a health-care provider," the league said,

The rest of the FC Dallas delegation, following MLS health and safety protocols, are quarantining in their hotel rooms pending results of additional COVID-19 testing.

The league says no other members of the MLS delegation at the host hotel have tested positive, and no other club has been in contact with the FC Dallas party since it arrived in Florida.

League protocols include regular screening, testing, social distancing, person protective equipment and a mandatory quarantine for all individuals upon arrival at the hotel until they have a negative test.

It says so far 392 people have been tested with six positives.

In a non-COVID emergency, the San Jose Earthquakes reported that defender Marcos Lopez had undergone an appendectomy Tuesday at an Orlando hospital. The club said his recovery is expected to last two and four weeks.

The Earthquakes, the first team to arrive in Orlando, are in the same tournament group as Vancouver, Dallas and Seattle.

The Montreal Impact are due to fly south Thursday, one day ahead of Toronto. The World Cup-style tournament runs July 8 to Aug. 11. MLS has been on hiatus since March 12 when play was suspended two weeks into its season.

Dallas suspended its voluntary individual player workouts on June 3 after announcing a player had tested positive for COVID-19.

At the time, the league said it was the second-known positive case among MLS players. Philadelphia Union forward Kacper Przybylko tested positive in March.

This report by The Canadian Press was first published July 1, 2020.