Toronto-based welterweight Samuel Vargas will face unbeaten Conor (The Destroyer) Benn on April 10 in the United Kingdom.
Jan 18, 2021 11:51 AM By: Canadian Press 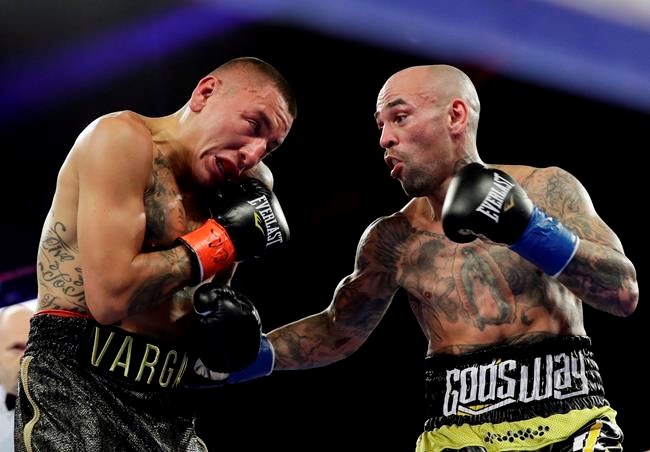 Benn, the son of former world champion Nigel Benn, ran his record to 17-0-0 in November with a decision over Germany's Sebastian Formella. The 24-year-old Benn is currently ranked 11th by the WBA.

Vargas (31-6-2) last fought in July when he was stopped in the seventh round by unbeaten Vergil Ortiz Jr. in Indio, Calif. That fight was originally scheduled for March 28 but was postponed due to the COVID-19 pandemic.

“I’m excited to get back in the ring and test one of the guys they say is the future of the welterweight division, but I don’t think it’s his time yet,” Vargas said in a statement. “I’ve stood toe-to-toe with the best fighters in this division and I’ve never even touched the canvas. I know what it takes to be at the top level, and I want to prove that I can still be there.”

The Colombian-born Vargas has lost three of his last five fights, dropping decisions to Luis Collazo and Ami Khan.

This report by The Canadian Press was first published Jan. 18, 2021

Powell, Lowry do their bit but undermanned Raptors beaten handily by the Pistons
Mar 3, 2021 7:50 PM
Comments

1
Bowen Islanders will be able to get vaccinated on island
2
Verdict in Toronto van attack case and new vaccine arrives: In The News for March 3
3
Seniors line up at COVID-19 vaccination site in York Region, families express relief
4
Bowen Island sex offender found not guilty of probation breach
5
‘It’s pretty amazing, this island’: Bowen Islanders step up to help local man who has brain cancer