MEXICO CITY — After watching his side exit the Scotiabank CONCACAF Champions League at the hands of a very good Cruz Azul team, Toronto FC head coach Chris Armas took a brief break from his stated "no excuses" policy.
May 4, 2021 10:24 PM By: Canadian Press 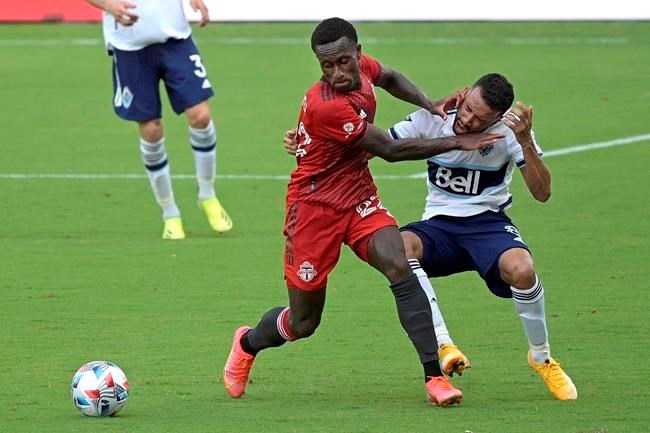 MEXICO CITY — After watching his side exit the Scotiabank CONCACAF Champions League at the hands of a very good Cruz Azul team, Toronto FC head coach Chris Armas took a brief break from his stated "no excuses" policy.

He paid tribute to his players by listing off the many obstacles TFC had to face en route to a 1-0 defeat Tuesday and 4-1 aggregate loss to the Mexican league leader in the quarterfinal of CONCACAF's flagship club competition.

"These guys have been dealt a difficult hand — no home field, away from their families, a tough stretch back in Canada, our DPs (designated players) are not healthy at the moment. So many little things," Armas said. "A really difficult draw in the Champions League. Hot days for games midday. Short rest.

"And these guys, not once did they make one excuse But it's important to be said that this team sticks together … We showed up tonight with a belief and a plan."

Captain Michael Bradley went at it a different way.

"Games in this competition are high-level. You understand that you have to be at your best to give yourself a chance. You have to make plays in key moments."

An undermanned TFC wasn't and didn't.

The Mexican league leader won comfortably on the night and across both legs to cruise into a semifinal against either defending MLS champion Columbus Crew SC or Monterrey in the August semifinals. Monterrey hosts Columbus on Wednesday in Mexico with the aggregate score at 2-2.

Cruz Azul's 3-1 victory last week at Tampa's Raymond James Stadium meant Toronto had to score at least three goals Tuesday, with the degree of difficulty escalating if the Mexican side scored.

Bryan Angulo, who scored twice in the opening leg, added to the aggregate lead in the 28th minute with a looping shot from 30-plus yards out that a backtracking Alex Bono could not get a hand to.

Fullback Justin Morrow provided an inadvertent assist, his attempt at a headed clearance off a Cruz Azul goal kick deflecting high and back towards his own goal. The ball bounced once to the side of Angulo, who was in space between the Toronto centre backs, allowing the Ecuadorean forward to swing his right leg through it for a spectacular strike.

The goal, Angulo's fourth of the tournament and third against Toronto, seemed to take some of the air out of TFC.

"We congratulate the scorer, not blame TFC," Armas said of the goal.

The rest of the game offered little drama in an empty Azteca Stadium.

Angulo had opened the scoring in the first leg with a third-minute wonder-strike, curling a superb right-footed shot from just outside the penalty box into the far corner past Bono.

Toronto was without all three designated players. Spanish playmaker Alejandro Pozuelo remains out with a thigh injury, star striker Jozy Altidore was feeling unwell and newly signed Venezuelan winger Yeferson Soteldo was finishing out his quarantine in TFC's adopted home of Orlando.

"It's a shame for Jozy and for us, but he'll be back and doing his thing," he said.

Toronto endured a COVID-19 outbreak back home before setting up shop in Orlando due to pandemic-related travel restrictions. Wednesday marked the sixth stadium the nomadic team has played in this season.

On the plus side, fullback Richie Laryea returned from suspension and influential centre back Chris Mavinga made his first start of the season after being sidelined by a calf injury.

Ayo Akinola started in place of Altidore. Nick DeLeon also got the start with Auro, Eriq Zavaleta and Ralph Priso dropping out,

Cruz Azul, which tops the Liga MX standings at 13-2-2, extended its unbeaten run to 19 games (16-0-3) in all competitions. In contrast, Toronto (0-1-1) has yet to win in the young MLS season, although it did dispatch Mexico's Club Leon in the Champions League round of 16.

Toronto had an MLS bye on the weekend and had not played since the first leg. Cruz Azul tied Tijuana 1-1 on Saturday in Liga MX play.

The Mexican side looked to play direct, sending balls over the Toronto backline with players racing after then.

Bono was called into action early, pushing aside a powerful shot from Walter Montoya from just inside the penalty box two minutes in. DeLeon found Jonathan Osorio at the back post in the seventh minute but his goal-bound header hit defender Adrian Aldrete.

Set plays continued to cause Toronto problems with Bono having to push away a header from an unmarked Pablo Aguilar off a 13th-minute corner. The Paraguayan centre back scored on a header from a free kick in the first leg.

DeLeon, sent in alone, beat Jesus Corona in the 18th minute but the goal was called back for offside.

Armas attributed the first-leg loss to poor set piece defending. But he was happier with the performance Tuesday.

"We left everything on the field," he said.

The TFC tank was never full, however,

It marks Cruz Azul's first trip to the semifinals since 2013-14 when it won the tournament. Toronto reached the final in 2018, losing to Guadalajara in a penalty shootout.

This report by The Canadian Press was first published May 4, 2021