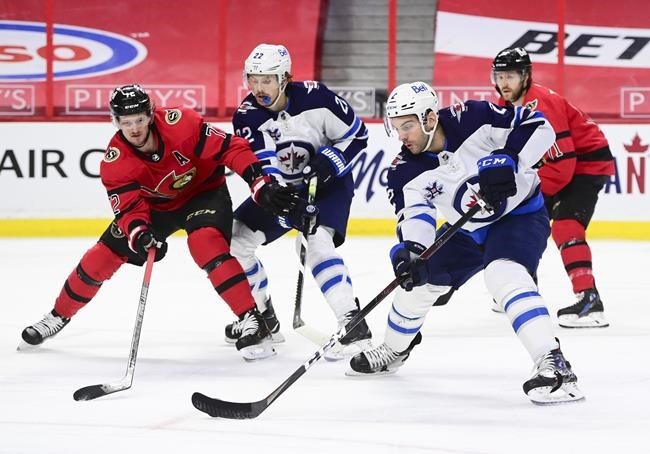 Mathieu Perreault and Trevor Lewis scored third-period goals to secure Winnipeg a 3-2 win over Ottawa on Wednesday night. With the victory, the Jets improved to 11-1-2 following a regulation loss as they were coming off a 4-2 defeat to the Senators on Monday night.

"I think it starts with leadership, those guys get everyone going," Lewis said. "We have a tight group in there, we know how to win.

"We know we just had to stick with it there and came out and had a good third."

Winnipeg also held Brown without a goal for the first time in nine games. His eight-game goal streak was the longest in the NHL this year and Brown was looking to become the first player since Teemu Selanne in 1997-98 to score in nine straight contests.

Brown did register an assist, though, to extend his point streak to nine games.

After a scoreless second period, Perreault put Winnipeg ahead 2-1 at 2:07 of the third. Perreault fired a high shot past Ottawa goaltender Matt Murray on the power play for his ninth goal of the season that also sent the goaltender's water bottle flying.

"That was pretty sweet," Perreault said. "(To) hit the water bottle like that doesn't really happen often.

"The sound that it makes was pretty cool."

But it was Lewis who broke Ottawa's back, scoring shorthanded at 9:39 to put Winnipeg ahead 3-1. Lewis registered his third of the year.

"It was a tight game throughout the whole thing," Lewis said. "We knew they were going to come hard and we needed to keep it simple.

"In the third we got a big power-play goal from (Perreault), that was an awesome shot. Obviously with the short-handed goal it was a big win for us."

Josh Norris's power-play goal, and 12th of the season, with 10 seconds pulled Ottawa to within 3-2.

Mark Scheifele had the other goal for Winnipeg (26-14-3), which earned its fourth win in five games and moved to within five points of the North Division-leading Toronto Maple Leafs (28-11-4), who were idle.

Murray, who finished with 32 saves, made his first start in goal for Ottawa since March 10. He suffered an upper-body injury in warmups before a game against Toronto on March 14.

"I felt pretty good all things considered," Murray said. "It has been quite some time so (my) timing felt a little bit off.

"Traffic is hard to duplicate in practice. In a game there's just so many layers. That's always the biggest adjustment when you haven't played in a while. They did a good job of getting traffic to the net but all things considered I felt pretty good."

Ottawa opened the scoring with Paul's fourth goal of the season just 1:19 into the contest. But Scheifele countered at  3:24, converting Nikolaj Ehlers' nifty backhand pass for his 16th of the year as Winnipeg outshot the Senators 11-9.

Laurent Brossoit played in goal for Winnipeg after Connor Hellebuyck had made seven straight starts. Brossoit finished with 27 saves.

Lewis said despite Brossoit's inactivity, the Jets felt confident with him in goal. Hellebuyck is expected to be back on the ice Thursday when Winnipeg visits Toronto.

"Shooting on (Brossoit) in practice we all know how good he can be," Lewis said. "So every time he's in the net we feel comfortable knowing he's back there and going to make the saves.

"We're lucky to have him as a backup for sure."

Added Brossoit: "Getting into a rhythm is a huge help and when you can't play for a couple of weeks its all about your practice habits. I was feeling good leading up to this game."

Ottawa defenseman Jacob Bernard-Docker played 15 minutes 33 seconds in his first-ever NHL contest. He was a late addition to the Senators lineup after defenseman Nikita Zaitsev suffered a lower-body injury in the pre-game warmup.

This report by The Canadian Press was first published April 14, 2021.