EDITORIAL: The story of Bowen Island is under the romantic influence

Reflecting on the stories we tell ourselves about Bowen Island
Dec 7, 2020 2:51 PM By: Bronwyn Beairsto 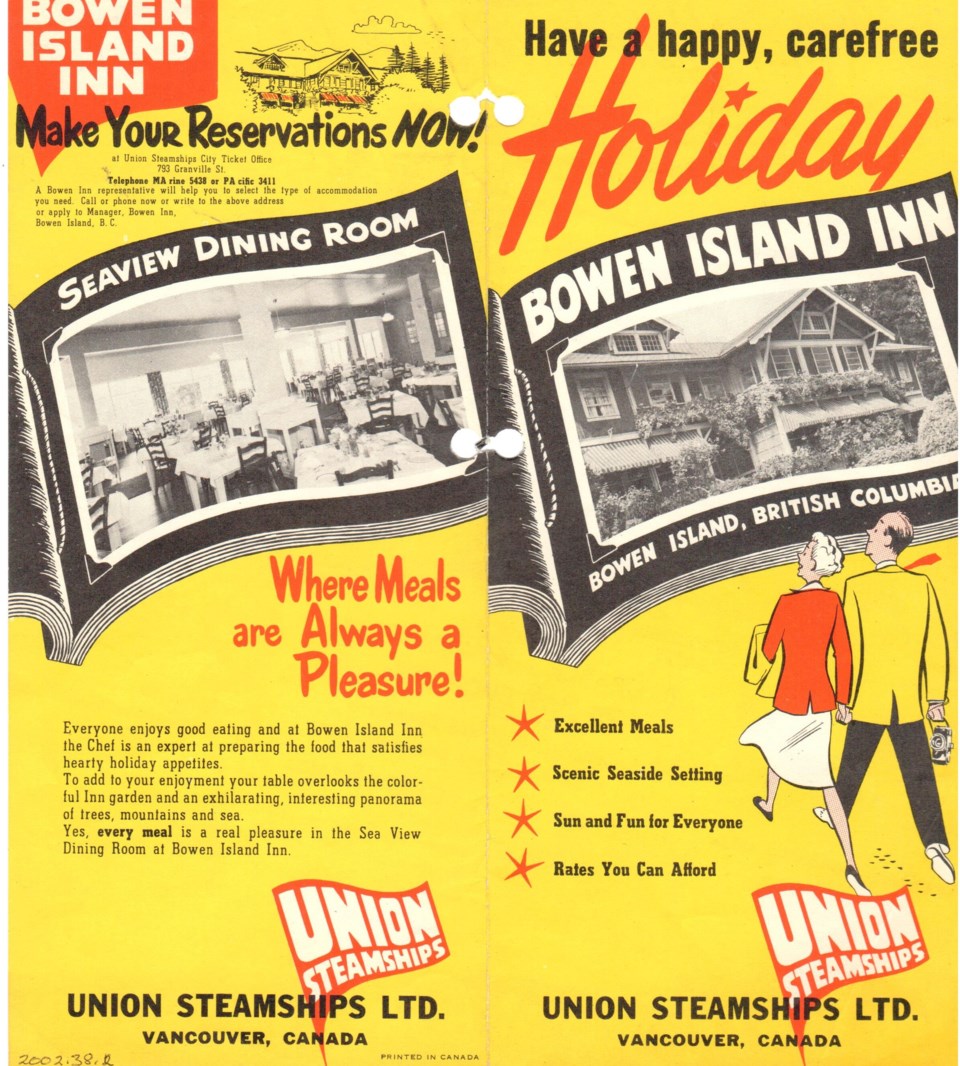 A brochure from the Union Steamships era. (Photo: Bowen Island Museum and Archives)

The following is part of the Undercurrent's special 100th anniversary of USSCo. & Bowen Island feature. ​​​​​​​

I have to start with the Yukon.

It, like Bowen Island, is a land of romantic appeal –– home of the Klondike Gold Rush and the Alaska Highway “punched through the wilderness” –– beckoning tourists with the allure of long-gone eras (and settler-constructed myths.)

Yukon is also where Captain John Cates, in the gold rush, gained some of the funds that that made it possible to create the Terminal Steamship Company and purchase Joseph Mannion’s property that would become a seaside resort.

Union Steamship Company (also known in the day as Union Steamships or the Union) bought Cates’ company and property in 1920 (the anniversary we’re celebrating) and built on his legacy to create “the Happy Isle.” The legendary resort became at once a picnicker’s oasis, a family-friendly getaway and locale for renowned debauchery until the resort’s demise in the 1950s.

Today, when we tell ourselves the story of Bowen Island, Union Steamships inevitably has a starring role. “Resort town” was our defining characteristic of last century.

Historian Jack Little noted in his 2018 talk ‘In the metropolitan shadow: Bowen Island,’ that in recent years, “Bowen Island has disappeared from the mental landscape of Vancouverites.” We’re no longer last century’s famed resort juggernaut, though we still play into the “away from it all” identity, especially for tourism purposes.

Beyond the streets that carry the names of Union ships or the Cove’s geographical puzzle that emerged from the company’s piecemeal sales, of all the communities served on the B.C. coast, Bowen claimed the name.

Perennial local controversies of today –– environment vs. development, tourism vs. isolationism, ferry fares and service –– were issues in the USSCo. days, if Irene Howard’s classic history Bowen Island 1872-1972 is any indication.

Howard also noted, “When I talked to people about their island, the very name evoked little gusts of nostalgia, mostly for the moonlight cruises on the Lady Alexandra.”

How many people have ended up on Bowen because of memories of those midnight cruises or weekend getaways?

But romantic ideals often outshine stories we don’t want to tell. In the Yukon, the very aspects that lend it legendary romance (the gold rush and highway) were disruptive and destructive forces for many.

On Bowen, what are the stories we don’t tell because it doesn’t fit with our tourism spiel? What were and are the ‘open secrets’ guarded by the small-town life –– who are the people excluded from the narratives?