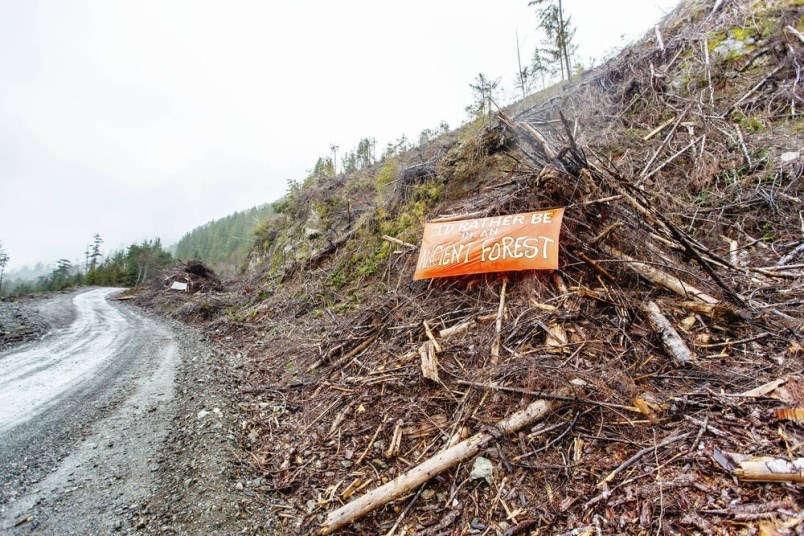 Clearcut along the Granite Main road near the Fairy Creek blockades near Port Renfrew. Trevor Hancock argues that the provincial government is not protecting old-growth forests and the biodiversity they contain in the face of the determination by the forest-destruction industry to log as much old growth as they can, as quickly as they can. Darren Stone / Times Colonist

Since last week’s column about B.C.’s sad new reputation as a hot spot for biodiversity loss, a troubling report — the B.C. Biodiversity Report Card — was released by the Wilderness Committee and Ecojustice.

For those unfamiliar with these organizations, Ecojustice is Canada’s largest environmental law charity, taking on public interest cases to defend nature, combat climate change,and fight for a healthy environment for all, while the Wilderness Committee works to preserve wilderness, protect wildlife, defend parks, safeguard public resources and fight for a healthy climate.

The report was also reviewed by Prof. Sarah Otto, a distinguished zoologist and former director of the Biodiversity Research Centre at the University of British Columbia, and Justina Ray of the Wildlife Conservation Society Canada

All of which is to say, I trust this report, which is a review of the extent to which the Aichi Targets have been met in B.C. The targets are a key part of the 2011-2020 Strategic Plan for Biodiversity, established under the Convention on Biological Diversity by the nations of the world in 2010. Not only is Canada a signatory, we host the CBD Secretariat in Montreal.

The plan “required all governments to make measurable progress in conserving the planet’s wildlife and natural systems by the end of 2020,” notes the B.C. Report Card. It laid out 20 goals in five strategic areas, including mainstreaming biodiversity across government and society, reducing the direct pressures on biodiversity and promoting sustainable use, safeguarding ecosystems, species and genetic diversity, and enhancing the benefits to all from biodiversity and ecosystem services.

So how are we doing? The UN Environment Program’s 2020 report “Making Peace with Nature” is blunt: “None of the global goals for the protection of life on Earth have been fully met, including those in the strategic plan for biodiversity 2011–2020 and its Aichi biodiversity targets.” None, not one! Globally, only six of the 20 targets have been even partially met.

Here in B.C., where we have “the richest biodiversity in Canada, but also the highest number of species at risk,” things are not any better. “Under Canada’s laws,” the B.C. Report Card notes, “British Columbia has primary responsibility for protecting biodiversity within the province, including most species, natural habitats, and landscapes.”

Sadly, Ecojustice and the Wilderness Committee gave B.C. a failing grade in four of the five areas they considered: protection and recovery of both species at risk and ecosystems, the protection of natural habitats of all species and ecosystems and other laws to protect biodiversity. Only one area got better than an F, with B.C. attaining a C- by protecting 15.5 per cent of its land base (the Aichi target was 17 per cent).

Among the major failures noted is the absence of a species at risk act, making B.C. — with its rich but at-risk biodiversity — “one of the few remaining provinces without a stand-alone law” to do this. Other failures include not protecting enough land to save most of B.C.’s wildlife and not reducing “the loss of all natural habitats by 50 per cent from 2010 levels.”

The failure to meet the 2017 commitment by Premier John Horgan to enact a species at risk law is one of the outstanding betrayals of the B.C. environment by this government, along with their continued support for LNG fracking and their failure to protect old-growth forest.

Indeed, the Fairy Creek blockade epitomizes the NDP’s failure. Right in the premier’s own constituency, the RCMP are hauling people away for doing what the NDP is not doing: protecting old-growth forests and the biodiversity they contain in the face of the determination by the forest-destruction industry to log as much old growth as they can, as quickly as they can.

In fact, the Wilderness Committee reported earlier this month, based on government data, that there had been a 43 per cent increase in approved old-growth cutblocks in the 12 months from April 30, 2020.

The B.C. Report Card states: “we are in the midst of a biodiversity crisis on par with the climate crisis.”

When will the government wake up to this crisis, stop the assault on B.C.’s biodiversity and introduce the strong, innovative biodiversity law recommended by the Old-growth Strategic Review Panel?

Trevor Hancock is a retired professor and senior scholar at the University of Victoria’s School of Public Health and Social Policy.