Opinion: It's time to ditch school dress codes for good

Sexist dress codes continue to perpetuate rape culture. Throw in racism and classism, and it's time to move B.C. schools' policies into the 21st century.
Feb 26, 2021 12:05 PM By: Julie MacLellan 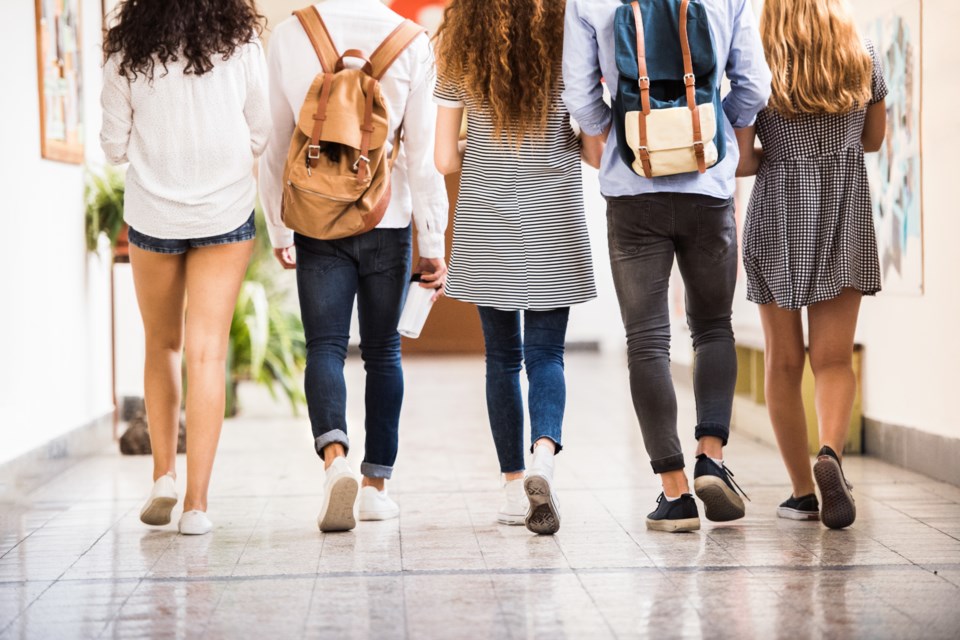 Are these outfits "appropriate" for school? The policing of teenage girls' bodies through school dress codes is a relic of our patriarchal history, and it needs to end.Getty Images

I just watched my eight-year-old daughter head out for school, dressed, as she usually is, in leggings, T-shirt and ever-present hoodie.

And I couldn’t help wondering, as I watched her skinny young colt legs striding down the sidewalk, how long it will be before somebody takes offence to something she’s wearing because her leggings are too form-fitting or her T-shirt shows too much skin.

This nonsense over policing schoolgirls’ bodies is beyond tiresome, and it needs to stop.

A quick recap for those who’ve managed to miss the headlines this week: On Tuesday, Grade 12 student Karis Wilson was sent home from NorKam Senior Secondary School in Kamloops because she was told her outfit was making a (female) teacher and a (male) student teacher feel “uncomfortable.”

For the record, she was wearing a white turtleneck under a black dress that happened to have thin straps and some lace trimming. Whether it was the straps, the lace or the fact that the outfit was form-fitting that was causing the alleged potential discomfort is unclear – and entirely irrelevant.

I’ll say this once, and loudly, for those who’ve managed to miss this message for the past several decades:

GIRLS AND WOMEN ARE NOT RESPONSIBLE FOR THE 'FEELINGS' OF ANY OTHER PERSON REGARDING THEIR CLOTHES, APPEARANCE OR BODIES.

The people who have these “feelings” are often male but, as we’ve seen, can also be female. (I’d insert a side essay here about internalized misogyny, but I’ll save that for another day.)

Memo to those people: If a girl’s outfit makes you uncomfortable, the problem is not hers. It’s yours. Deal with it however you like – look away would be one super-simple suggestion here – but don’t expect her to carry your baggage for you.

The whole notion that your feelings mean she needs to change is so ludicrous that it’s actually funny. Or, rather, it would be funny if it weren’t so embedded in a long and patriarchal history of North American society (read: men) policing women’s clothing.

Anyone recall the story of Elizabeth Smith Miller, who designed the pants-like garment that would become known as “bloomers” thanks to women’s rights campaigner Amelia Jenks Bloomer? That was 1851. The pantaloons became a symbol of the fight for women’s rights – among their devotees was early suffragist Elizabeth Cady Stanton – but didn’t catch on as broadly socially acceptable.

Nor did any kind of widespread pants-wearing by women in public, really, despite some brief forays into women wearing pants during both World Wars, when they took on jobs usually done by men.

It wasn’t until the women’s rights movement of the 1960s and ’70s that the issue shot back into public consciousness. You’ll find many Boomer women today who remember winning the right to wear pants to school in the 1970s. (They were one generation before me; thanks to their fight, my Gen X sisters and I could wear pants to school without anyone batting an eyelash.)

Mind you, it took another generation yet before pants became acceptable as female work attire. My random Google fact this morning: Women were not allowed to wear “trousers” on the U.S. Senate floor until 1993.

We can look at the whole thing now as ridiculous and shake our heads about the laughable notion that it was somehow scandalous to reveal that girls and women (gasp!) had legs.

Karis’s story from this week could have been a story from St. Joseph’s High School, Barrie, Ont., circa 1988, when I was a student there. I remember teachers with rulers, checking to ensure shorts and skirts were close enough to the knee. If they weren't, the offender was likely to be sent home to change.

It was wrong then. And it’s wrong now.

I called up a random sampling of current British Columbia school dress codes in a Google search this morning. What I found was a still-present tendency to focus on “distraction” in deciding what constitutes appropriate school wear. That is, students are not to wear clothes likely to “distract others” or that will “detract from the learning environment.”

Many policies mention spaghetti straps and bare midriffs. Others specify the appropriate length of skirts and shorts. Still others focus on girls’ breasts – some quite overtly (yes, I did see the use of the word “cleavage”) and others somewhat more obliquely by referring to “modest necklines.”

An emphasis on female “modesty,” however you may couch it in terms of encouraging learning, is a perpetuation of rape culture. Full stop.

Take the fact that a shirt deemed “modest” on one skinny, small-chested girl is likely to be deemed “inappropriate” on a more curvaceous classmate. Middle school and high school girls have enough physical issues to contend with in their rapidly changing bodies without having to worry about whether their breasts are going to become the subject of a dress code violation.

Moreover, there’s an implicit classism in the built-in assumption that every child will have a full wardrobe of properly fitting, “appropriate” clothing for school. Anyone ever sent their kid to school in something that’s too short or too tight because that kid had an overnight growth spurt and suddenly nothing fit? Take that fact, and then add in the complication that you can’t afford to buy your kid a new wardrobe until some money comes in next month, so said kid is going to have to go to school in those too-short T-shirts and clinging pants until that happens. Yeah, a dress code violation is exactly what that kid needs to help them learn.

And lest we forget, our old friend racism is lurking in these codes too, as references to “gang culture” open the door to racial profiling and unfair targeting of BIPOC students.

TIME TO ENTER THE 21st CENTURY

If we must have dress codes, then schools and school districts should revise those codes in a manner that reflects the actual challenges of learning in the 21st century.

By all means, implement dress codes making it clear that you won’t accept clothes with slogans or symbols that glorify weapons or violence, or that encourage hate and discrimination in all its forms. (Some B.C. school districts have already done this work. Those who haven't should probably think about doing so, sooner rather than later.)

But really, kids’ wardrobe choices are a minor matter in the face of all the actual work our society needs to do.

So here’s an idea: Instead of worrying about whether you can see a girl’s breasts or whether her shoulders are showing, maybe just turn your attention towards building a school culture that paves the way for active anti-racism, anti-sexism, anti-homophobia and inclusion of all students.

That’s all a whole heck of a lot more important than whether Karis’s lace-trimmed dress made somebody feel “uncomfortable.”

Schools need to stop telling girls their clothing distracts goofy boys
May 20, 2019 9:07 AM

He's on the job for equity and inclusion in New Westminster schools
Feb 5, 2021 6:10 PM
Comments