The power surge that killed my radio star 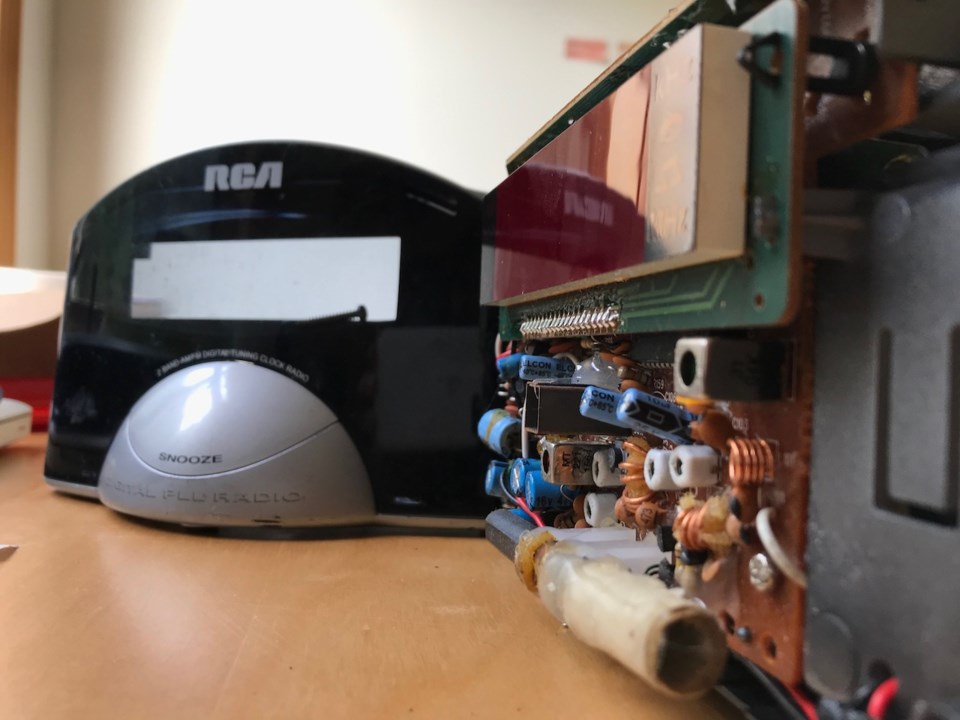 Despite what I thought was a surge-protecting power bar, my hardy RCA two-band digital tuning clock radio died last Tuesday morning with a resolute pop.

It was the end of a beautiful friendship.

In grade five, the brother I’d long shared a room with, was finally moved into the basement with our younger brother. I, as the eldest child and only girl, got my own abode, painted it lime green, and after pestering my parents for months, got a clock radio for my 11th birthday.

I used to lie on my colourful rag rug, sandwiched between my bed and cinderblock-particleboard bookshelf and listen to 87.7 FM, CBC TV, as watching TV on the old living room set was a sure way to be enlisted into washing walls, vacuuming or dog poop duty.

That radio, my radio, was a means of independent entertainment before internet was readily available. I’d listen to Stuart McLean on Sundays, switch over to the classical music on CBC 2 or tap through one of the other three stations offered in my home town.

Taking on the Herculean feat of rousing an obstinate not-morning person, this clock has woken me up for elementary school, high school, exams, graduations and work for 17 years. (Or tried to).

The radio travelled with me from Whitehorse to Newfoundland for my undergraduate degree and Anthony Germain at the St. John’s Morning Show replaced CBC Yukon’s Sandi Coleman. The clock became the bane of any roommate as the letters of the off button had long ago worn away and unplugging the beast became its off-switch.

It came with me to journalism school, tuning into Robyn Bresnahan with OttawaMorning. By that point my long-time roommate knew how to turn it off (we both started our graduate degrees in the capital the same year).

By the time I got to Bowen, two of the clock’s digital lines spelling out numbers weren’t working but that didn’t impede function. The buttons were sticky, sometimes going backwards wasn’t possible and one would have to fast forward through the entire day to get to the right time. But it still worked.

Even at my Bowen home, where reception is weak, Stephen Quinn’s voice found its way through the aged hunk of plastic and wires.

It was over this same clock radio this year I listened to Prime Minister Justin Trudeau’s COVID addresses to a scared country, every morning at 8 a.m. for weeks, and Canada and the world plunged into a new era.

As I heard the sharp pop among the cacophony of beeps and screeches of unhappy appliances,  the faint smell of burnt rubber an ominous sign, I’d hoped the dying sound was from something replaceable, like my computer (ok, I’m glad it wasn’t my computer). But my chunky, ugly clock radio had sounded its last alarm and relayed its last newscast.

I dislike new for the sake of new. Like Bowen in Transition’s (pre-covid) fix-it fairs, I believe in sapping every ounce of use out of something.  So naturally, I tried to take apart my radio to fix it (no, I don’t have experience in fixing electronics. Yes, this was stupid). Using a combination of a pocket knife and slot head screw driver, I tried to pry it open. Long story short, my clock radio is (now) really and truly, forever broken.

I’ll probably keep it on my shelf a while as a matter of interest, the insides are colourful and rather neat to look at. But my phone will easily slide into its place at my bedside and I’ll soon forget the red glow and familiar static of my radio. In a year of deep loss, this doesn’t even register. But, it is nice to remember in a disposable culture, the things that last.

Canadians pounce on cat-ownership opportunities during pandemic: poll
Mar 4, 2021 6:00 AM