A Bowen house that beats the weather and hydro bills

Walking from the icy Bolton Road driveway to the newly built home belonging to Andrew Brownsword, Andrea Stevenson and their daughter Maryanne, you will pass by a rustic little cabin that served as the family’s home while the new place was under cons
Jan 22, 2017 1:41 PM By: Meribeth Deen 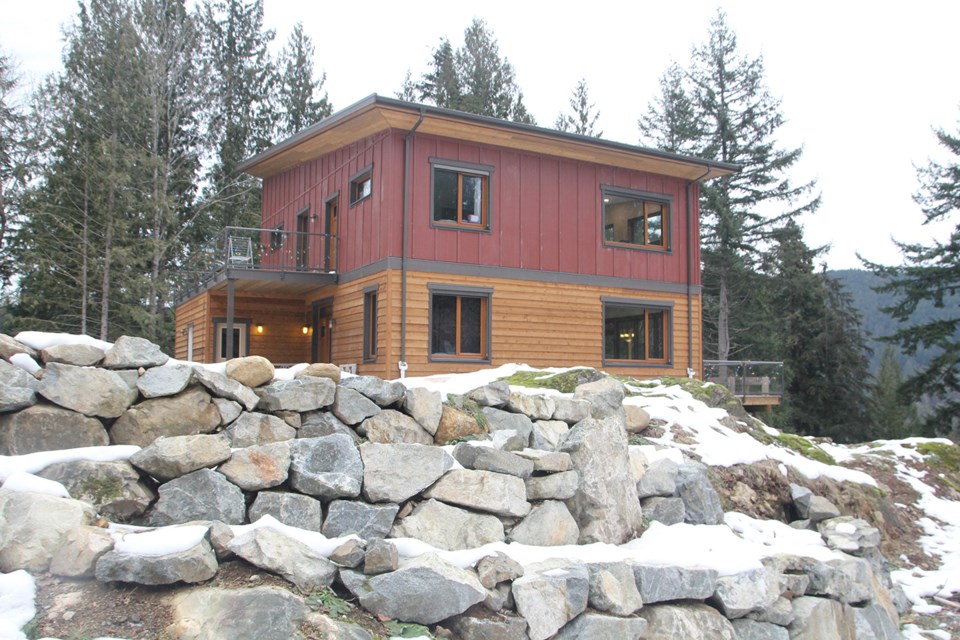 Walking from the icy Bolton Road driveway to the newly built home belonging to Andrew Brownsword, Andrea Stevenson and their daughter Maryanne, you will pass by a rustic little cabin that served as the family’s home while the new place was under construction. The two buildings couldn’t be more opposite, and the cabin serves to highlight what makes the new house quite remarkable.

“It is roughly 700 square feet and extremely drafty,” says Brownsword about the cabin. “Last winter, we had three space heaters and a wood stove going at any given time. I recall one heating bill that was roughly $700, and another that was more than $800. It was a pretty warm winter, and we were still cold.”

The new home, which they moved into in May, is roughly 2,400 square feet. It is spacious, open, and comfortably warm on a cold winter’s day. At the moment, there is one space heater running in the house as the heat pump is not fully operational.

“This winter we’ve had hydro bills of close to $400, which is really a lot for this place,” says Brownsword. “Once the heat pump is functioning as it should, we should be seeing bills that are much closer to $400 per year.”

“We haven’t tried it, but they say that in a house like this all you should be able to light half a dozen candles to keep it warm,” says Brownsword. “Here’s another way of looking at it: the smallest propane fireplace you can buy will put out between 25,000 and 30,000 BTUs (British Thermal Units). This is roughly the same as a woodstove. Our entire house over the past month has only required about 9000 BTUs, so while we do have a space mapped out for a woodstove, a regular wood burner would instantly overheat us. Our plan is for a masonry heater, which captures most of the heat in stone and releases it over 24 hours.”

Brownsword, who is a software engineer with Oracle, says he’s been interested in energy efficiency ever since he did a project on it in grade 12 social studies.

“We knew we wanted to stay on Bowen so we started looking around, but the existing inventory here struck us as highly inefficient,” he says. “An architect we were talking to told me to look up Passive House, so I did and the rest is history.”

He points to the large south-facing window in their living room as an example of what makes this style of construction different.

When asked about the cost of this kind of construction, in comparison to conventional construction, Brownsword says that when it comes to this home in particular it is hard to pin down accurately.

“The lowest estimates I’ve seen say it inflates your construction costs by about 10 percent. For us, it was probably a bit more because there aren’t a lot of passive houses around here – so, for example, we had to get these windows from Europe - they’re from Ireland,” says Brownsword. “And of course, there’s more material – more wood and more insulation. But what you get is a huge savings in energy costs, and we know that energy prices are only going up.”

Brownsword says that in the two to three years prior to construction, they interviewed 16 builders. In the end, they settled on Brad Carter as the lead carpenter and Eric Blomberg as the general contractor.

“Some of the guys we talked to said just show me the plans and I’ll build it, we knew this attitude wouldn’t work for us. Finding someone who was excited about the plans was key,” says Brownsword. “There was a really dedicated team here, it was important to have people on board with the rules – like don’t put nails through the airtight membrane of the walls.”

Brownsword says there is more work to be done on their house, beyond getting the heat-pump fully operational. Eventually, he says they want to get solar panels on the roof, and a rainwater catchment system in place.

“I’ve been fascinated by the subject of energy efficiency for a long time,” he says. “And now that we’ve done it, we really love it. I have so much in my head and I would love to help people out with their projects. In Vancouver, construction standards are being aggressively improved, and building the old-style of house just didn’t make sense to us. Hopefully people will see this house and follow the example. So far, it’s been great to live in.”

The BC Building Act and energy efficiency

In the earlier article about Bowen Island’s Community Energy Efficiency Plan (CEEP), councillor Maureen Nicholson mentioned the BC Building Act as an example of how higher levels of government can help municipalities cut emissions.

In the plan (the CEEP), it is stated that emissions from buildings accounts for 13% of all of Bowen’s emissions. The plan states that, “the energy efficiency requirements of the BC Building Code may not be reflected in some buildings due to a lack of knowledge by builders, and limited number of required inspection or enforcement practices.”

Possible solutions to this, as stated in the report, include:

Promoting educational sessions on the BC Building Code to builders / developers in their community. The Homeowner’s Protection Office regularly runs such sessions.

The report also mentions that the building code is an ongoing provincial initiative, improving energy efficiency of new housing.

To understand the role that the BC Building Act plays in efficiency, The Undercurrent spoke with Bowen-based architect Martin Pykalo, who works for the City of Vancouver to deliver city-owned assets such as libraries and public housing.

“The Provincial Building Code is the law, and it applies to all buildings no matter how small. Even a shed, if it is heated, must adhere to the standards set out in the Building Code,” says Pykalo. “It outlines the worst possible building you can build, and it is the Municipality’s job to uphold that. In order to get an occupancy permit, the building must meet that basic standard. If you happen to own a building that is not to code and are paying for insurance, you are basically throwing your money away because if you have a fire, it gives the insurance company an excuse not to pay you.”

He adds that some municipalities have enacted mechanisms that force developers to adhere to higher standards. The City of Vancouver, for example, has required that any building built for its ownership must adhere to LEED Gold Standards (this is one of the highest standards for efficiency set by the US Green Building Council.)

“Implementing a mechanism like this requires a lot of political will,” says Pykalo. “And in a time when we are addressing the issue of affordability, building costs go up. I do think in the long run, when you factor in energy savings the costs balance out.”

The province of British Columbia has committed to implementing an “Energy Step Code” into the Building Act to replace the unique requirements that municipalities across the province have implemented. According to a report by the Office of Housing and Construction Standards, the levels of the code indicate “a linear progression from the current Building Code towards the highest levels of energy efficiency in buildings.”

Signing on to any increased standards laid out by this code would be voluntary. The Step Code plan is expected to come into force in this spring.