A delicious lesson in chocolate

Much the same as wine regions, a cocoa bean’s origins evoke a particular taste relating to the land
May 20, 2016 9:46 AM By: Louise Loik 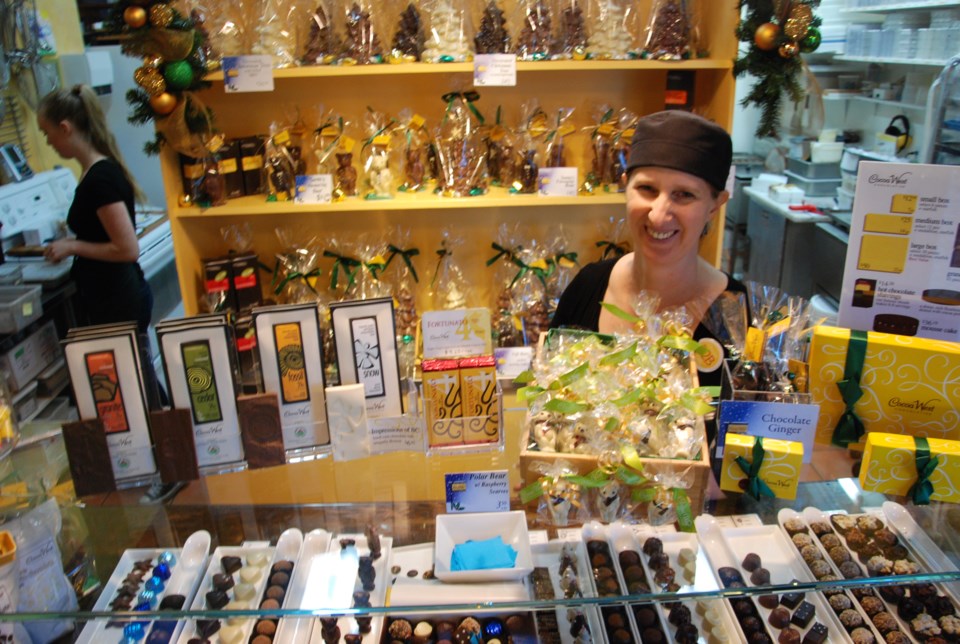 Sixteen pairs of eyes stare as the five chocolate wafers are laid out on a dish on the table below. The eyes are unblinking, belonging to the white, milk, and dark chocolate teddy bears lining a shelf. The bears are safe, for the moment.

Artisanal chocolatier, Joanne Mogridge is demonstrating the proper steps for a chocolate tasting. “Start with the darkest one, break off a piece and listen for the snap.“

She leads by example, breaking off a piece of shiny dark chocolate from a square, closing her eyes and inhaling the scent of the chocolate as she raises it to her mouth.

“Now, breathe in the scent through your mouth, then chew it into little pieces spreading the chocolate over your palate.” By paying attention to the flavour in this way, hints of everything from citrus to smoke or fruit come through in a subtle way that is discernible, even to a novice taster.

Mogridge, who opened the doors of Cocoa West with her husband Carlos Vela-Martinez 13 years ago, explains how the soil conditions where the cocoa is grown, affect the flavour of the cocoa bean. “Hawaiian beans have an ashy taste from the volcanic soil, cacao from Madagascar has more of a red fruit, or red berry flavour. Venezuela and Madagascar are renowned for producing the finest cocoa in the world.

Cocoa West chooses the highest quality organic chocolate that has a blend of origins for a balanced flavour that will work with anything. “An acidic cacao isn’t good with coffee and a fruity Madagascar cacao wouldn’t work with lemon.“

Mogridge says that her husband has exceptional ability to distinguish subtleties of flavour that others miss. As chocolatiers, they choose the chocolate they want for their products from a chocolate maker who buys the cacao beans and processes the beans to render chocolate.

“Big companies will blend the cheapest beans with lots of sugar, oil and wax to make candy bars. “ An artisanal chocolatier, on the other hand strives to perfect every part of the chocolate eating experience from scent, to “mouth feel,” to taste, texture, how it melts, to how it sounds when you bite it, and how it looks with regard to sheen and design.

“When I set out to learn about being a chocolatier there wasn’t anywhere to go,” Mogridge says. People didn’t want to share their trade secrets or culinary schools offered chocolate making as part of an entire confectionary and deserts curriculum. She was able to get the Vancouver culinary school to break out the chocolate making part of their course for her telling her they could teach her to be a chocolatier in 10 hours. “I’ve been at this for 13 years and I’m still learning,” she says.

Mogridge says she is still grateful that she had a chance to work at Rocky Mountain Factory and Chocolate Arts when she was looking for training.

“Greg Hook at Chocolate Arts knew I wanted to learn so I could go off and do it myself and he was so kind.“ Rocky Mountain taught her about the financial side of running a business. “It was totally invaluable.” She went on to BCIT for the Entrepreneur Venture program. The business plan she wrote was the only one in her school group that got financing. She says that in succeeding as a chocolatier, “the chocolate skills and technique make up 20 to 25 per cent of the picture. The rest is about business skills.”

Mogridge says that leading up to Christmas, she is working 14 hours a day. ”The balance in my life comes and goes,” says the busy woman. She will take product to a Craft fair in Vancouver over the weekend and then come back make products for her regular market and work on growing her corporate sales. “We put together fantastic corporate gifts and can deliver it to town, but I don’t think people here realize we offer corporate gifts.” The couple also runs a bed and breakfast next door to their shop called “The Chocolate Suite.”

Working hard is nothing new for the chocolatiers. When the company was starting out, Joanne and Carlos were simultaneously starting their family. “We were preparing for the Easter rush,” Joanne says “I was working 100 hours a week until I went into labour just two weeks before Easter.”

After giving birth to a daughter and resting at the hospital a few days, Joanne and Carlos came back to the island with their baby and hit the ground running. The couple worked feverishly as helpers came and held the baby for the new parents as they poured chocolate and measured ingredients. Mogridge, now the mother of a teenager, looks back at that crazy month with a shade of disbelief. “I’m still learning to work smarter, not harder.”

As Mogridge continues to learn, she also gives others interested in the business a chance to be mentored at Cocoa West. Taking six students at a time, the shop at Artisan Square hosts up to 24 students per year. ”They come from all over the world: China, Dubai, Ecuador, Chile, South Africa.” She says she makes sure that there’s more that goes into being a chocolatier than making chocolate bonbons. “I want them to know that they need a good business plan.”

When Mogridge wrote her business plan and was asked to point out where artisanal chocolate was along the industry bell curve of growth, “I put us at the bottom of the end of the curve.” She thought small batch, gourmet chocolate, had already peaked and ebbed in terms of market growth but still thought she could develop her market. “It turned out we were ahead of the trend,” she says with happy hindsight.

Mogridge says that in the years Cocoa West has been on Bowen, the customers have become educated in the delights of dark chocolate. She says that chocolate flavour is like wine flavours. One type of wine, like a chardonnay, tastes different from one winery to the next. The sensuous qualities of chocolate vary based on the origin of the beans, the roaster and the chocolatier. Now customers can choose from approximately two-dozen flavours of chocolate truffles, some with seasonal, and locally grown berry and fruit fillings. The chocolates are fresh and organic and with dairy instead of oils so they have a limited shelf life. But that wouldn’t seem to be a problem as a steady stream of customers buys chocolate-based hot drinks to go along with one small chocolate that never gets past the bright blue door to the outside world.

She snaps another square of chocolate, “Life is too short to not eat great chocolate.” She closes her eyes and sinks into the sensorial experience of dark chocolate delight as her assistant hands a white chocolate bear over to the next customer.