The Pacific Spiny Lumpsucker, Eumicrotremus orbis, is one of twenty-seven species of the scorpionfish family Cyclopteridae (cyclos = circle; pteryx = wing).
May 9, 2014 11:11 AM By: Denis Lynn 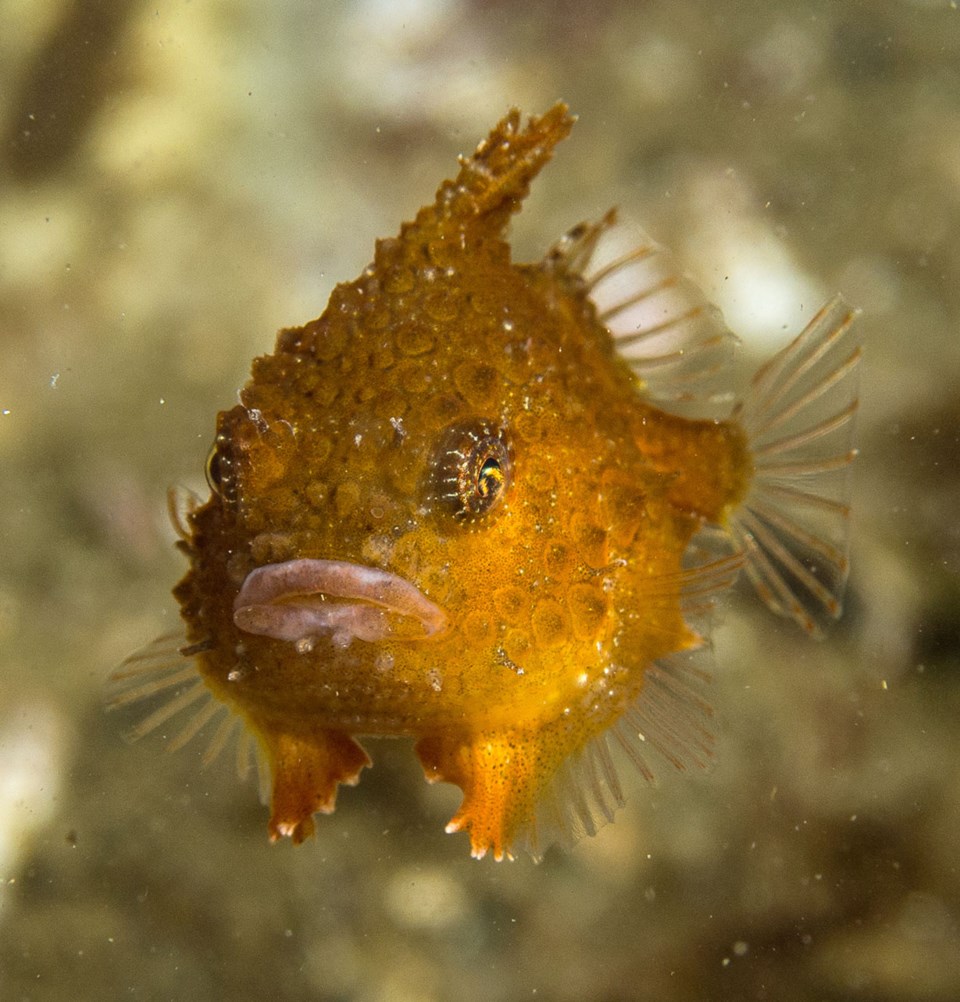 This cute little Lumpsucker was the size of a quarter, and photographed at King Edward Bay, Pacific Spiny Lumpsucker. They grow to be the size of ping-pong or golf balls and can be found in Eelgrass and kelp beds as well as occasionally on rocky walls.Adam Taylor

The Pacific Spiny Lumpsucker, Eumicrotremus orbis, is one of twenty-seven species of the scorpionfish family Cyclopteridae (cyclos = circle; pteryx = wing). Lumpsuckers are so named because the bones of the pelvis and rays of the pelvic fins/wings develop into a circular sucker on the belly and this sucker creates a negative pressure in the cup, allowing the fish to attach themselves to seaweeds and rocks. This is especially important for larval fish, which might easily be swept away by currents. The name “lumpfish” refers to the shape of these fishes, which is typically rounded, fleshy, and often with tubercles and small spines covering the body.
In the Pacific, the Spiny Lumpsucker is found as far east as Japan and as far south as Puget Sound. It rarely exceeds 13 cm in length and 100g as a maximum weight. Even though small, they are quite curious, often entertaining divers with their antics. They feed on worms, small crustaceans, and molluscs. In their turn, they make a nice dinner for Pacific cod and sablefish.
I first discovered lumpfish on the east coast of Canada when I was exploring the intertidal zone on a very low tide. There I found many small, lumpy larvae of the Common Lumpsucker, Cyclopterus lumpus, attached to seaweeds. The Common Lumpsucker is a bigger fish – reaching 60 cm in length and up to 9.5 kg. This species can migrate sometimes hundreds of kilometres to spawning grounds where the females lay 100,000-350,000 eggs in a nest guarded by the male. Their high fecundity makes Common Lumpsuckers an attractive source of inexpensive caviar, especially sought after in Scandinavian cuisine.
On a recent trip to Norway, I visited my marine biologist colleague, Torbjørn Dale, in Sogndal. In his aquaculture facility, they were raising Common Lumpsuckers, both for their roe and for sale to salmon farmers. Recent research by Imsland and collaborators has revealed that lumpsuckers feed upon salmon lice, perhaps making them a sustainable and safe method of protecting farmed salmon from these these pesky parasites.