I rarely travel for vacations, but this summer en-route for a training session near Dusseldorf, I threw myself into the wonders and travails of travel by deciding to stop off in Amsterdam each way.
Aug 14, 2017 4:22 PM By: Kami Kanetsuka 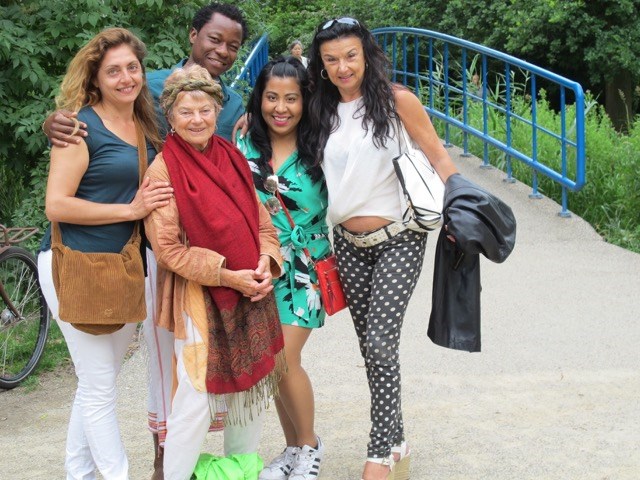 I rarely travel for vacations, but this summer en-route for a training session near Dusseldorf, I threw myself into the wonders and travails of travel by deciding to stop off in Amsterdam each way. Through great serendipity I was able to stay with a wonderful Dutch family, who had been expecting a Japanese visitor.  It has been a long time since I met such a model family, young parents with two teenagers, a daughter of fifteen and a son of thirteen. All were great hosts who all spoke perfect English and lived in a large apartment a short tram ride from the centre of town but near a colourful street market, where one could get anything.

During the day I was on my own to take in all the charms of Amsterdam newly experiencing hot summer weather. Everyone was out on the streets, cycling or sitting outside their canal facing apartments drinking wine and beer. On the central narrow streets young men and women were hanging outside coffee shops rolling cannabis joints -- reminiscent of Kathmandu as I knew it in the sixties.

I found out that the Netherlands is the most populated country in the world and so it is not surprising that Amsterdam seemed very overcrowded. Over the years there have been many waves of people arriving, some from countries colonized by the Netherlands and now escaping war situations.

I spent much time walking and getting lost, visiting Ann Frank’s house, where people lined in the hundreds to get in and another house in Haarlam where a devout Christian family hid forty-seven jews in the wall at night all standing up.  They were on the underground route to Antwerp. I was allowed to crawl in backwards on my hands and knees to experience this. Somehow it brought back memories of my days sleeping in air raid shelters in London -- it was all connected to the same war. After three days alone, of exploring museums and watching people and boats cruising on the canals, some with noisy party goers, I was off to take my course with sixty people near Dusseldorf, Germany

In a retreat centre with a garden that contained Nepalese and Tibetan monuments, I recalled all the years I lived in Kathmandu and had a strong sense of being brought there for a purpose. I felt so at home in the wonderful garden of Pauenhof Retreat Centre.  Here to do inner and outer work, we were training to be Mindfulness teachers.  After my fellow participants left I stayed on for a personal retreat to explore the gift of solitude. Strangely, this heritage house also hid Jews passing through with the help of the farm family who owned it then. After a few days I took the train back to Amsterdam. Unfortunately my host family was away for the return part of my trip.

Here is where how not to travel kicks in. One should never arrive in Amsterdam in summer season without making hotel reservations. I made the mistake of not arranging accommodation for my final weekend there. An experienced traveler, I failed to realize that on a weekend in full tourist season, all accommodation is booked unless one wants to pay around two hundred euros a night for a room, a little way out of Amsterdam. When I arrived at the tourist information in Amsterdam the only place they could suggest was a hostel in a crowded touristy part of town.  At the Uptown Hostel I found I could have a bed in a room for six. I was the first to get a bed at the ridiculous price of almost one hundred dollars Canadian. I was the first in the room but the receptionist assured me it would be full at the end of the night. It was definitely the party area, with nightclubs, restaurants and cannabis smoking coffee shops.  When I returned I could see the room would be full. At 4am, five young Belgian women arrived after partying, either inebriated or stoned, or possibly both, and they laughed and made a big noise until I asked could they please go to bed. I did not get much sleep that night.

At check-out, when the receptionist asked whether I wanted to stay another night, I felt reluctant. I was told that as it was Saturday night the price would go up.  I told them that after my sleepless night I found that outrageous.  The men who had been kind to me all along discussed something in their language, which was not Dutch. One, who I believe was the manager, said “We are Muslims and we respect elders, please stay tonight on us.” The memory of their kindness remains with me.

On my final afternoon in Amsterdam I connected with a wonderful group of like-minded people listening to music in Vondelpark. After all the intense happenings of the past few weeks, I departed from Amsterdam on a happy note.