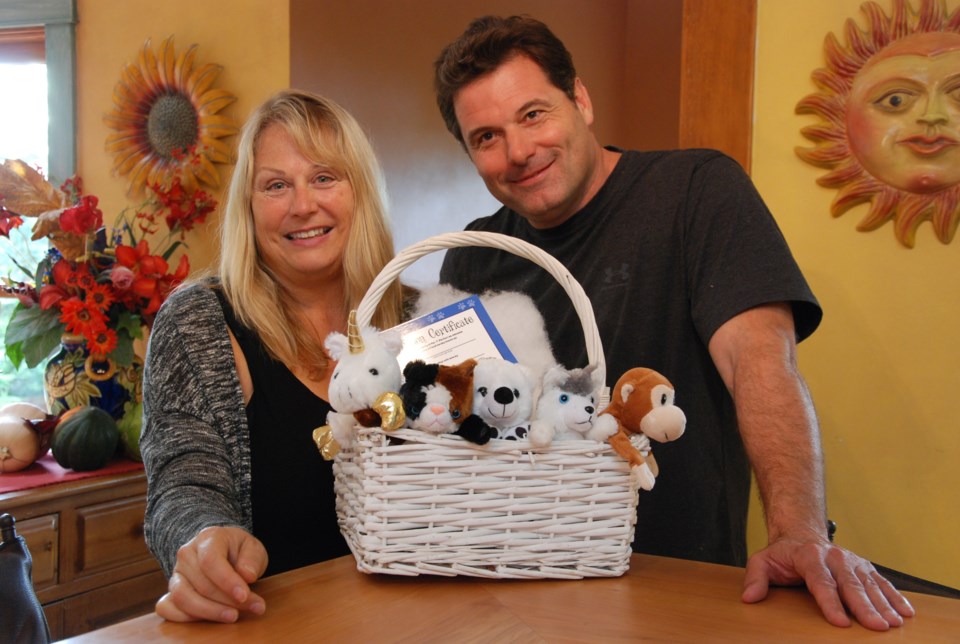 Jim Gibson is wearing shinyblack plastic pants adorned with a devilish tail s Michelle is wearing cowboy boots and a cowboy hat. They’ve got a bunch of little stuffed animals and are having fun goofing around with Halloween props. Setting up a photo shoot with Jim and Michelle Gibson, you have to know that their take on “business casual” is very different than for most of us.

Jim and Michelle are in the business of fun. As owners of Par-T-Perfect Party Planners Inc. the Gibson’s work really is all fun and games. Par-T-Perfect is a full-service party planning and staging company with franchises across Canada.

Michelle started party planning in ’88 with little more than enthusiasm and ideas but almost nothing in the way of party supplies. “Until someone booked it, I didn’t own it. I’d get a booking and then I’d run off to the store and get the supplies.

Gibson decided she wanted to take party staging to the next level so she ordered a Bouncy Castle from England. “I had one of the first Bouncy Castles in North America. I’d pitch the idea to people but they had no idea what I was talking about.”

Michelle’s Bouncy Castle arrived from England around the same time as her bouncing baby boy. Unstoppable, Michelle kept looking for orders. She says the “first time I set it up in a mall, a kid jumped onto it from the floor above and we didn’t have insurance.” She laughs about it now. “You fly by the seat of your pants at first and then you evolve.” Little did she know that 28-years later, the business would take flight and win Canada’s top award of Excellence for an Established non-Traditional Franchise.

Jim is justifiably proud of the achievement, which follows on a Bronze win last year.

The award from the Canadian Franchise Association recognizes Jim and Michelle’s solid support for their franchisees. “the awards recognize excellence in franchise operations, superior franchisee relations, leadership, business planning, marketing, training and support, ongoing operations and communications as voted upon by the franchisees. All together, the franchises stage “thousands upon thousands of events a year.”

“We have a complete library with support materials for our franchisees. “ says Michelle. Once a week we have a video chat, there are video conferences where the businesses from across the country can connect with ideas and discussions.

Michelle and Jim bring their franchisees together annually for a day of activities, ideas and fun. “They aren’t running a business on their own. They’re part of a team and that’s the great part. They are part of a team.” Jim will tell you that on average one in five businesses survive on their own beyond five years but that “80 per cent of franchisees succeed.” Michelle adds “that’s because we went out there first, made mistakes, got things figured out.”

Michelle looks back and says it took months when she was starting out, trying to promote the idea of a bouncy castle. Business took off once she went on the Rafe Mair show to talk about her business. “The phone started ringing and didn’t stop.” She got calls for birthday parties that needed everything from decorating to activity leaders to Bouncy Castles and gift bags. She was staging 100 parties a week. Customers ranged from family birthday parties to large corporate events. Jim had been working in the franchise business so he joined Michelle for a perfect partnership. They began to sell Par-T-Perfect Franchises.

Three months ago Par-T-Perfect Michelle expanded the types of supplies she could offer. As the idea of the bouncy castles took off she designed one that looked like a giant Dalmatian then added a custom-made inflatable gingerbread house that is under 8 ‘ tall for indoor events. Now they have “a Foam Pit. – You pump the foam in and then hide things in it for a treasure hunt and you can make foam hats . We have some off the dial stuff.” She adds.

added an on-line store for party supplies for “do-it-yourself party staging. “ Not everyone can afford a fully staged party,” says Jim. With Party Pets, a box that includes 10 un-stuffed 8” ready for stuffing with little wishing stars to put inside them. There are little kits for sparkly stencil tattoos, and-shirts to paint . You can order a box with all the products or select a smaller kit.

So far, par-t-pets has four animals, including a unicorn, monkey, dog, and cat and a polar bear is on its way. That the company has all the pets made under their private label. The T-shirts were just added to the line last week. “We will keep expanding our private label so that we may get 20 animals. We will offer unique top quality supplies. They’ve done test runs on their par-t-pets with Bowen kids as well as beyond Bowen. “It’s funny, Bowen kids like the dogs and cats best. Other places like unicorns and monkeys.”

Michelle and Jim see other differences in their market. “With party planning, someone on Bowen will go out to their garden, look around, get some inspiration, and make it happen. “ In town life is so rushed, people are more inclined to use planners. “We fill a niche in town and we sell kits to remote communities.”

The next step in 2016 will be “mini-franchises.” People living in small towns with a smaller market will be able to run a franchise with a smaller star-up investment of $5000. and run it as a part-time business. “Owners would be able to build on the business as they grow. We’ll be looking for creative to offer a mini-franchise” but Jim says they are still working out the details for this part of the business.

While Michelle and Jim have had the opportunity to move to town, Bowen is where they want to live. “We were able to come to Bowen because we don’t need bricks and mortar for the business. A lot of entrepreneurs today don’t have to be in a major city. We love it here. It’s perfect...