Bowen Island is the only community in Canada where a member of the public can check-out a thermal imaging camera from the local library.
Mar 23, 2017 3:29 PM By: Meribeth Deen 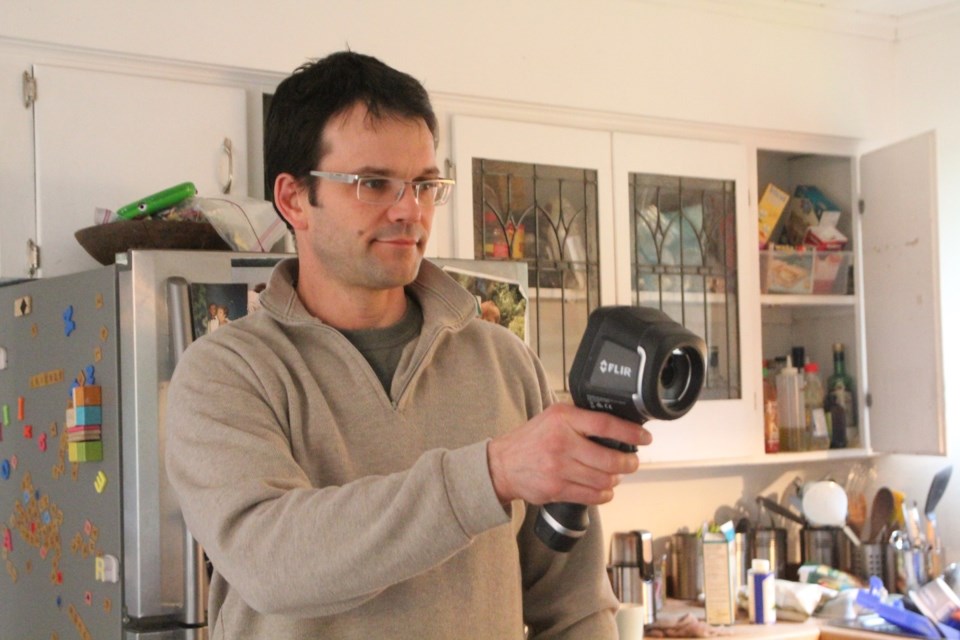 Bowen Island is the only community in Canada where a member of the public can check-out a thermal imaging camera from the local library.

The Bowen Island Public Library has two of these cameras, purchased with carbon tax money returned to the municipality after reporting community actions to reduce emissions to the province’s Community Action Revenue Incentive Program. With these cameras, volunteers with Cool North Shore and Bowen in Transition have surveyed local homes for the past two winters, offering tips on how to reduce heating costs and increase energy efficiency.

Last winter, volunteers from Cool North Shore conducted what they call “mini-energy audits,” and offered training on their community approach to sustainability. Rod Marsh gravitated towards the technical aspects of the work, learning to use the camera and conduct the audits himself. Other members of Bowen in Transition took over organizational aspects of the program.

“Like Cool North Shore, we tried to take a neighbourhood approach and the first neighbourhood we tackled this year was Whitesails. We audited five houses there in one day,” says Marsh. “Aaron Davison invited people to a potluck following his audit. People chatted over lunch about their experience, and the hope is they will continue that conversation as they make improvements to their homes.”

The camera, Marsh explains, not only measures temperatures on the various surfaces in a room but also takes a picture describing the heat or lack of it.

“It will show you the temperature of a wall, or of a window, but it will also show you where the cold patches are – maybe indicating a lack of insulation – or where there’s poor caulking or draft sealing,” says Marsh. “If you see a hot patch, that might mean there’s an overheated electrical wire.”

“People often think that if they are losing heat through their windows its because the windows aren’t sealed properly and are drafty,” says Marsh. “In fact, if you are sitting or standing near a window your body will lose heat to that window, in the same way your body will gain heat if you are standing with your back to a fire. Radiant heat, the heat that makes the biggest impact on our comfort, throws heat at any surface in the line of sight. So your body will throw its radiant heat at the cold window. This is why one of the most simple heating solutions is to put some kind of window covering on to block that negative transfer.”

Marsh says that while most Bowen Islanders enjoy radiant heat emitted from wood-burning stoves, many islanders could benefit from attaching a fresh-air vent to their stoves.

“If you have your wood stove burning in the main room of your house, you’ll likely notice that the other rooms are extra cold,” says Marsh. “This is because the stove is sucking the air from those rooms to fuel the fire, and cold air from the outside is then being sucked in to those rooms. An outside-air vent connected to the stove’s draft will stop this from happening.”

Marsh says that any room where the temperature falls under 13C is at risk of developing mold and mildew growth.

“For rooms that are not in constant use, a dehumidifyer is a great solution,” says Marsh. “It sucks the moisture out of the air and also emits a small amount of heat. Yet the energy it uses is significantly less than that of a heater.”

This year, Marsh and members of Bowen in Transition audited 30 homes. On April 2nd, they will be hosting a follow-up potluck to discuss the audit outcomes and next steps.

“We’re looking forward to finding out how people have responded to our recommendations,” says Marsh. “Based on the enthusiasm of the people we worked with, I am thinking we’ll be hearing about lots of follow-through.”