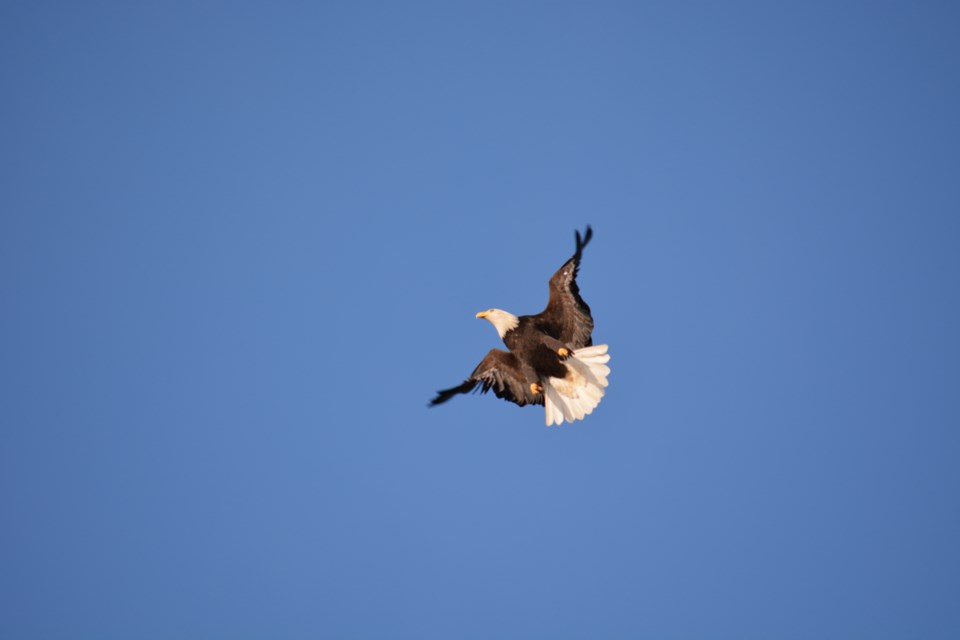 At this time of year, the eagles and humans who want to see them, traditionally flock to Brackendale for a feast on spawning salmon. This year, with frozen rivers and fewer fish, the eagles haven’t landed.

The average eagle count in Brackendale is 1442, this year there was 1000 fewer birds, the lowest in 30 years or more. The highest was closer to 4000, in ’94. While there is concern that Eagle numbers may be dropping, there have been an increased number of sights elsewhere.

On Bowen, people have seen as many as 15 bald eagles riding a thermal over the southwest tip of the island, and many more have been spotted around the shores.

What may be happening is that the eagles are scattering to various locations where food is more accessible.

Richard Wing, of the Bowen Island Nature Club has seen a significant number of the birds over the southwest side of the island shores but Wing says the data from the bird count on Bowen has not come in yet. In the past, it has been common for around 30 eagles to be sighted.

Eagles and Turkey Vultures are frequently seen together soaring over Bowen, riding the thermals above rock ridges. Both types of birds are similar in size, but the wing shape of the eagles is more tapered when seen in silhouette against the sky. The juvenile eagles lack the white heads and tails of the adults and are more likely to be mistaken for a vulture at a distance.

The wings of a bald eagle span 8’, or nearly 2.5 m across. One powerful flap carries them a great distance. On Bowen I have watched the eagles during mating season somersaulting as if from a cloud, tumbling with talons locked together. They once landed in a bush when they didn’t release claws in time, and another time, they tumbled earthward oblivious to the van that would break their fall. The birds broke their hold on each other just in time, splitting off just above the roof of the van, a flight feather falling to my feet.

Eagles, like owls, can spin their heads to look for prey, and may be able to see prey from a distance of 5 miles, and through water. If an eagle gazes at you, you can sense what it must be like to be prey with a predator assessing your ingestibility. Eagles can spot their prey from five miles away and through water. When they look at you with their yellow eyes, it feels nothing like the gaze of a Canada goose.

Last summer, my daughter and I were out swimming a fair distance from shore by Tunstall Bay when an eagle appeared in a flash, wings and talons outstretched, he skimmed in just over her head, and just in time for me to shout for her to turn, he dropped his talons into a fish that was swimming below the surface between us. In a rush of huge wings, the bird picked up the fish from between us, and was gone. We had not seen the fish in the water at all.

I have seen a black lab cower and hide from the golden gaze of eagles. A park ranger on Vancouver Island told me that she had to deal with someone whose dog was taken by an eagle. An eagle isn’t likely to eat a dog but they can pick up fish that weigh up to 15 lbs or nearly 7 kilograms.  Once the talons are in the fish, it is hard for the talons to release. The birds usually take their food to shore where they can use the ground to push away from the food and release their claws. If they catch a heavy fish in deep water the bird may be able to row in a butterfly kind of stoke to get to shore. If the bird can’t release the fish, both will drown.

During salmon spawning season, the eagles are more likely to scavenge dead and dying fish from the edges of a river. On Bowen, one man was known for illegally feeding the eagles pieces of fish he would toss into the sky for the birds. In most cases, eagles stop eating if people approach to within 150 m. Usually an eagle will roost up to 5 km from where they feed.

When the fish are done spawning and eagles have to work harder for a meal, they will take the young from other large bird’s nests. In Snug Cove, we used to see epic battles waged between attacking eagles and the heron parents desperate to protect their young. The outcome was never pretty.

Bald eagles have always had their favourite snags to sit on and scope out the land and sea for food around the island. The trees strong enough to hold the massive nests are hard to find, but the birds are still here. The trees along the water’s edge have been a traditional resting place for eagles. While their bodies blend in with the bark, their white heads are a give-away as to their presence; their heads and the sound of their seagull-like shriek.

By February, the eagle numbers will dwindle, but you can still see the bald eagles year round on Bowen, usually close to the water.