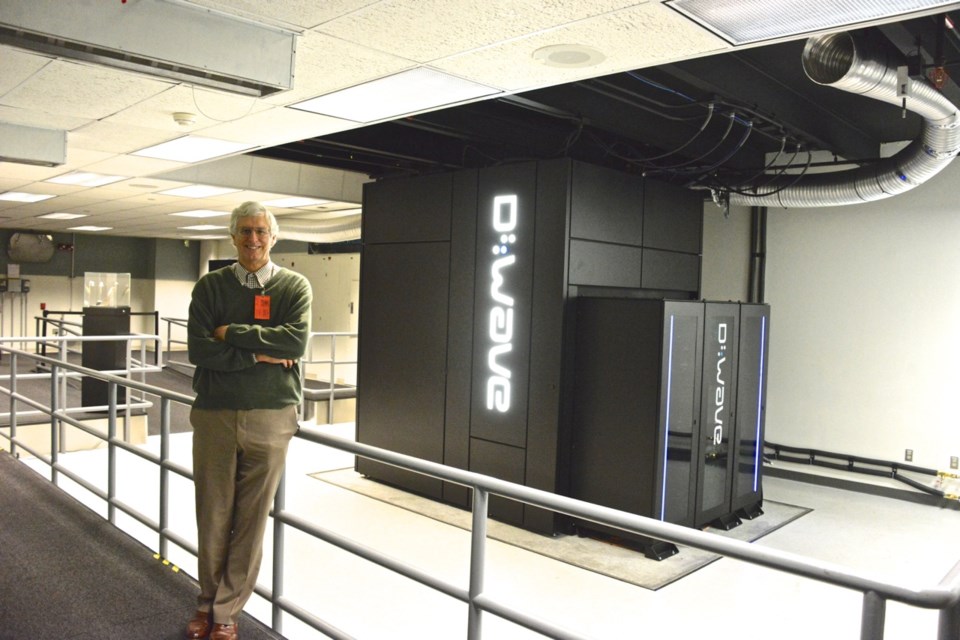 Haig Farris, co-founder of the world’s first commercial quantum computer, DWave, thinks it’s great that the Prime Minister is bringing quantum theory into the mainstream, but according to Farris, who lives on Bowen Island, “they say that if you say you understand quantum mechanics, -you don’t.”

Farris, who co-founded D-Wave in 1999, has his own explanation of how a quantum computer works. ”It processes every possible permutation at once. Classical computers take things step by step. In a problem that is extra complex, like chess, or with stock trading there are a great number of possibilities. It solves the whole problem in one step.“

“With quantum computing an algorithm incorporates all that information, entangled and superimposed. It produces solutions in one computation.”

“We are working on 2000 permutations solved in the blink of an eye,” says Farris. “No one is doing it yet.”

The company website describes DWave as a computer that “taps directly into the fundamental fabric of reality – the strange and counterintuitive world of quantum mechanics.”  Einstein described the idea of quantum physics as “spooky distance;” a place of parallel worlds, or as our PM explained it, where things can be “both a particle and a wave at the same time.”

“We’ve done the work,” says Farris, “You can prove it on an atomic level. Particles can exist in two places at once.”

What is even stranger than the concept of quantum mechanics, is that what happens inside the box of a DWave computer. The equilibrium of the computer is maintained within a super-cooled environment, 150 times colder than interstellar space.The balance is so delicate that what happens in the box is unobservable, as observation, heat, or noise would mess with the homeostasis.

Another advantage of quantum computers is that DWave “is green technology.” Says Farris. “It can have a huge positive impact on the environment; One huge DWave server can form millions of computations, but It doesn’t generate heat, and scaling up doesn’t use more information. Currently, what one quantum computer can process in a moment would take a million traditional, computers, to process over the course of many years.”

The human-like ability to assimilate a lot of information in an instant is what is special about the DWave computers.  For instance, says Farris, “With Google Glass, our computer taught it to distinguish between a wink and a blink.”

The possibilities for problem solving with this technology are vast are unimaginable, and for Haig Farris, this kind of business is a perfect fit. He is a man who dwells in the realm of possibilities.  Though he isn’t one to blow his own horn, Farris has been pushing the boundaries of what can and can’t be done in areas ranging from the arts to science and education for decades.

Farris is one of Canada's best-known venture capitalists and experts in high-technology start-ups.  He started out practicing law in Vancouver, and true to form, chose corporate law “because it deals with the future.”  At 28, while working in corporate law, he saw the opportunity for a shift, to work as a financial consultant for start-ups and in venture capital with Ventures West where he helpt to launch numerous high tech start-ups. As his accomplishments grew, so did Ventures West. “It got big and I left,” says Farris. Years after he left Ventures West, he initiated the financing of Datum Telegraphic that was founded by Dr.Andy Wright, who is also a Bowen resident, and now a leading environmentalist, and his partner Laurie Wallace.  Datum developed a digital amplifier for cellular base stations.  PMC Sierra bought the company.

In 1990, Farris started up Fractal Capital Corp, a private venture capital company that finances high tech start-ups. The next year, as a venture capitalist, Farris was invited to teach entrepreneurship at UBC. He, accepted the position as an adjunct professor but wanted to ensure the course would be open to science graduate students, along with other students from outside the faculty of business. He wanted someone with a physics PhD to be apply to apply their skills outside of academia, and use their knowledge in a business application.  For a decade, he worked with some of the brightest young minds in Vancouver and kept an eye out for the “superstars” who could be both analytical and good problem solvers.

One of his superstars was Geordie Rose, who was studying for a PhD in theoretical physics. He impressed Farris with his clear presentation about a complex subject, so much so, that when he came back to Farris years later for support on a quantum transistor, Farris handed him a cheque for a computer and printer to get the business that would become DWave started.

Over the years, only a few superstar students got start-up funding from Farris.

Farris was also impressed with Eldad Haber, one of his PhD studens in Geophysics, who is now a prof at UBC.  Haber developed the machine learning technology being used in mineral exploration.  He also backed plant genetics research at Creatus Biosciences where researcher is Dr. Hennie JJ vanVuuren focuses on the microbiologyof genetically engineered yeast for use in wine making. The company is also using yeast in the sustainable commercial production of industrial chemical compounds.

Farris says that what he looks for in a business partner is not just business acumen, but likeability. “From the time I was 40 I decided I will only work with people I like.”

His guiding principle seems to be working. He has found the right people to work with on an astonishing number of successful ventures.  Farris, who “never took a science course, but read a lot,” has none-the-less spent decades promoting scientific experimentation at all levels. It was Haig Farris, with a strong team of partners, who took the concept of a science centre from an inspiration in the mid-seventies to the grand opening of Vancouver’s Science World, by HRH Queen Elizabeth II in 1987. “I toured Prince Phillip around,” adds Farris, saying that all the work to make Science World happen “was a labour of love.” Says Farris, the co-founder of Science World. “At the time, no one had an idea what Science World was.” Farris worked on acquiring the location, along with $22 million in funding. “Rudy North, who lives on Bowen helped out with $40,000,” says Farris.

At the conclusion of Expo, Farris also managed to get the geodesic dome to house Science World. “It took a big fight to get the globe after Expo ended,” he says, but clearly, the results were worth the fight. His eyes shine with pride over the number of students, teachers and visitors who have walked through the doors of Science World, gaining inspiration and knowledge. “It was fun,” he reflects simply.

In spite of all that Farris has accomplished, he is intriguing in his lack of self-importance. He shows curiosity about the people around him and enjoys talking about other people’s accomplishments. Farris is just as interested in the person who has been a volunteer teacher in a developing country, as he is in an entrepreneur, an artist, a performer, or a physicist. He tries adeptly to focus attention on other people before talking about himself.

Farris is happy to talk about another project that deviates from the high tech world. Billy Bishop goes to War, a musical theatre production which enacts a piece of Canadian history about a World I flying ace, made it to the stage in both London and on Broadway in New York, thanks to the efforts of Farris, who brought the various people and pieces together. He also initiated the Disney movie production of Farley Mowat’s book, Never Cry Wolf.

With so many accomplishments under his belt, you might expect Farris to be feeling burnt out. The opposite would be true. Haig Farris reflects instead that his career “has been a lot of fun.”

He has a strong appreciation for art and museums, nature and especially for the love of his life, Mary Farris, who is an accomplished artist. He’s invested in things that he’s found interesting, and has worked with people that he’s liked. In the process, he happens to be helping “create an entirely new technology with the potential to solve some of the world’s most challenging problems.”

Farris’ list of awards is also lengthy, including an award presented by the Governor General of Canada for his role in developing the Canadian venture capital industry havinginvested in more than 100 start-ups and early stage companies.

In spite of his own personal efforts to promote science and the advance of new technology, and regardless of the show of enthusiasm by the Prime Minister for quantum physics, Farris says the reality is that “Canada is still in the dark ages.” He says that China understands the role of new technology and “treats it as something of major importance; the U.S. is beginning to move in that direction, and with Canada --we may as well be in horse and buggies we are so far behind.” It’s a comment consistent with what we’ve heard on Bowen from technology experts ranging from a plasma physicist to a number of renewable energy experts. Haig Farris, has advice for the next generation of innovators. His advice for them? “Learn coding, physics and math. Learn to think and to debate.” Another thing? “Read a lot.”