LOUISE LOIK EDITOR Bowen Island RCMP Const. Chris Coulter and Const. Cory Hendricks have been credited as being pivotal in arrests related to a string of robberies and break-ins on the water and along the shores of Howe Sound.
Jun 2, 2016 10:55 AM By: Louise Loik 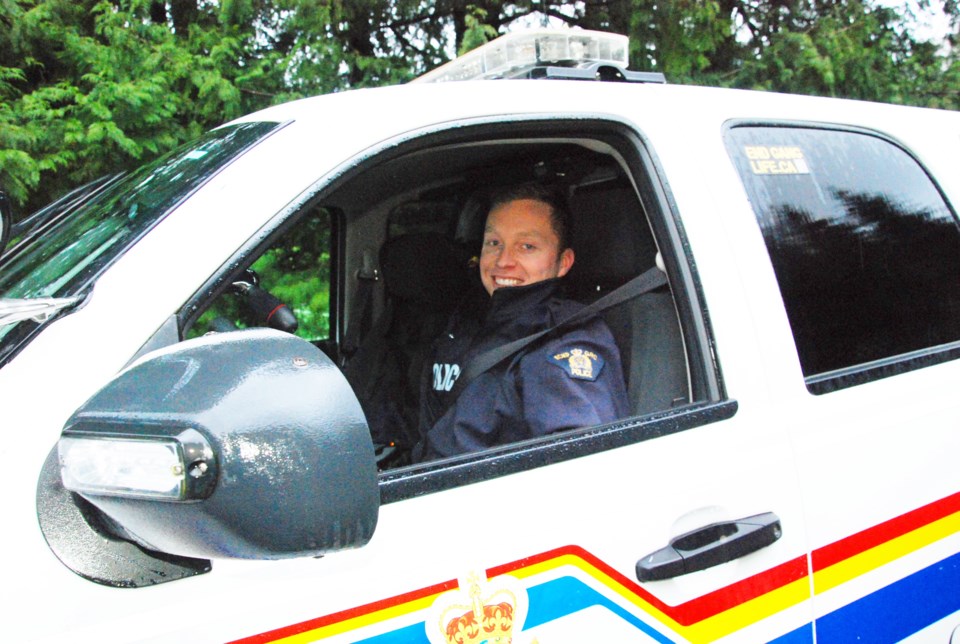 Bowen Island RCMP Const. Chris Coulter and Const. Cory Hendricks have been credited as being pivotal in arrests related to a string of robberies and break-ins on the water and along the shores of Howe Sound.

“Suspects were stealing dinghies from local docks, marinas and associated vessels and using them to target other vessels moored at

ns on the islands of Howe Sound.”

Jeremy Edward Donald Walker, 35, and Liam Eric Fell, 39, are facing a number of charges including possession of a prohibited or restricted firearm and ammunition, break-and-enter and obstructing a peace officer.

“We made the first arrest,” acknowledges Coulter, but due to

technicalities, the judge allowed the suspect to go free.

Between the first and second arrests, another dozen break-ins occurred.

Last July, police began hearing about break-ins to homes and boats around the Greater Vancouver area. By the middle of January, 13 homes and 29 vessels had been broken into, and 21 vessels were stolen.

One suspect slept on a boat overnight and then came back to shore in the morning.

Coulter says his partner Hendricks put a lot of effort into that arrest.

Bowen RCMP detachment has jurisdiction over Boyer and Passage Island.

On Jan. 6, it was Bowen’s turn with a break-in at a shed in Union Bay, just west of Seymour Bay, in Cowan Point. The local detachment collected significant evidence from that site and following leads that took him back to a Vancouver hotel, Coulter executed a search that turned up the stolen goods in a hotel room in Vancouver. The stolen items hadn’t been easy to sell due to the specialized uses of marine equipment or chainsaws from island properties.

Police believe the suspects used stolen dinghies, or tenders, that large boats use to get from offshore moorages to land. They used the dinghies to get to the waterfront vacation properties for a looting spree. Firearms and ammunition were seized, but the staff sergeant says that the suspects have no history of violent offenses.

“They went to unoccupied boats and seasonal residences,” said Coulter.

Most of the stolen goods were still in the hotel room when Coulter got the search warrant.

Police have been able to return most of the property to owners and still have some items like a trumpet, a chainsaw, and binoculars that are waiting to be claimed.

“There were handguns and firearms but they had come from the boats and homes and didn’t belong to the men,” said Coulter.

Coulter said that one of the firearms belonged to a man on Boyer who had forgotten that he’d had it. He told the police the gun was for a deer cull on the island.

“He felt terrible about it getting stolen, and didn’t have any criminal record,” said Coulter.