Rammed earth construction is as old as the hills 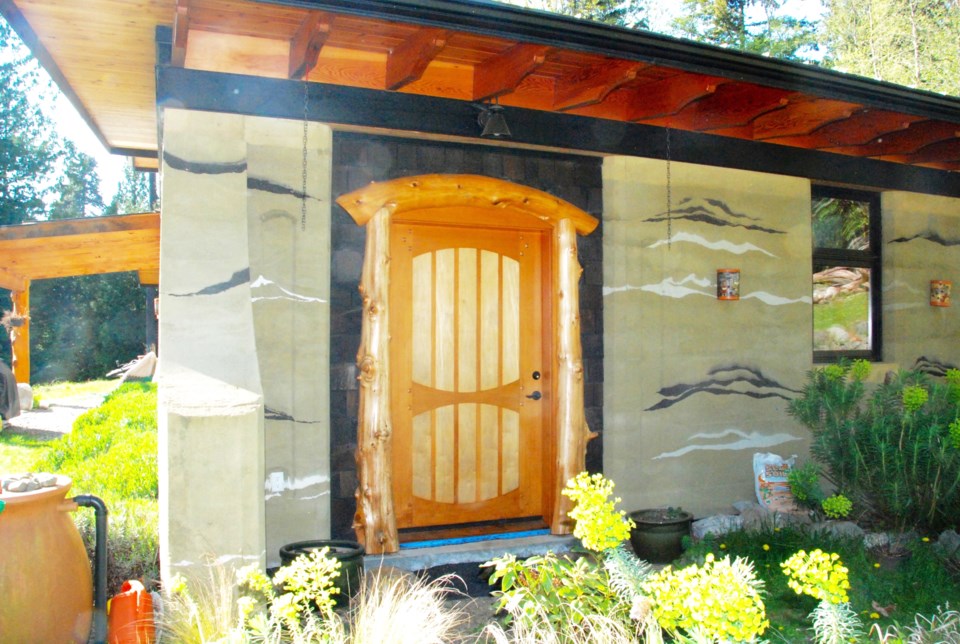 The outside of the house is eye-catching. It features a cedar door, framed with small logs, one of which forms a curve over the top of the door. The warm colour and naturally smooth and knotty texture contrast the black trim that accents the sandstone-like texture of the walls.

The second story, finished in cedar, boasts a roof that curls over the centre of that level, like a quarter of a cylinder that runs from the front to the back of the house. The house looks solid, with a feeling of grounded-ness and of being part of the place. While so many houses are constructed with designs that pay no homage to their location, never looking comfortable in their surroundings, this house has a feeling of belonging.

The Jennings house has risen from the ground, of the ground. It is a rammed earth house; constructed from the rock of the island on which it stands, facing true south, tucked away in a sheltered, southwest part of the island.

Rammed earth construction, while unusual, has been around since the Middle Ages and is used in many places around the world. The technique is likened by homeowner Burns Jennings, to building a sand castle, where damp sand is packed down inside a bucket that is then removed, leaving a self supported sand castle.

Burns, who built the home for his family, says he “had some experience in stick construction,” as he calls wood-frame houses, and noticed that in Canada, unlike Europe, “we build for other people. In Europe, a house stays in the family from one generation to the next. Here, a stick frame house may not even last one generation.” Having a background in environmental studies, and a business in furniture making, Jennings decided to get hands-on with a home that would have permanence, and therefore be more environmentally sound, less toxic, and aesthetically pleasing for his family.  As testimony to its durability, parts of the Great Wall of China were constructed using rammed earth 2000 years ago.

The walls of the rammed earth island home has the look of geologic formations, with natural flow of colour undulating like layers of sedimentary rock, from a layer of grey, through to black and sage green.

Jennings says that Bowen is the hardest place on earth to build a rammed earth house because “it’s pretty much a giant rock.” Jennings says that we live in an area ravaged by glaciers so generally, we have tons of glacial til. “Under one acre of land, you could get enough subsoil to build five houses. In other places, like the valley or across from the Squamish Chief, you build build 5000 homes with the amount of til.”

The rammed earth is specifically subsoil, not topsoil.  Subsoil is clay, sand and silt, and contains nothing that can rot. “We got it from Eddie’s pit, and had it tested by engineers. “ He says. “We put it through screening to prevent larger pieces of stone from getting through. The soil gets mixed with 8% cement, and then we added colours.”

Rammed earth requires a cross-grade of soils, but it’s important to watch for excess clay, which will cause the walls to shrink and crack. Engineers put the soil through pressure tests to assure builders they have the right soil mix.

During construction on site, 15 cm of damp soil was poured into a walls plywood form, one at a time, and compressed with a tamper. “If it was too wet, it would be soupy, if it was too dry, it would be crumbly. We needed to get the moisture just right,” says Jennings.

Builders can dye the layers of rammed earth in a solid, consistent colour, or with a variable striation of colour.  As far as designing the layers of colour, Jennings says, “Being artistic, I just winged it.  I let the process take over a bit. I knew how to affect the look, but didn’t overthink it. “ The main colours on the inside are sage green, white and black, with most of the colour expressed above the windows.

After a section of wall was constructed, the work crew dismantled the form and shifted it to the next section, where they repeated the process.

With a rammed earth house, windows and doors are installed after ramming earth around separate forms that serve as placeholders. Once the earth has cured around the placeholder, the form is removed and the window and doorframes can be installed.

Jennings took a course in rammed earth construction on Saltspring Island, and consulted on the design with local architect Dan Parke of Salal Architecture.

“There are two types of rammed earth houses,” says Jennings, “The traditional style is made of walls with highly compressed earth alone. In an earthquake zone, with a cool climate, you build the walls within forms lined with insulation, and reinforced with steel. The walls are very strong.”

With the design insights from the architect, a vision took shape, of both the overall look of the house, along with an impression of what it would look like, room by room.  For months, along with Burns’ wife Shauna Jennings, the group worked on details down to the location of every light switch and plug. The wiring would follow channels built into the thick walls.

The walls of this home have been built like monoliths; the windowless walls constructed individually, on their own, and prior to the windowed walls. “They are true mass walls that retain heat very efficiently,” says Jennings.  A wall in this house is 120 tons of thermal mass.  He compares the heat effect with that of a rock in the sun. The rock will heat up and then release the heat after the day has cooled, compared to wood “which has little mass. This building is designed and positioned to trap solar power. “It’s a tight home. There’s not a lot of air leakages.“  Burn goes on, “There’s a lot of glazing on true south with an effect like a greenhouse. There are no north facing glazing, and the windows are all double paned glass to harness the heat and break down the UV rays to prevent ultraviolet damage. We also have a heat recovery ventilator pumping in fresh air.

There is a small, five-kilowatt furnace to heat the house, along with a wood stove. Because the walls capture and hold the heat so well, “in a 24 hour power outage, the temperature in the house may only drop half a degree.”

The one potential limitation with rammed earth construction is that it’s not something that is easy to work with on any thing more than 10’ off the ground. From an engineering point of view, “15-18 ft is allowed without excessive engineering or adding cement. --From a green perspective, the less cement the better. Cement is very environmentally damaging.“

Jennings says part of the reason rammed earth it’s not more commonly used in BC is the additional cost. Jennings says that a rammed earth house costs approximately 15% more than a stick house, however there are savings in heating and maintenance, as well as health advantages. Because water doesn’t penetrate the walls, there is no mold growth, and no noxious chemicals.

The house can’t help but fulfill its destiny. It will sit here, on top of the rock, as solid as a rock, for many years to come.