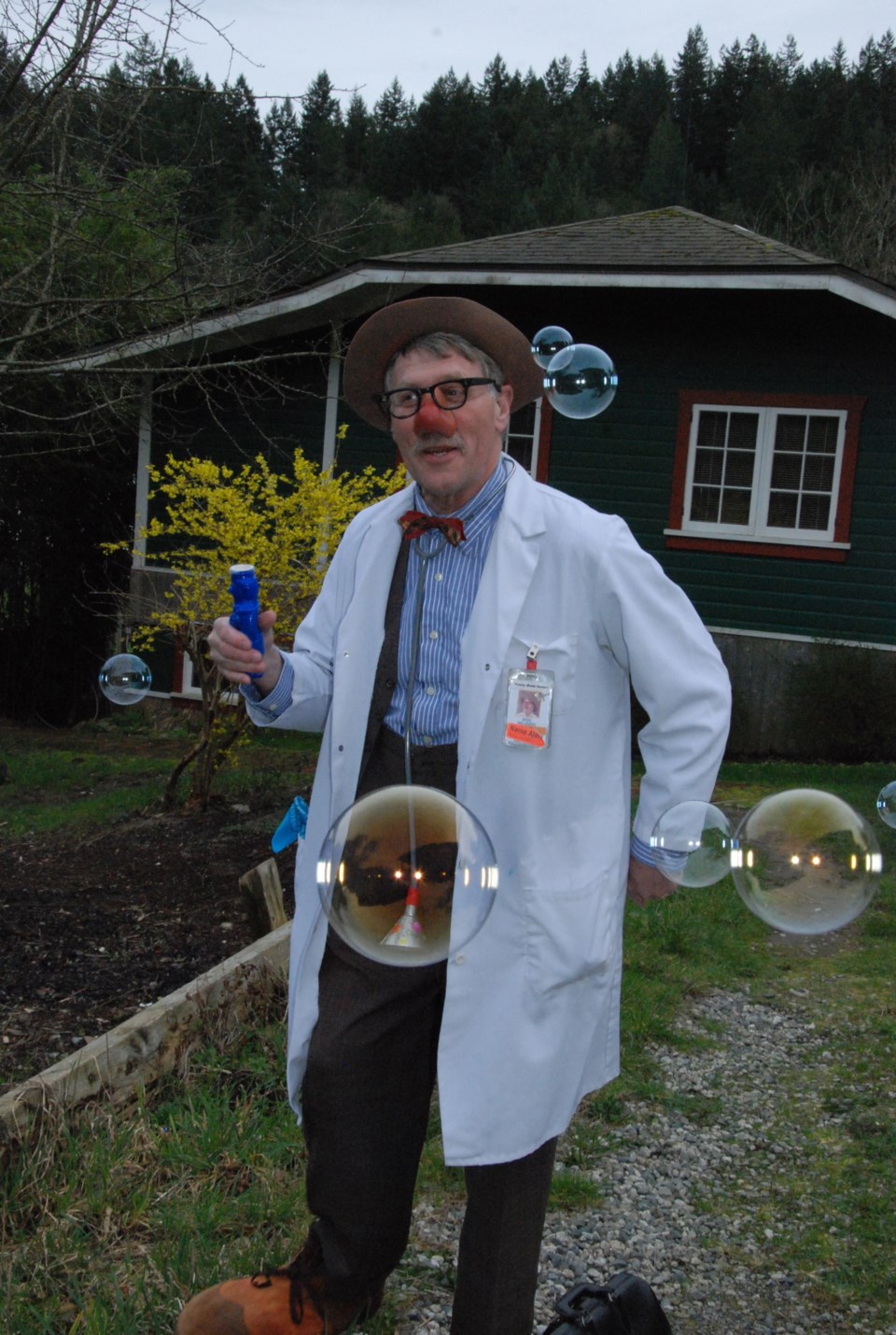 Paul Hoosen stumbled along a career path that few have ever chosen. Between university and retirement, Hoosen chose to be of service to the sick and dying; not as a traditional medical caregiver, but instead, he pioneered a healing art called Therapeutic Clowning.

Hoosen does indeed stumble, but it is intentional, just as every look, every motion, every trick he has up his sleeve is calculated and strategic. Hoosen has a depth and breadth of knowledge about body language and psychology that only comes from decades of intensive fieldwork. Clowning, for therapeutic purposes, is no laughing matter.

He explains that he is not a North American style clown, or a “scare clown”, as he calls “the crazy haired clowns” common in Canada. “I’m modeled on European clowns, more like the ones in Cirque du Soleil.“ His main character wears a doctor’s coat, oversized shoes an oversized red nose and a hat. While this character is not silent, he uses props and tricks that incorporate techniques that he learned from the master of mime, Marcel Marceau.

Hoosen, the son of academics, decided after a year of university that he wasn’t cut out to walk a straight and narrow path. It was the “era of self-expression, social issues and big theatre.” He went travelling into Europe and Africa and came back to BC to work in the technical side of theatrical productions. Along the way, he audited a mime class, discovered his talent for mime applied to study under Marcel Marceau in Paris. To his surprise, he was accepted. The undergrad left university and took off to Paris where he met other like- minded people. They formed a troupe of six street performers that included mime, fire breathing, a slack rope performance and various theatrics.

The troupe worked hard, moving around the city to what would become their designated locations. “We would start at 9 a.m. and work til 2 or 3 a.m. doing 10 shows a day.“

While the troupe was at one of their usual locations, a space they shared with the famous tight-rope walker Philippe Petit who later went on to walk between the Twin Towers, Salvador Dali approached the ringmaster.  Dali, a celebrated artist, was living in Le Meurice Hotel, a 19th century palace that was now a posh hotel for select clientele. Dali approached the troupe, wishing to hire them for a private performance in the hotel, specifically, in his suite.

The manager heard about the arrangement and became agitated at the idea of a bunch of buskers trooping into the luxury hotel. Part of the problem was that they weren’t just jugglers and mimes who were living hand-to-mouth, the troupe included two fire-breathers who obstinately insisted that they be allowed to perform inside the hotel. When the fire-breathers agreed to blow fire out the tall narrow windows above the gardens of the Tuilleries, the manager allowed the group to enter. “Salvador Dali was really into mobiles, and he had mobiles hanging all over the room,” says Hoosen. “He also had a life-sized stuffed camel in the room.”  Hoosen says that in a way, the troupe and the artist were of like minds; both were pushing artistic and cultural boundaries.

The room was cleared, furniture pushed aside, with seating for thirty of Dali’s friends. On the stage was one thing; a small, heavy table, with a phone that had possibly been forgotten during preparations.

The performance kicked off and the energy grew with each act until the fire-breathers took to the stage. Caught up in the moment, they ignored their agreement to blow fire out the window. They knew precisely how far the flames would travel and sent a burst of flames into the room, blackening the ceiling with smoke. “The manager was apoplectic but Dali just gave the manager a look that said “don’t worry, I’ll cover it,” and the show continued.“ Hoosen was the mime who created atmosphere. He was holding a cloud in each hand, bringing wind into the scene. Half-way across the stage, the phone, still on stage but previously forgotten, rang. “Dali marches onto the stage, picks up the phone,” swears into it “and slams it down,” says Hoosen, laughing at the memory. “Then, he realizes he is on stage, so he we do the passage together.” He enjoys the memory. “Working for Salvador Dali was my first paid job,” says Hoosen.

By the time Hoosen was back in Canada, it was the mid-seventies and “mime had become irrelevant.” He managed to find work teaching mime at a dance school in Toronto. He expanded into clowning and began doing shows in schools, pushing for acceptance of clowning as a viable form of artistic expression and entertainment, just as mime had been. He also worked as the puppeteer for Fred Penner, a children’s performer. Canada was becoming a world leader in children’s entertainment and Hoosen was good, some would say, “the best,” in his field. He had honed his timing, the nuances of silent conversation and gesture, enacting an inner dialogue and joking out loud. He routinely put himself into a diminished position relative to his audience and built up a travelling show that he took “to every school in the country.” Hoosen says by the time Canada Council decided to provide grants for him to initiate therapeutic clowning in hospitals, he had “had to make some hard decisions; to focus my career on children.”

In ’76 he founded Cirque Alexandre which operates as a non profit society in Nova Scotia, BC. and Ontario. “I worked with Child Life, who advocate for the psychological and social needs of kids in the facilities.”

As if on cue, two other programs sprang up in other parts of the world. One of the women in his troupe in Paris similarly started a program in the U.S., while in France, Le Rire Medicins, has been recognized for their therapeutic value, officially deemed a “French National Cultural Treasure.” Hoosen is free to walk into any department in a hospital, “short of surgery.” This freedom has given him the chance to go into hospitals and finesse the therapy into the form that it is today. For the first 20 years, for instance, Hoosen’s character never spoke a word, now his approach has shifted into a speaking character.

In this way, Hoosen is a controversial figure in the world of clowning. “I don’t believe in staying in character,” he says. He has learned that in working with teens, for instance, he can build a relationship by dropping character, “pulling aside the curtain,” and using social or sport references used by teens. “I’ll show them how to do my magic trick, or I’ll ask them to teach me one of their own. We create a dialogue we can build on.” He says some professionals frown upon this technique, of a clown stepping out of character or giving away a magic trick.

As one of the world’s first professional therapeutic clowns with an established protocol, he says “no one can tell me I’m not doing it right. I’ve been doing this for 45 years.” By softening the character, “it encourages the kids to share.”

Like a magician, he can shift the focus in a room temporarily off fear and despair. “I spot the people who are marginalized, unnoticed otherwise, and lonely.” He reaches out and touches hearts.

One particular example of results from his life-changing efforts has been portrayed in the media, with the story of Wilson Liu. Wilson suffered from Batten’s disease, a life-shortening disorder. He began to go blind at five-years-old.  Still, Wilson grew up to play the trombone and electric guitar in the youth orchestra at Camp Bowen. Under Hoosen’s tutelage, as a young man facing the end of his life, he kept up his spirits, in part, by becaming a trained clown. With Hoosen, he clowned at Bowfest and in the parade. “He was a First Response Clown, cooling the audience with a spray gun. I would squeeze his elbow to signal him when to spray, and no one knew he was blind.” Together, they were just two clowns and an audience having fun. “As a clown, you can do amazing things by drawing out what’s inside.” The young clown died at 22, but not before being honoured by the Vancouver Fire Dept. with the Youth Community Hero Award. “He was so inspiring.”

Hoosen says that “when you work in hospitals you focus on life, not the pain and dis-ease.” He explains that his clown character, “Dr.Albert Einstein, the Turd, twice removed,” is childlike, but not childish. “There is always a logic. You are playing with status and hierarchy. It’s about success through failure. The patients grow in status as you diminish.”  He explains clowning like a scientific equation where connection is the final objective. Find an emotion, take away a threat, add some amusement. He has to be clinical about sanitation of all his props and materials, and precise in calculating the personal dynamics in any room. He chooses his words with care. While clowning may trigger an image of a buffoon, Hoosen is no fool.

Hoosen says that medical schools are paying attention to bedside manner, which is why he shares his insights at the faculty of medicine at UBC. In Vancouver, he has initiated programs at Sunnyhill, Children’s Hospital and at Canuck Place where he also teaches his techniques.

Hoosen walks into a room and “the moment a child sees me, my antennae is way, way out,” picking up subtle cues that guide his course of action. He explains that he’s “not in there doing a show. I’m not entertaining. I’m building a relationship. It’s about interaction. It’s a conversation,” even in moments of silence.

“If I see a child in the hall coming towards me, I  step sideways, so I’m not in a confrontational position,” he likes to use bubbles as a tool. “They are magical and gentle. I stand beside them and we experience the moment together.” From there he can move into a dialogue. Hoosen often takes on the persona of a feckless character but what he does is never an act, but a psychological strategy to build a relationship. If a patient can relax and smile, Hoosen is happy.

He has different tools and strategies he uses for every age group, and every situation, and he uses those tools with the precision and to great effect.

Considered a leader in the field, this summer Hoosen will be presenting a talk on therapeutic work with teens, at a world conference in Spain.