EDMONTON — Alberta Premier Jason Kenney is drawing a line in the sand for 18 of his backbenchers who are openly criticizing public-health restrictions meant to face down COVID-19.
Apr 8, 2021 2:48 PM By: The Canadian Press 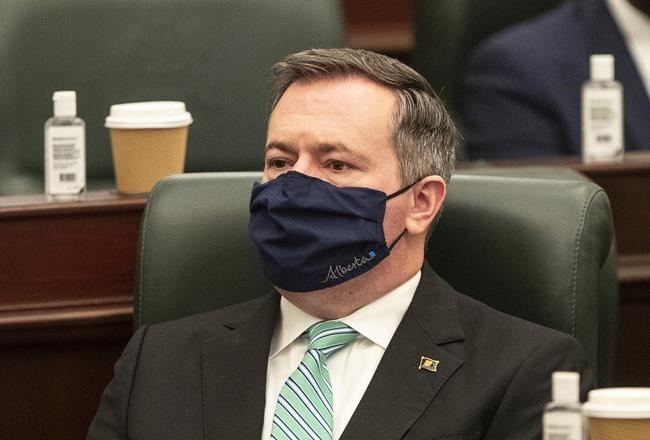 EDMONTON — Alberta Premier Jason Kenney is drawing a line in the sand for 18 of his backbenchers who are openly criticizing public-health restrictions meant to face down COVID-19.

Kenney says dissent is part of a democracy, but adds he has warned United Conservative legislature members that flouting the rules means disciplinary action that includes getting kicked out of caucus.

“I made it very clear to my caucus this morning that while we accept a diversity of opinions and I totally respect the obligation of members to represent their constituents … the government caucus could not tolerate any member counselling people to engage in civil disobedience or to break public-health measures,” Kenney said Thursday.

“I think that’s well understood by our team.”

Asked if he would remove violators from caucus, Kenney had a one-word reply: “Yes.”

Almost half of the party's 40 backbenchers are publicly condemning a return to stricter health restrictions Kenny announced this week. They want eased rules or, if not, targeting them in areas with high COVID-19 case rates.

Sixteen of the politicians, most representing rural constituencies, have signed an open letter saying the changes are a step backwards that threatens livelihoods and freedoms.

One of them is Nate Horner who represents Drumheller-Stettler.

Others who signed the letter include Speaker Nathan Cooper and former municipal affairs minister Tracy Allard. Allard left cabinet in January after a public outcry over a trip to Hawaii for Christmas, despite the government urging Albertans to stay home.

Legislature member Martin Long didn’t sign the letter, but is also critical of the tighter restrictions. Fellow caucus member Dan Williams wants them to be eased for worship services.

“Worship is a fundamental freedom that we must maintain,” Williams said in a video posted to social media Wednesday. It was the same day Alberta Health Services closed down an Edmonton-area church charged with ignoring capacity limits on services.

“I respect and understand the 15 per cent capacity limit. I’m frustrated by it. I’ve brought it up in the legislature multiple times that we should be lifting these numbers,” he said.

The province has been imposing, amending, deleting and reimposing rules for businesses and public gatherings for more than a year to try to reduce the spread of the novel coronavirus while keeping the economy and public life as normal as possible.

This week, Kenney again closed restaurants to in-person dining, put a halt to group fitness activities at gyms and rolled back customer capacity at retail stores to 15 per cent from 25.

He said that despite more Albertans being vaccinated, a recent spike in variant cases would overwhelm health care in five weeks if further restrictions were not imposed.

More than 756,000 Albertans have received at least one dose of vaccine. Kenney said the vaccines, along with other factors, may allow the government to eventually return to regionally targeted restrictions, as was done for a while last year.

The backbenchers are not in Kenney’s 22-person cabinet and therefore not part of government.

The Opposition says all legislature members have influence and authority, and suggests that Kenney is putting lives at risk by allowing some of them to question health restrictions and the science that underlies them.

“Jason Kenney is a weak leader who does not recognize the consequences of this (caucus) revolt,” said NDP Leader Rachel Notley.

“These (dissident) MLAs need to be telling Albertans to keep each other safe, not putting them in danger. They’re being irresponsible, selfish and, quite frankly, they should be ashamed.”

This report by The Canadian Press was first published April 8, 2021