PHNOM PENH, Cambodia — The trial of a Cambodian labour union leader charged with inciting social unrest opened in Phnom Penh on Friday, part of a large-scale legal offensive by the government against its critics.
Jan 15, 2021 12:18 AM By: Canadian Press 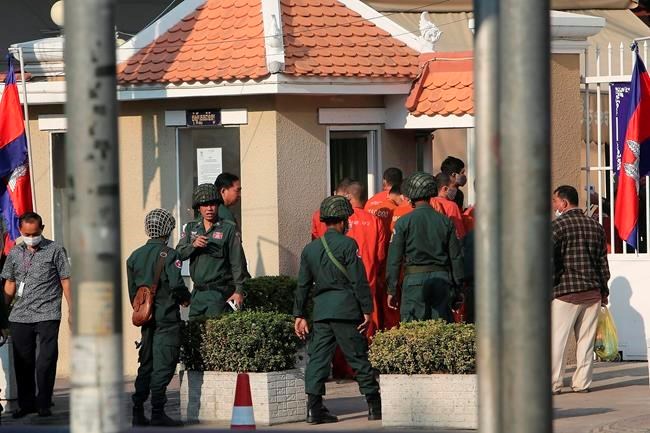 PHNOM PENH, Cambodia — The trial of a Cambodian union leader charged with inciting social unrest opened in Phnom Penh on Friday, part of a large-scale legal offensive by the government against its critics.

Rong Chhun, president of the Cambodian Confederation of Unions, is standing trial for “incitement to commit felony” for comments concerning territory in border areas, a politically sensitive issue. If found guilty, he could face from six months to two years in prison.

Rong Chhun was arrested in July after the government claimed he spread false information about Cambodia’s border with Vietnam. He has been held in detention ever since. A week before his arrest, Rong Chhun gave an interview to U.S. government-supported Radio Free Asia in which he spoke about meeting farmers in eastern Cambodia who complained about their land being infringed upon by Vietnam.

His trial is part of a crackdown on opposition politicians and supporters carried out in the courts by Prime Minister Hun Sen's government. According to the human rights group Amnesty International, about 150 individuals affiliated with the banned Cambodia National Rescue Party are facing treason charges in mass trials, the first of which was held Thursday.

leaders such as Rong Chhun hold significant political influence in Cambodia because they represent the vast number of industrial workers in the textile industry, which is the country’s major export earner. The major unions have historically aligned themselves with the political opposition to Hun Sen.

The issue of Vietnam encroaching on Cambodian land is a highly sensitive one with domestic political significance in Cambodia because of widespread historical antagonism toward the country’s larger to the east. Hun Sen’s government maintains close relations with Vietnam, leading his political foes to accuse him of failing to protect Cambodian land. Several prominent opposition figures have been prosecuted on various charges in recent years for making such allegations.

Sam Sokong, a lawyer for Rong Chhun, said his client has done nothing illegal in his interview with Radio Free Asia, and that he only had relayed the complaints of villagers along the border to the public at large.

Rong Chhun served on the national election committee of the opposition Cambodia National Rescue Party before it was dissolved by court order in November 2017, ahead of the 2018 general election. The party dissolution was generally seen as intended to ensure victory for Hun Sen’s ruling Cambodian People’s Party. Hun Sen has been in power for 36 years, and has often been accused of heading an authoritarian regime.