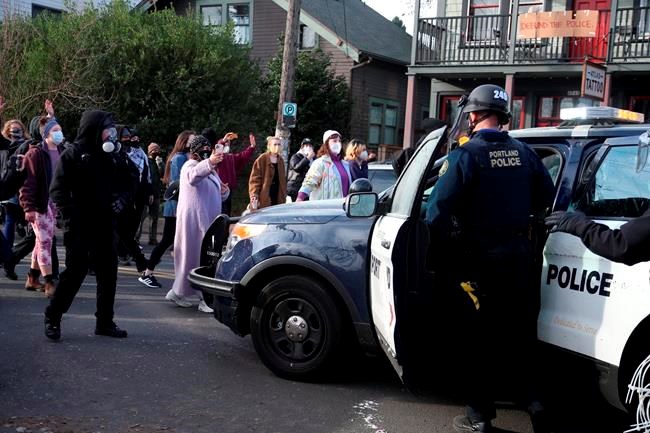 PORTLAND, Ore. — Protesters barricaded streets in a Portland, Oregon, and set booby traps for police after officers arrested about a dozen people in a clash over gentrification and the eviction of a Black and Indigenous family from a home.

Several city blocks were still closed off Wednesday by blockades fabricated with wood, metal and wire fencing. Protesters dressed in black and wearing ski masks stood watch from atop a nearby wall.

The street behind the blockade in the of homes, coffee shops and restaurants was laced with booby traps aimed at keeping officers out — including homemade spike strips, piles of rocks and thick bands of plastic wrap stretched at neck-height across the roadway.

It recalled more than four months of clashes between police and protesters decrying racial injustice and police brutality that only abated weeks ago, and Mayor Ted Wheeler — whose handling of the unrest almost cost him reelection — said the city would not tolerate an “autonomous zone." The earlier protests angered President Donald Trump, who sent U.S. agents to protect a federal courthouse targeted by demonstrators.

“Those at the barricade should put down their weapons, leave it behind and allow the to return to peace and order," Portland Police Chief Chuck Lovell said Wednesday in a Twitter video. “Portland police will enforce the law and use force if necessary to restore order.”

Supporters of the Kinney family, the Black and Indigenous family that faced foreclosure, say the home was unjustly taken through predatory lending practices that target people of . The property sold at auction for $260,000, the family said, while the private land next door is valued at more than $10 million.

Julie Metcalf Kinney, the family matriarch, said her father-in-law bought the house in 1955 and she gave birth to both her sons there. Nearly all the Black families that lived in the are now gone after a push to extend the city's famed light-rail train north began in 1998, she said.

The occupation of the property began in September after a judge rejected the family's request for an emergency stay.

But it gained steam and national attention Tuesday when officers responding to the new owner's complaints conducted a dawn sweep and arrested about a dozen people.

The 124-year-old house is known as the Red House on Mississippi and was one of the few remaining Black-owned homes on North Mississippi Avenue.

It's in a historically Black part of Portland that for decades was one of the few areas Black residents could own homes because of racist real estate and zoning laws.

Over the past two decades, the area has rapidly gentrified — with brew pubs, coffee shops, bicycle shops and upscale condominium complexes replacing Black residences. The Kinneys' former small red house is dwarfed by a modern apartment complex next door where one-bedroom apartments start at $1,200 a month.

The clash draws on that troubled history and also fits into a larger worry in Oregon — and nationally — about what will happen when pandemic-inspired eviction moratoriums enacted by the state and the U.S. government expire in the coming weeks.

Oregon lawmakers are debating a proposal to extend that moratorium until July 1 and establish a compensation fund for struggling landlords.

Housing advocates worry that if nothing is done, a tsunami of evictions in 2021 will lead to hundreds or thousands of newly homeless people in Portland and around Oregon.

Protesters say the Kinney family should not have been forced to leave during a pandemic and should be protected by the eviction moratorium.

But the moratorium only applies to foreclosures that are a result of pandemic-related financial straits, and the developer that owns the former Kinney home bought it at a foreclosure auction in 2018.

According to a history posted online by the group protesting the eviction, the property was initially purchased in full with cash.

But the Kinneys took out a new mortgage to pay lawyers after a 17-year-old son was arrested in 2002 after a traffic crash. He pleaded guilty to assault in a plea deal, according to court records.

The new loan was resold several times after the housing crash of 2007-08, and the house was sold to Urban Housing Development LLC at auction in 2018 — but the Kinneys kept living there, according to court papers.

The developer sued in 2019 and the Kinneys countersued, arguing that illegal and predatory bank tactics cost them their home. They later filed a motion for an emergency stay that allowed them to stay in the house during the pandemic.

Mark Passannante, an attorney for Urban Housing Development, did not immediately respond Wednesday to a message seeking comment.

In September, a judge rejected the stay and ordered the family out. Protesters began an occupation of the property shortly after that decision and have been there ever since.

Police said in a statement Tuesday that between Sept. 1 and Nov. 30, there have been 81 calls to the property for fights, gunshots, burglary, vandalism and noise complaints, among other things.

Surrounding homeowners also complained that the sidewalks were blocked and they could not get to their homes, police said.