Number of coronavirus infections growing as 151 new cases reported in the past week in North Vancouver and West Vancouver; social gatherings account for most of the spread
Feb 18, 2021 2:50 PM By: Jane Seyd 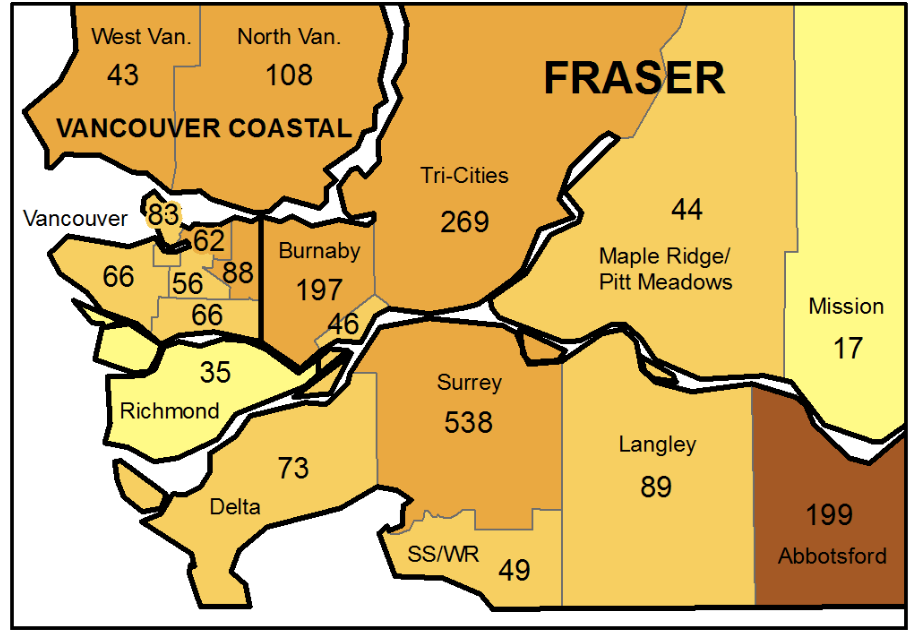 A map showing the geographical breakdown of new COVID cases in the Lower Mainland for the week ended Feb. 13.BC CDC

Cases of COVID-19 continue to increase on the North Shore, in what is becoming a concerning trend.

Cases of new coronavirus infections are up in North and West Vancouver, for the third straight week in a row.

There were 151 new cases for the week ending Feb. 13, according to information from the B.C. Centre for Disease Control.

Of the new cases reported this week, 108 were in North Vancouver and 43 were in West Vancouver.

Overall, the rate of new infections on the North Shore has risen to between 10 and 15 daily cases per 100,000 people.

That is a rate similar to Surrey, Burnaby and the Tri-Cities area and higher than rates in much of Vancouver, Richmond, Delta, Langley and Maple Ridge.

This week, Dr. Bonnie Henry, the province’s medical health officer, voiced concern about the recent rise in the number of infections in the Lower Mainland.

“We are very concerned that in some of our higher population areas, particularly in the Fraser Health region and Vancouver Coastal Health regions, we're starting to see an uptick,” said Henry. “We need to reduce the transmission events that are happening in our community. Once we start to see increases, they rise very quickly.”

Henry said about 40 per cent of the recent infections can be traced back to social gatherings “that should not be happening right now.”

“It has implications, even though you think that you're not at risk, or your family's not at risk.”

Henry described a recent “games night” involving 50 people “in an establishment that should not have been having a games night” that led to 15 people becoming infected, which soon spread to other workplaces, schools and a childcare centre. Henry did not say where the event took place.

“You know, we in public health cannot be everywhere. We can't be in every pub or restaurant or business or every place all at the same time. We need to hold each other accountable right now for stopping the spread, because that's what's going to get us into the spring, where we have enough vaccine to protect people,” she said.

Rates in Whistler remain a trouble spot for COVID in the Lower Mainland, although numbers of new cases there are decreasing. Whistler reported 72 new cases for the week ended Feb. 13 – about half of the number of cases reported the previous week. Most of the cases in Whistler have been reported in young adults who work, live and socialize together, according to health authorities, and most cases have been spread within households. Rates are lower elsewhere in the health region, with two cases reported on the Sunshine Coast and no cases reported in Powell River in the week ended Feb. 13. Richmond had 35 cases.

On the North Shore, the increase in new case numbers comes at the same time as a dramatic spike in recent notifications for school exposures to the virus.

About 50 exposure warnings have been sent to classes throughout North and West Vancouver this month.

Elsewhere in the province, COVID hot spots include a number of north coast communities, as well as Merritt and the ski resort community of Revelstoke.

B.C. had recorded a total of 74,700 cases of coronavirus as of Wednesday, with 4,150 active cases provincewide. In the Vancouver Coastal Health region, there were 968 active cases.

Supplies from the vaccine manufacturer have been reduced in recent weeks, although Henry said she remains optimistic that the number of doses will be made up between now and the end of March.

“It doesn't make vaccine come any quicker to be upset or angry or mad or frustrated,” she said. “We’re playing the hand we were dealt. And we are committed to getting immunizations into people's arms to protect people as fast as we receive them.”