Social gatherings to blame for spread of virus as North Shore schools send out about 50 COVID warning notices this month
Feb 19, 2021 1:15 PM By: Jane Seyd 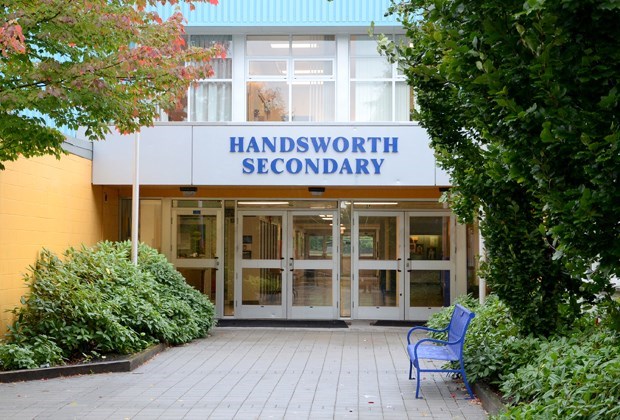 A Grade 12 class at Handsworth Secondary in North Vancouver is among over 50 on the North Shore which recently reported a COVID-19 exposure. photo North Shore News

Four more classes have been added to the growing list of COVID exposure warnings on the North Shore.

They add to a list of approximately 50 other warnings sent to families in North and West Vancouver schools this month as the number of coronavirus cases has spiked on the North Shore.

In West Vancouver, West Bay Elementary has reported another COVID exposure in a Grade 5 class on Feb. 9 and 11 and students have been told to self-monitor for symptoms.

West Vancouver Secondary has also reported an exposure in a Grade 11 Spanish and accounting class with an exposure date of Feb. 16.

In North Vancouver, a COVID cases has been reported in a kindergarten class at Carisbrooke Elementary with exposure dates of Feb. 10 and 11.

At Ecole Handsworth Secondary, a COVID case has been reported in a Grade 12 law studies class on Feb. 10 and students have been told to self-monitor.

In addition to the school exposures, more than one participant in a program held at the West Vancouver Arena Feb. 8 has also tested positive for COVID, according to the District of West Vancouver.

There has been no confirmation of which program was involved; however, parents sharing information on a local COVID Facebook page indicated the exposure was in a youth hockey program. The arena has remained open, with COVID protocols in place, and has received enhanced cleaning, according to the district.

A spike in COVID exposure warnings in local schools that began 10 days ago is growing on the North Shore, with approximately 50 warnings sent out to schools since the beginning of the month.

About 30 warnings were sent out over the Family Day weekend, on top of over 20 COVID exposure warnings sent last week and in the first week of February.

Coralynn Gehl, who runs a local Facebook group where parents share information about school cases, says she’s noticed a definite uptick in the number of warnings sent out recently.

“For sure there’s an increase in school exposures on the North Shore,” she said, adding in comparison she posted about 12 warnings in January.

In almost all cases, the recent exposures are coming from COVID cases spread in social settings outside of school.

“I’m hearing about gatherings. That’s the overarching theme of the people who are contacting me,” said Gehl. “I’ve had dozens and dozens of people message me over the past week. It’s parties and birthday parties and all the things we’re not supposed to be doing right now.”

In some cases, “people are letting their kids go out on the condition they hang out with friends outside” but then “it’s turning into a situation where someone says, ‘Hey, my parents aren't home, let's just go hang out in my basement.’”

Last week, parents and teens on the North Shore were warned to stop socializing in contravention of public health orders after a party involving students from multiple schools led to a number of new COVID cases among teenagers and their families.

“So far two secondary schools have been impacted and several households in our community are now under self-isolation,” stated a letter that went out to parents at both Handsworth and Ecole Argyle Secondary in North Vancouver Thursday evening.

In other cases, families are still organizing birthday parties in contravention of public health orders, said Gehl. “There are people still not taking this seriously,” she said.

Students at at least three schools – including a Grade 6/7 class at Seymour Heights, a Grade 6/7 class at Hollyburn Elementary and some students in Grades 5 and 8 at Collingwood private school – have been told to isolate after a number of COVID cases and close contacts were identified by health officials. In the case of Seymour Heights, the principal and vice-principal of the school have also been told to self-isolate and another administrator has had to step in.

Multiple additional classes have also been issued exposure warnings with instructions to stay alert for possible COVID symptoms. In North Vancouver, those include a Grade 6/7 class at Upper Lynn Elementary where at least three cases have been linked to out-of-school transmission. It also includes a Grade 1 class at Sherwood Park, a Grade 3/4 class at Carisbrooke, a Grade 6/7 class at Larson, a Grade 4 class at Capilano, a Grade 2/3 class and those who attend Kids Club after school care at Westview. A junior kindergarten class at Brockton private school also received a warning.

In high school, members of an after-school club received a notice at Sutherland and Carson Graham secondaries in North Vancouver, as did members of the Boys Club at Sentinel in West Vancouver.

Other notices that have gone out in the past two weeks include one to a Grade 11 pre-calculus class at Sentinel, to a Grade 9 English class and Grade 12 math class at West Vancouver Secondary, to a Japanese class at Rockridge Secondary, to a kindergarten/Grade 1 class at École Larson Elementary, a Grade 4 and kindergarten class at St. Edmund’s private school, Grade 3 and 5 classes at Highlands Elementary and to the Tsleil-Waututh Nation school.

On Monday, Dr. Bonnie Henry, the province’s medical health officer, said about 40 per cent of current cases are being traced back to social gatherings: “social gatherings that should not be happening right now.”

“It has implications, event though you think that you’re not at risk or your family’s not at risk,” she said