Cases of coronavirus have remained relatively stable in the Lower Mainland in the past month, but numbers are still too high to ease restrictions
Mar 4, 2021 3:41 PM By: Jane Seyd 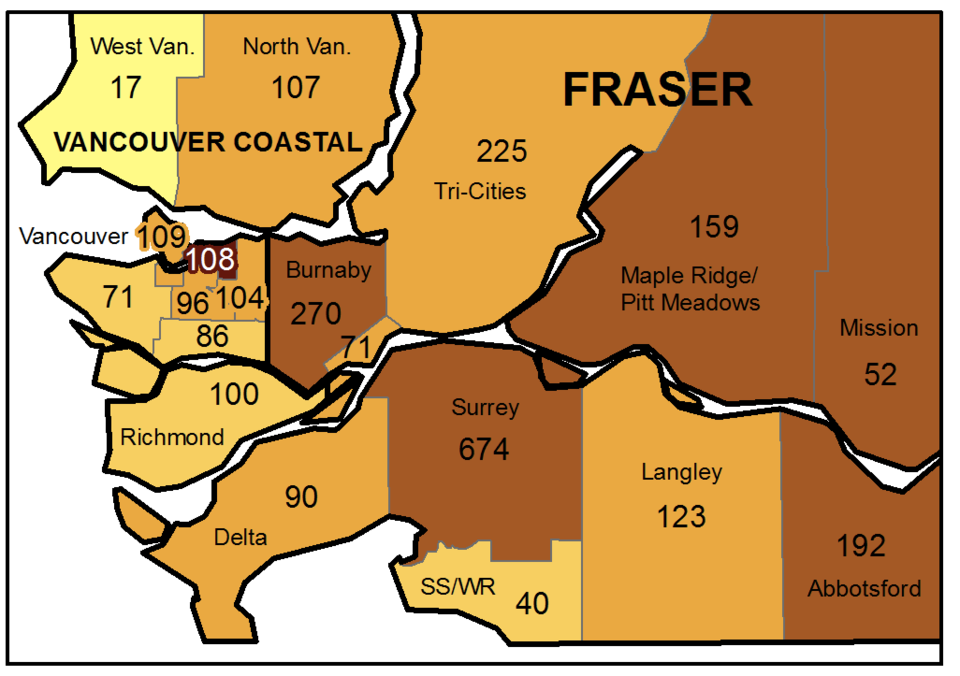 A map showing the geographical break down of COVID cases in the Lower Mainland for the week ending Feb. 27.BC CDC

The number of new COVID cases remained stable on the North Shore in the past week, with numbers of new infections continuing to inch downwards.

There were 124 cases of coronavirus in the week ending Feb. 27, according to information released by the B.C. Centre for Disease Control, compared to 141 cases the previous week.

Numbers of cases have been slowly coming down since a high of 151 two weeks ago. But that’s still substantially higher than the number of new cases that were being reported on the North Shore during January.

The breakdown of where those cases occurred is similar to previous weeks, with 107 new cases reported in North Vancouver and 17 cases in West Vancouver. In the case of West Vancouver, that represents a significant drop from a high of 43 cases two weeks ago.

The rate of new infections in West Vancouver has now fallen to below five daily cases per 100,000 people – the lowest rate of infection in the Lower Mainland for the past week.

February has so far been the worst month for school exposures on the North Shore, with more than 50 notices going home to families. In the vast majority of cases, those infections have been acquired through social gatherings in the community, according to health officials.

Numbers of cases in the Lower Mainland have remained high but stable overall during the past month.

Numbers have been creeping up in some areas, including Burnaby, Surrey, Abbotsford, Maple Ridge and the Downtown Eastside.

Positivity rates for COVID-19 tests are now hovering at about six per cent in Vancouver Coastal Health, and have been creeping up since the end of January.

Dr. Bonnie Henry, the province’s medical health officer, has urged people to remain cautious, stressing that residents should not give up on measures to stop the spread of the virus with hope of stopping the pandemic now on the horizon.

Vaccinations for people 80 and older in the general community will start this month throughout the province, including in clinics on the North Shore. There had been just under 290,000 vaccinations given in B.C., including about 203,000 first doses, as of Tuesday. This week, Henry announced second doses will now be given four months after the first dose, making first doses of the vaccine available for more people sooner.

Mass vaccinations for younger age groups are expected to begin in April.

Rates of COVID infections in Whistler, which spiked in January and first part of February, are continuing to fall in the community.

There have been over 700 cases of coronavirus in Whistler since Jan. 1, mostly in young adults who work, live and socialize together, according to health authorities.

Elsewhere in the province, the number of COVID hot spots has fallen. Several North Coast communities near Prince Rupert and Terrace continue to have higher infection levels, but cases have dropped in the Interior and other parts of the North.

B.C. had recorded a total of 81,909 cases of coronavirus as of Wednesday, including 4654 active cases. In the Vancouver Coastal Health region, there were 1,191 active cases.