A tale of two fronds: can you tell the difference between these Bowen Island ferns?

Our two types of plucky local ferns may look similar but here are a few clues that will help you to distinguish the plants
Jen Ritchie / Bowen Nature Club Jan 8, 2021 12:33 PM

In the depths of winter, everything seems dark and decaying, or hidden under a blanket of snow. However, two plucky local ferns remain green and cheery throughout the coldest and wettest days, reminding us that warmer, greener days are ahead.

These stoic ferns seem to withstand anything nature (or mankind) can throw at them. While they prefer indirect light and moist soil, once mature, these ferns are tough enough to survive most conditions: snow, drought, flood – even the acidic soil under cedars. They can thrive in heavily disturbed areas, which is why we often see them filling in old logging roads or construction sites. 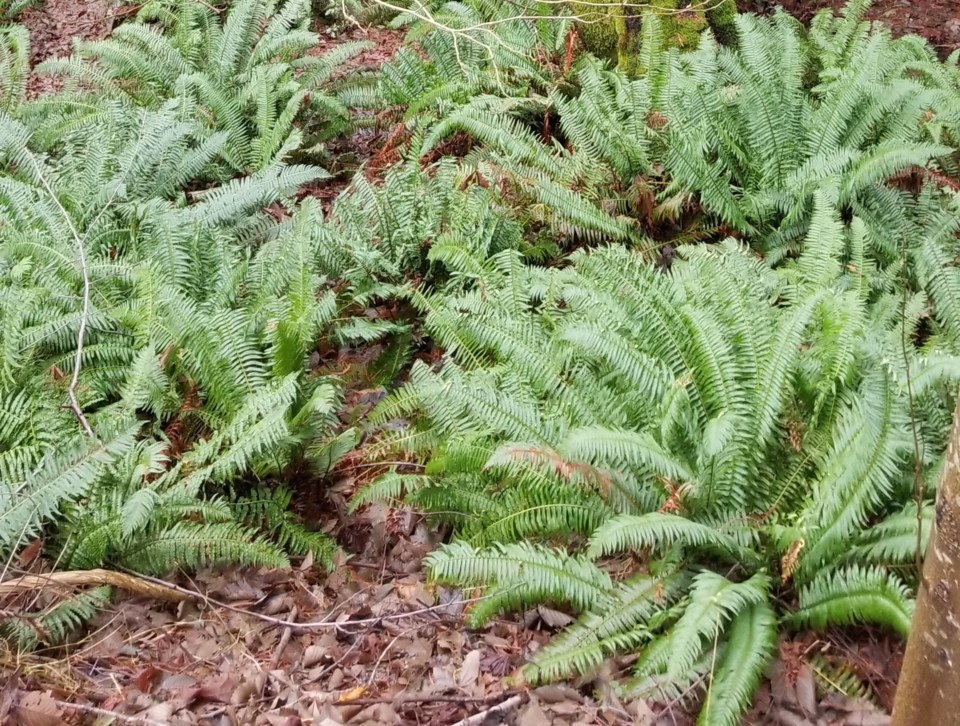 Western sword ferns thrive in heavily disturbed areas and can survive in most conditions. By Jen Ritchie

Indigenous peoples used these sturdy fronds to thatch structures, line beds and floors and separate food in storage baskets and cooking pots. The three-foot (one metre) fronds are edible but apparently taste exactly like leaves. In fact, only a few animals, like mountain beavers, will eat sword ferns. Their tubers are also edible, are said to taste like a sunchoke, and can be a good source of water, in a pinch.

Sword fern fiddleheads start appearing by late May and by August they release billowing yellow clouds of spores. Each frond may stay green for several years, and thus may keep some spores attached over winter and release them the next spring.

Grow them in your yard: To collect spores, place a frond in a paper bag and shake it. Sword ferns are also quite easy to divide and transplant if the roots are well developed. They require minimal maintenance, provide excellent groundcover, and help shore up steep slopes. Some people leave them completely au natural, although others like to keep them looking tidier and fresher by trimming off the older or dead fronds once per year.

Licorice fern fronds resemble sword fern fronds, so it can be difficult to tell them apart.

Both can grow off rocky bluffs. However, there are a few little tricks to distinguishing them: a big hint that you’ve got yourself a licorice fern is if it is growing off a big moss-covered broadleaf maple tree-- you won’t likely find a sword fern up there! Next, the licorice fern’s leaflets grow straight out from the frond’s main stem; the sword fern’s leaflets each have a tiny angled stem coming out from the main frond stem. Finally, the bright green fronds of the licorice ferns are usually only about 12 inches (30 cm) long. 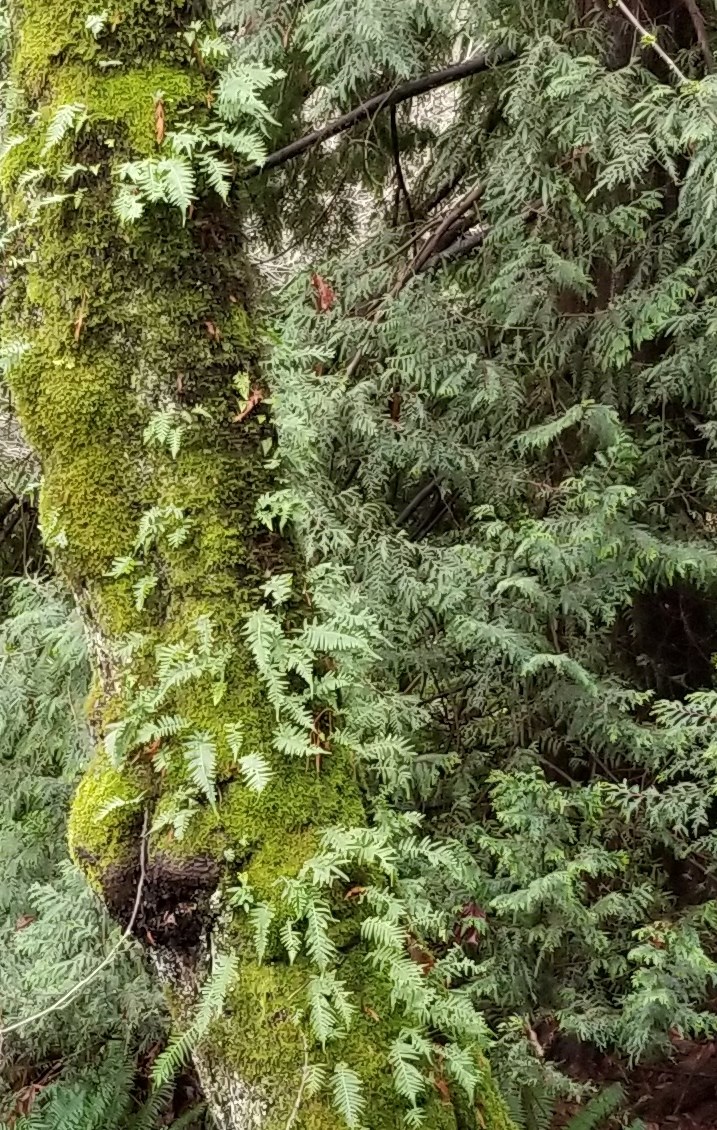 The rhizome of the licorice fern can be just as long as a frond, and sprout many ferns along it. If you want to try eating the rhizome, you will probably need a pocket knife to cut a little piece off, because if you just pull on the root, you might get the entire thing, which can destabilize the whole system of ferns.

The lighter-coloured rhizomes are younger than the darker woodier ones, and thus better for harvesting. Normally, you wouldn’t actually “eat” the root, but rather just chew on it, or use it to make tea. It is surprisingly sweet.

In late spring into early summer, as the temperatures rise, the moss dries out and licorice ferns lose their reservoir of moisture. Then the fronds fall off and the fern rests for the summer. The fronds reappear with the autumn rains.

Grow them in your yard: To collect the spores, cut a frond in late winter and let it dry in an open paper bag. The spores will fall off as it dries. You can also buy the whole plant at a nursery. It’s best not to transplant a licorice fern from the wild, unless you are saving it from a maple tree that has been logged and will be destroyed. Then you want to collect a fair bit of the moss along with the rhizome. Also pick a spot to plant it that is naturally mossy, shaded and moist.