It’s a rainy start to June. The Environment Canada forecast calls for weekend highs of 16 and 21 with showers and risk of a thunderstorm Saturday and a 40 per cent chance of showers Sunday.
Jun 5, 2020 6:13 PM By: Bronwyn Beairsto 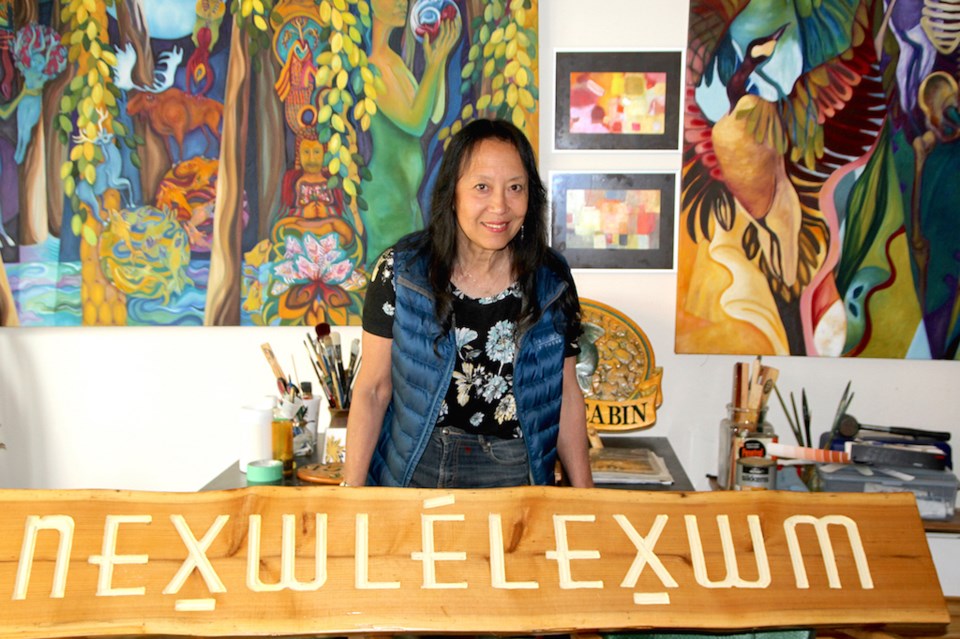 Coral Louie of the Sign Studio made the current “Bowen Island Welcomes You” sign and now, thanks to local initiative, she’s made a new sign with the island’s original name to accompany the old landmark.Meribeth Deen

It’s a rainy start to June. The Environment Canada forecast calls for weekend highs of 16 and 21 with showers and risk of a thunderstorm Saturday and a 40 per cent chance of showers Sunday.

When one parking lot closes: The parking lot across from the museum is closing as of Monday. DK Harris bought the piece of property from the municipality and the sale closes Monday, at which point the developers will have a ground breaking ceremony. The housing development is to construct 27 new rental units. BIM said that it's working on options for more parking in the cove.

Eagle Cliff Water System is now under stage two water restrictions: “The reservoir level is lower than it should be at this time of year,” said BIM’s press release. “Utility crews are monitoring levels and investigating the cause. Meanwhile, water conservation efforts may help mitigate the lower level.”

Stage two restrictions include: lawn watering three days a week max.; spring-loaded shut-off nozzle only for car and boat washing; power or surface washing for safety or painting prep only; top-up only for pools, hot-tubs, fountains or ponds.

It's called Nexwlélexwm: Squamish people called this island Kwilàkm and Nexwlélexwm long before settlers attached “Bowen Island” to its shores. Now the island will recognize its original name with a sign at the Snug Cove Dock alongside the “Bowen Island Welcomes You” sign. Coral Louie, the same sign maker who made the Bowen Island Welcomes You, made the new sign. The sign will be unveiled June 21 (National Indigenous Peoples Day) with representatives from the Squamish Nation and select Bowen Islanders (due to COVID the ceremony isn’t open to the public but will be livestreamed.) Read the story here.

Bowen’s latest best-seller: "The Bowen Island Conservancy released 300 copies of its Marine Atlas of Nexwlélexwem/Bowen Island in early May. Quinn and Jared of Phoenix on Bowen have done a fabulous job taking telephone orders and organizing contact-free pickup. People are getting The Marine Atlas for themselves and as a gift for anyone with curiosity about our marine world. Students and teachers are using the Marine Atlas to guide outdoor classroom activities when schools are closed. Within three weeks, most copies have been snapped up. Atlas authors Len Gilday, Will Husby, and Bob Turner, working with editor Susan Munro, are now preparing a second printing. The Marine Atlas should be back on Phoenix’s bookshelves very soon. Please stay tuned for further information." ––Len Gilday

Join the World Oceans Day celebrations June 8: "Monday June, 8 is World Oceans Day. You can also take a virtual dive into this little corner of the ocean with a night of storytelling, Celebrate Howe Sound / Átl’ka7tsem, hosted be Fiona Beatty and Bridget John on Zoom.  The themes for the evenings’ stories include; connection to place, adventure, species and habitats, and culture. Bowen Islanders including Pauline Le Bel, Bob Turner, Diana Izdebski as well as Bonny Brokenshire and her daughter Taya have submitted videos sharing their stories. The webinar is free to attend, and all registrants will receive a recording that you are free to share. If you are unable to attend the live broadcast, registering for the event will allow you to watch the recording at your convenience. To register, look up Celebrate Howe Sound / Átl’ka7tsem or go to the news tab at howesoundguide.ca." ––Meribeth Deen

Reopening: several restaurants reopened for in-house dining this week including Doc Morgan's, the Bowen Island Pub and Barcelona. We'll keep up with the details as they're released in this evergreen story.

The new BIM boss: I caught up with the new chief administrative officer this week. Liam Edwards comes to Bowen from the province’s Local Government Division of the Ministry of Municipal Affairs. As the new islander had been working remotely from Halifax, he and his family moved across the country during a pandemic. Read the interview here.

This week’s update noted that there's a section of the virtual EOC that answers frequently asked questions such as “what is my social bubble” and “self-isolation is mandatory for people returning to Canada from international travel. What do I do if I see someone breaking this rule?”

“Bowen Island is not immune to racism and discrimination of all kinds,” he said and shared the Lieutenant Governor’s ‘Different Together’ pledge.

Ander also noted the need to keep social bubbles small, two to six people from outside of the household, and “air hugs only at this time.”

Looking to next week:

BIM’s emergency program coordinator is presenting the draft emergency management plan to mayor and council in a committee of the whole meeting. The plan “guides the operations, organization, responsibilities, and coordination of the Bowen Island Municipality Emergency Operations Centre in response to an incident or threat of an incident on Bowen Island.” Islanders can tune in Monday at 5 p.m. on YouTube.

On the slate for Monday’s regular council meeting:

It was the last week of submissions for the Legion’s talent show. There's guitar playing, singing and Tiger King reenactments. Voting for all three weeks is open until Monday at noon.

For at least the third time in 2020, we’re in a historical moment.

We saw the Wet’suwet’en Land Defenders and solidarity demonstrations across Canada bringing the issue of Indigenous land rights and title to the fore. In March COVID interrupted daily life, devastating many––especially those already marginalized. But now is not the time to look away.

The Black Lives Matter protests are making sure we ignore racial injustice no longer, and as uncomfortable is it is to confront our complicity, now is not the time to look away.

If white Canadians are feeling smug about our relationship with racism––it was just a year ago that the National Inquiry into Missing and Murdered Indigenous Women and Girls found that Canada is complicit in race-based genocide in a 1,200-page report. We said we’d do better then. What have we done? How many of us read that report?

On Bowen we’re quick to say “not here, not us” when people, often people of colour, speak up about racism on-island. People who’ve experienced racism have had to defend their own experiences.

I’ve spent a lot of time this week wondering how to address Black Lives Matter, as someone with a platform but someone who is white. It’s not my voice you need to hear right now.

There are lists galore are circulating these days of books to read about the relationship between racism and whiteness. Some include:

Hundreds more resources are a Google search away.

After reading even just one of these books, listening and hearing stories of Black people and people of colour, maybe we can start saying when it comes to racism yes Canada, yes Bowen, yes us.

Opinion: The importance of hobbies – seeking a passion for life after work
Jul 27, 2021 6:30 AM
Comments