If you’ve been fortunate enough to get through the tumult of 2020 without any devastating losses, you just might look back on the year and see your cancelled plans and life-shifts with gratitude and appreciation. The year’s been like an extended version of Lent, with no chance to opt out, and people have been finding some interesting ways to fill the vacuum of what’s missing. Getting re-acquainted with the ocean is one of them.

“Ocean swimming has really exploded this year,” says long-time ocean swimmer, Debbie Collingwood. “I suppose it’s because public pools have been closed aside from a short period this summer and that’s allowed people to discover the joy of swimming in open water.”

Debbie was supposed to swim the English Channel this summer. Given the circumstances, the North Shore resident set her sights on a challenge closer to home.

“Everything had to be adjusted and adapted, but what I realized is that you can still make things work,” she says. “Mother nature can throw a lot at you for a long distance swim in the ocean and I couldn’t have asked for a better day.”

On Aug. 31, she swam around Bowen Island in 11 hours and nine minutes.

“Also, I was having a hard time getting people in support boats and a number of Bowen Islanders who I didn’t even know offered to help. In the end, I didn’t need them but they still showed up to cheer me on. So that really restored my faith in people.”

People can be surprising sometimes. In 2020, they also surprised Debbie with how dedicated they were to getting in the ocean – even when the cold weather hit.

Bowen Islander John Stiver and his daughter Wylie are among those new ocean swimmers who refuse to be scared off by the cold. 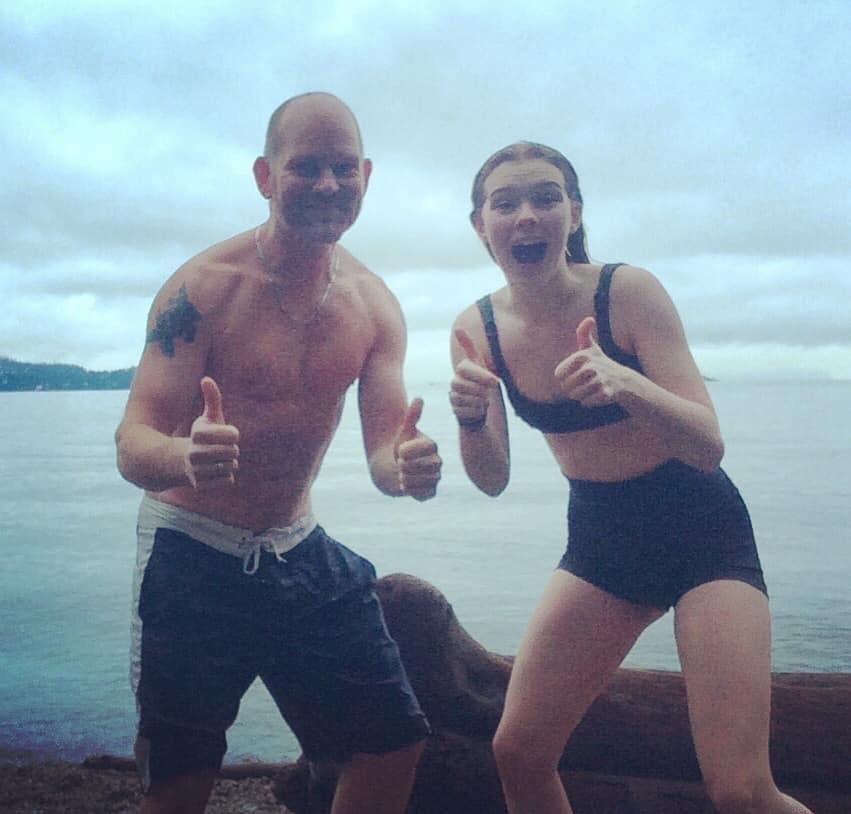 John Stiver and his daughter Wiley joyfully embraced the challenge of swimming in the ocean over the holidays. By Submitted

“At some point last March, Wylie set a goal for us to get in the water for 150 days straight,” says John. “Unfortunately, we had to break our streak due to a self-isolation period but on Christmas day she suggested we start again and keep going through to the end of the holidays.”

John says he’s always had a mild fear of the ocean but getting in the water is about facing that fear.

“Obviously, it’s hard to stay in for very long these days,” he says. “But when it’s warm out, I try to go a little further with each swim. Challenge yourself a little bit!”

“I never want to go in,” she says. “But I go on a regular basis with a few different women, and once you’re in the water you feel all giggly.

Mary says she sees a sort of “collective movement” forming with ocean swimming.

“I think people are looking for something to help them feel alive right now,” she says. “In my therapy practice, I’ve seen a real shift since the pandemic started.

“At the beginning, we were in a state of anxiety and hyper-arousal but the nervous system can only maintain that for so long.

“Over the past few months we’ve slipped into a state of lethargy, and many of us are feeling hopeless and alone. Getting in the cold water offers a nervous-system reset.”

Maybe that’s the pandemic’s gift: a global, collective reset. Maybe 2020 got us started, and instead of stepping back to where we were, we can step forward anew. Maybe we don’t have to go back to the office or change out of our pyjama pants. Maybe we can hold on to the appreciation of what’s right in front of us, even if that means submersing ourselves in seven-degree salt water and emerging onto a rain-soaked beach.

Wishing all health and happiness in 2021.

SwimBowen is the only open water swim-specific event in the Gulf Islands. The funds we raise offer support and assistance to people in the midst of cancer treatment.