"We’re definitely not the best nation in the world," school children learn about colonialism

“Getting to the truth was hard, but getting to reconciliation will be harder. It requires that the paternalistic and racist foundations of the residential school system be rejected as the basis for an ongoing relationship.
Dec 5, 2018 11:04 PM By: Bronwyn Beairsto 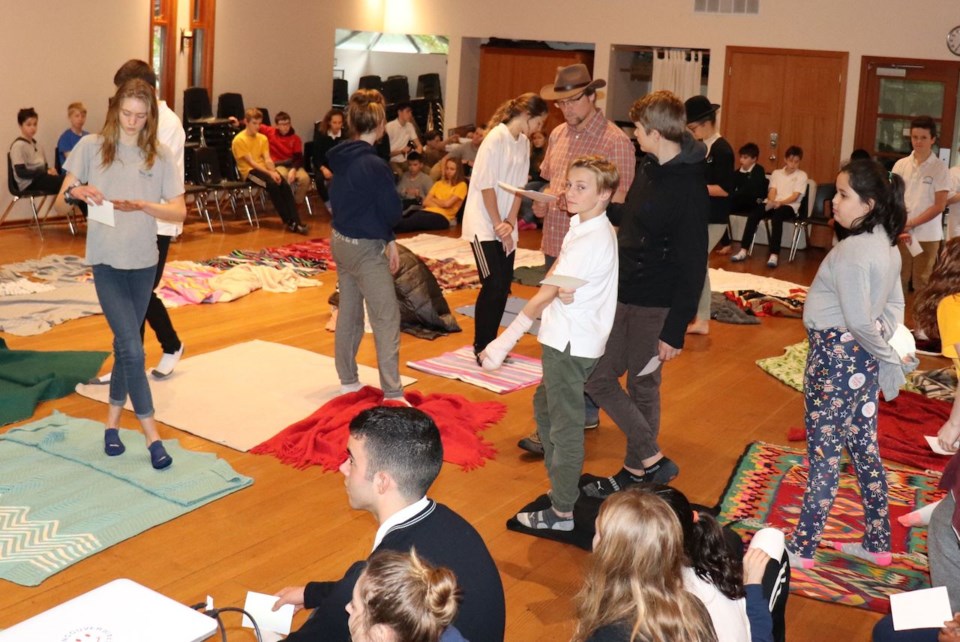 “Getting to the truth was hard, but getting to reconciliation will be harder. It requires that the paternalistic and racist foundations of the residential school system be rejected as the basis for an ongoing relationship.

“Reconciliation requires that a new vision, based on a commitment to mutual respect, be developed.

Explaining centuries of colonialism to an elementary school student isn’t a simple task. But some blankets and a script can help to explain Canada’s long-shrouded history.

Kairos Canada, with input from Indigenous Elders and educators, created the Blanket Exercise in 1996, in response to the Royal Commission on Aboriginal Peoples report. Facilitators read from a script and over an hour and a half, they guide participants through the 500 years of history in Canada - pre-contact, treaty-making, colonization and resistance. It has since been updated to include information from the comprehensive Truth and Reconciliation Commission report of 2015, which examined the history and impact of residential schools in Canada and marked a suggested path forward (94 calls to action.)

Island Pacific School’s grade six class explained to the Undercurrent how the Blanket Exercise works and their reactions, having just done it the day before.

“You put together all the blankets and it represents Turtle Island,” said Neve.

“Whatever blanket you’re on, it’s like your culture’s land and you represent different First Nations and that land is your land and you love it very much and then you’re pushed off of it,” said Nikki. “You get kicked off onto reserves.”

“And the people come and fold up your blanket to take away your land to show how the Europeans did it,” explained Max. Adding that everyone was given cards to represent their role in the exercise. “If you have a yellow card you go to residential school.”

“Canada denied the right to participate fully in Canadian political, economic, and social life to those Aboriginal people who refused to abandon their Aboriginal identity.

“And, Canada separated children from their parents, sending them to residential schools. This was done not to educate them, but primarily to break their link to their culture and identity.” - TRC

“If you got a yellow card with an x on it, it means you got to go back home, but then all the people who are still on the blanket of the residential school turn their backs on you to show how the ones who were allowed to return were isolated after being able to head home,” said Hannah.

“It was really sad to see. We started with 72 students and only three remained at the end,” said Lucy. “It was crazy. Some people died from hunger, smallpox, or they just got shot by the Europeans, or they didn’t survive residential schools, and it was really just sad to see.”

The federal government has estimated that at least 150,000 First Nation, Métis, and Inuit students passed through the [residential school] system. - TRC

“Canada is more evil than I thought,” said Josh.

“When [our teacher] was in school, they didn’t really talk about it,” said Jenny.

“It was so crazy to see that and to see what happened,” said Oliver. “And if you drive around, there actually are First Nations reserves, and at the edge of my neighbourhood there’s a reserve.”

“I knew Canada had done some bad things, I didn’t know it was that bad. That they pushed people into this small amount of space,” said Sam. “And the amount of people who died because of Europeans, we’re definitely not the best nation in the world.”

“I’d never even thought about what had happened,” said Caelen. “These people were here first, they were thriving on their land and the Europeans came and they started taking over. They broke their treaties.

“I find it amazing that after all that, First Nations still respected peace treaties, after all the ones that Europeans had broken.”

“It’s really hard to live with someone who took all of your land and killed your friends and family and made you suffer and took away all your traditions and forced you to live in a tiny chunk of land.

“If I was First Nations, I would not just let go.”

“We could give them more land,” said Sam.

“I don’t really think we can throw money and land at them and they’ll just go ‘oh, fine.’” Because what Europeans did was one of the biggest genocides in history,” said Lucas.

“The establishment and operation of residential schools were a central element of this policy [of assimilation], which can best be described as ‘cultural genocide.’” – TRC

“To make it right we’re going to need to take charge of things. Donate to charities, help in places, all that kind of stuff,” said Charlotte. “Some people are taking all their everyday rights for granted and they don’t realize what Indigenous people are going through.”

“This exercise is just scratching the surface of what First Nations have gone through and how much they are still going through because there are still survivors from the residential schools,” said Nikki, who also mentioned the need to work with Indigenous peoples.

“Being a little bit First Nations, it’s sad because some of my ancestors could’ve gone through residential schools or something like that,” commented Nikki.

“I think what we should do is, first, raise awareness about this,” said Neve. “We should talk to people about this.”

“We can fix this. There’s enough of us at this school. If enough of us become politicians and something close to that. We could potentially change our bit of the world,” said Kalan.

The Blanket Exercise ends with a talking circle, a debrief to see how people are feeling and what they’ve learned.

“It’s amazing how profound their reactions to it are, how in touch with the entire experience they were,” said their teacher, who has done the exercise four times before, with similar results. “Building awareness through a tangible, physical experience has a much greater and longer lasting impact than writing on a white board and just telling the history.”

These students did the grades four-to-eight version of the exercise. Other iterations exist for adults.

“To the Commission, reconciliation is about establishing and maintaining a mutually respectful relationship between Aboriginal and non-Aboriginal peoples in this country. In order for that to happen, there has to be awareness of the past, acknowledgement of the harm that has been indicted, atonement for the causes, and action to change behaviour. We are not there yet.” - TRC