From one apparent paradise to another 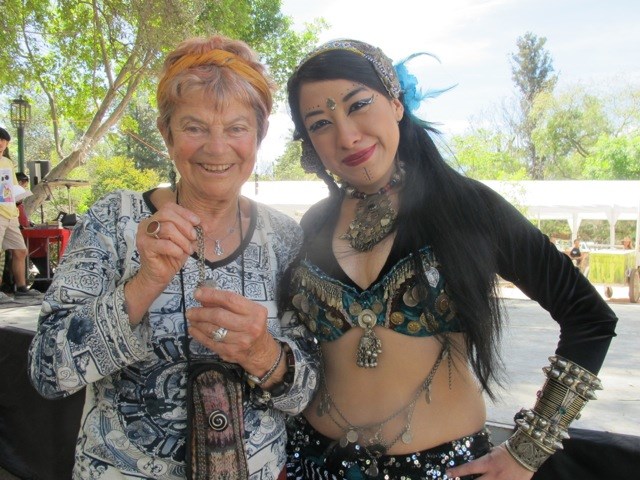 Kami Kanetsuka, left. “I had recognized and admired the belly dancer’s Afgan and Indian jewellery and she then presented me with a beautiful little heart hanging from a chain, probably from Afghanistan.”

I am once more in this incredible city that has recently experienced some rainy B.C.-like days. After several weeks of an overload of lectures, films, theatre, and festivals around town, it was rather comforting to find myself sitting at a sing-along concert by Bram Morrison, one of Canada’s iconic folk singers. Famously known for being part of the group ‘Sharon, Lois and Bram,’ he is a versatile singer who sings in English, Spanish and French. This was a benefit for Amistad Canada that supports some good educational causes in San Miguel, of which Bram is a member.

It seems to me that there are now more Canadian than American visitors during the winter months and having had nine Bowenians here at one time, made me fantasize somehow of twinning this city with Bowen Island and doing exchanges. A couple of years ago Condé Nast claimed San Miguel de Allende to be the best city in the world to live in.  Since then the masses have swarmed here and for many this paradise is now bursting at the seams and when walking in the center and one often sees more foreigners than Mexicans.

That changes over Easter weekend, as San Miguel is known for its Semana Santa, holy week, events and parades which brings in thousands from all over Mexico. Today, as I write, it is the Friday of Sorrows, a day of mourning but also of faith and tradition. This evening one can roam the streets to visit Mexican households where they have set up elaborate altars with personal statues of the Virgin Mary. They will also offer refreshments to the passers by.

Certainly this visit has had its share of somber moments.  I arrived shortly after the death of Toller Cranston and his many close friends and his devoted staff were deeply grieving. Many visitors to town had lingered in his exotic garden after spending time at his various gallery exhibits. To walk past his now shuttered house with the fading wreaths was a truly sad moment.
Indeed this little heritage city is a microcosm of the world where nothing goes unnoticed and everything passes through.

The Spring Equinox was celebrated in the Botanical Gardens, with a ritual and a concert with three very talented young percussion musicians. There was also the annual spring parade of kindergarten children dressed as flowers, insects and animals. Recently there was a Fringe Festival with several free events.  One of the highlights was ‘Murder, Margaret and Me’ a one woman show performed by London actress Janet Prince about Agatha Christie and Margaret Rutherford, which was a sold out hit at Edinburgh, London and New York and now San Miguel.

It is difficult to know the future of San Miguel, where there has been an international community living here since the 1930s. It used to be “the thing” to come for creative pursuits or to study and many settled.  As Toller Cranston said in an interview on living in San Miguel, “people come here to reinvent themselves and discover what it is that they want to do.” Now many people come for retirement.

With all the exiting events happening in the heart of this town, it does feel like we are all living in a bubble and it is easy to fantasize that it is paradise.  One only has to move a few kilometers out of the city to the villages to see another world where people live without some of the barest necessities of life. Thankfully many of the events in San Miguel are benefits that go towards alleviating some of these problems.  Programs of awareness abound and hopefully more of the changes will be for the better and for the local people.