Garlic. Chili. Meat. Beer. Individually, all of these things make me a happy guy. When they are combined in an artful manner, my happiness meter is pinned deep into the red.
Sep 10, 2014 5:18 PM By: Rob Bailey 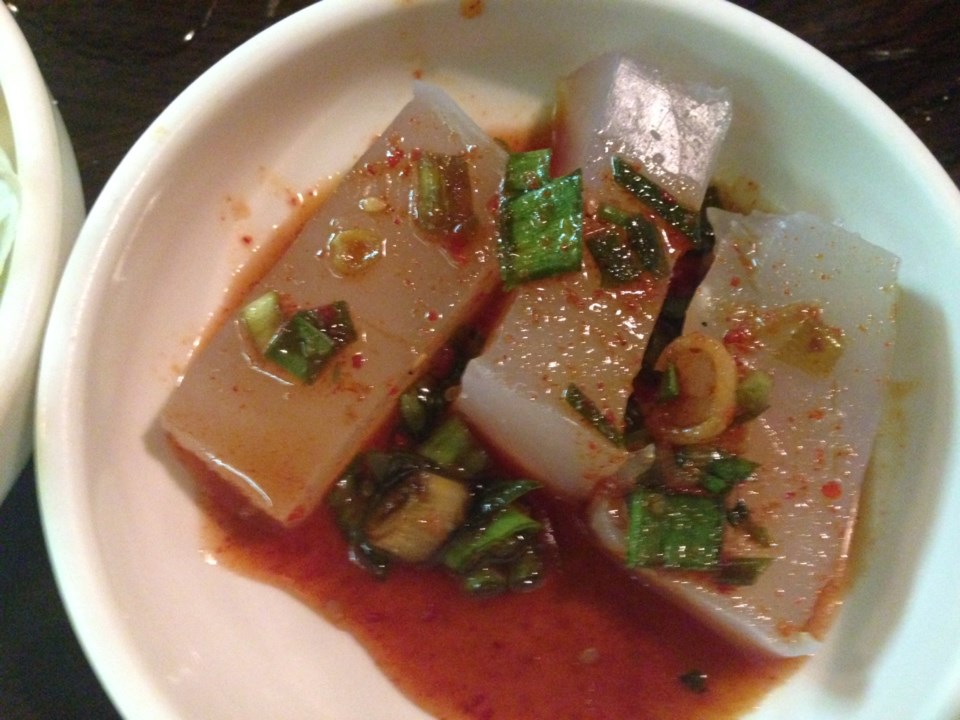 Garlic.  Chili. Meat. Beer. Individually, all of these things make me a happy guy. When they are combined in an artful manner, my happiness meter is pinned deep into the red. Rarely are these elements combined as satisfyingly as they are in Korean food. It’s a relatively unknown thing in Vancouver, especially when compared its somewhat more glamorous Chinese and Japanese cousins. The kicker is that it’s usually cheaper, healthier, and always heartier!
It’s not uncommon in many Korean restaurants to have a big circular gas burner in the middle of your table (like the do at “Shabu Sen”, the Japanese/Korean hybrid place on Burrard) so that you can grill a seemingly endless procession of marinated chicken, pork, beef, and seafood exactly how you like it, all the while sampling the plethora of vegetable side dishes (called ‘banchan’) and washing it all down with a nicely chilled Korean lager. Yes, your clothes will smell like a mixture of smoke, pork, and soy sauce, but in my world, that’s not exactly a bad thing.
A Korean winter can get pretty cold, and so you need to have food that’s going to keep you warm. Hearty beef and pork soups, laced with chili and onion. Lots of grilled meats marinated with soy, sesame oil, and garlic. Then there’s grilled fish and squid with a little hit of chili. And what goes better with all this hearty goodness than anything else on the planet?  Two words:  Kim Chee.
Kim Chee is like good art, in the sense that it polarizes opinion. Some people love it and seek it out in some form at every meal. Others run screaming, complaining that they could never ever eat anything that looks like a head of cabbage got into a bad car accident, and smells like old socks to boot. I’m here to tell you this: it’s wonderful stuff, and it comes in an infinite variety. It’s most commonly made with sui choi (a kind of cabbage), garlic, ginger, salt, and some special Korean chili flakes.  It’s then naturally fermented before being consumed, sort of like a kosher dill pickle. Kim Chee is an essential component in any Korean meal. The probiotics and high vitamin C content make it incredibly good for you, and it tastes really good. If you like that sort of thing…  It’s also made with daikon radish, cucumber, shiso, and even more exotic ingredients like cod guts. Yes, I said cod guts.
Over the summer, I discovered a little place on Denman Street in the West End called “Ma Dang Coul”.  I walked by it a few times before venturing in, and every time I did, I noticed that it was filled with very happy looking Korean people. It’s small, a little smoky (not cigarettes!), and sometimes a little noisy.   This is where people go for a very unpretentious night of good hearty food and a few beers. It’s not fancy, and to me, that’s part of its charm. Sometimes, I have to wait for a table for five minutes or so, but hey, there’s garlic, chili, meat and beer…
One of my favourite items to order in any Korean place is a fabulous soup/stew dish called “Yuk Kae Jang”.  It’s a beef and chili broth with fall-apart beef brisket shreds, egg, mushroom, green onion, and been thread noodles.
It comes to the table bubbling hot in an earthenware bowl, ready and able to kung fu kick winter into complete submission.     It comes with a bowl of rice, and several side dishes of banchan.  At this particular restaurant, the side dishes are usually the mighty and ubiquitous Kim Chee, a potato dish made with sweet soy, wilted mung bean sprouts with sesame oil, a small green salad with a dressing that is suspiciously like Kraft Italian (but we’ll let that go for now), and a very interesting marinated gelatinous thing, the origins of which I am uncertain. I am certain that it tastes good, though!
At all Korean restaurants, the side dishes are replaced with new ones upon request.  This makes your meal almost an “all you can eat” kind of adventure.   In this case, Yuk Kae Jang is always about a $10 dish.  It’s a heck of a deal when you consider the rice and side dishes, and it’s very filling and very, very good for you.  You may need a small automotive crane to extricate yourself from your seat when you are done.
The next time you’re in the West End, and you want to try something both a little different and screamingly authentic, check out Ma Dang Coul.  Winter is coming, and you gotta know how to keep warm!