When we were living in Kerala in 2009, we would see this item on the menu of several restaurants, and we found ourselves asking that very same question. We had never seen it before on any Indian menu on this side of the International Date Line.
Jun 26, 2014 11:16 PM By: Rob Bailey 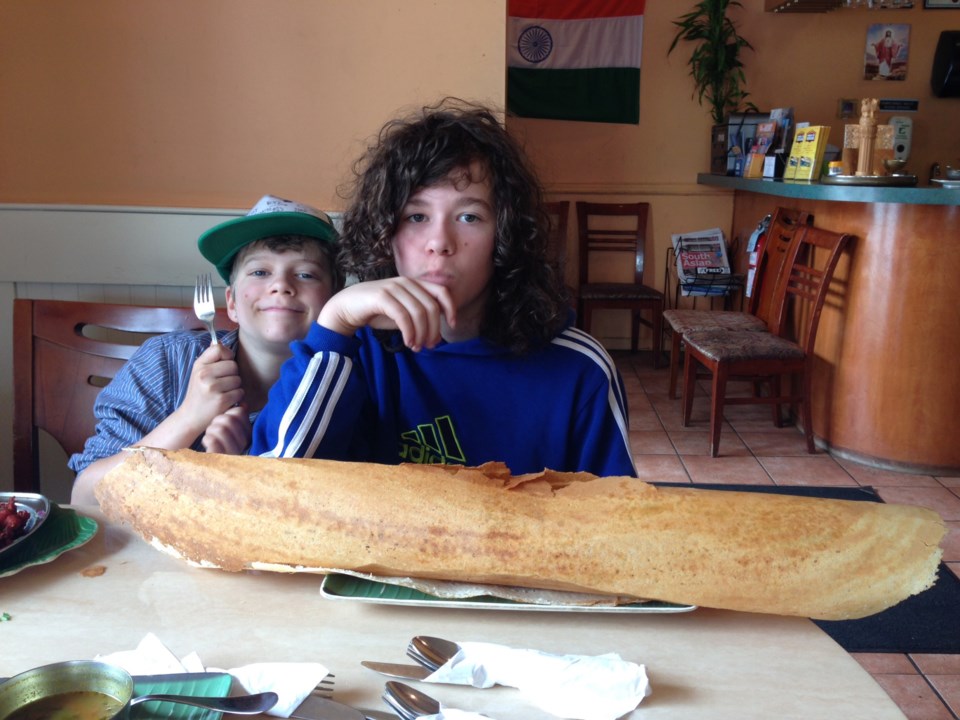 Isaac and Miles Bailey and a House of Dosa dosa. Miles ate the whole thing, by himself.

When we were living in Kerala in 2009, we would see this item on the menu of several restaurants, and we found ourselves asking that very same question.  We had never seen it before on any Indian menu on this side of the International Date Line.  Finally, our youngest, Isaac, screwed up the courage to order it one night.  It turned out that it was a couple of pieces of chicken that had been coated in a nice spicy masala (or spice mixture) and then deep-fried.  It was served on a typical tin plate with a fresh green chili and some sliced red raw onion.  It soon became young Isaac’s go-to snack when we found ourselves eating out at one of the many restaurants (or “hotels” as they are called there) that we frequented during our stay.
Many theories abound as to the origin of this quirkily named item.   Some say that it was a combination of 65 spices that went into the masala.  Mathematically impossible I say.  Some say that it was the year that the dish was invented.  Perhaps.  A more likely story of origin was that the original dish was simply menu item number 65 on the menu of the restaurant that first made the dish, and that customers simply pointed and said “I’ll have the chicken 65”.  In any case, this remains an ephemeral item only seen in certain South Indian eateries, and never, ever seen in a Vancouver Indian restaurant.  Until now…
Several years before moving to Bowen Island, Laurel and I used to live in the 22nd and Clark area of Vancouver.   It was then a somewhat seedy area of town, populated by the numerous nail parlors that functioned as fronts for Vietnamese gangsters, illegal after-hours clubs, heroin-dealing pool halls, and a plethora of pho restaurants.  The one shining light of the area was the House of Dosa, on the corner of Kingsway and Knight.   Here, in the midst of the hooker strolls and the occasional crack den, was an oasis of true authentic South Indian food.   The neighborhood has cleaned up somewhat (as always seems to happen when we move out of an area…) but the House of Dosa has remained in business, and in my opinion, has actually got better over time.   Before we lived in India, I did not fully appreciate its truly authentic nature.  That is until I went back to satisfy my craving for a dosa and I saw it leap off the page.  There it was. Chicken 65.  I was home.
But wait, there’s more…
A dosa (pronounced “doh-sah”) is a truly wonderful thing.  It is essentially a large crepe made from a slightly fermented lentil and rice batter (unless it’s a rava dosa, which is made from a grain like semolina), and then filled with a variety of things.  A batter is prepared and left to ferment overnight.  A foot and a half diameter circle of the batter is spread out thinly on a hot iron flat top griddle (the “paper” dosa is about a 2.5 foot circle!) and then expertly flipped.   A filling is then added, and the whole thing is rolled up much like an open-ended burrito.  You can get pure vegetarian fillings such as potato masala or non-veg fillings like spicy chicken Vindaloo,  chicken palak (spinach), shrimp, and so on.
Traditionally, a dosa is served with a coconut and green chili chutney, a tomato based chutney, and a small bowl of sambar, which is a nice, spicy vegetable stew with eggplant, carrot, tomato, and a very unusual Indian vegetable called “drumstick”.  Some people pour the sambar over the top of the dosa and mix it all together, while others prefer to have the dosa remain crisp and sip the sambar on the side.  The dosa is a South Indian staple, and it’s always eaten with just the hands.  To eat one in South India with cutlery is unheard of!  It’s eaten for breakfast, lunch, and dinner.  There’s never a bad time for a dosa.  It must be true, as this place is open 24 hours a day.
This place is the closest thing I have found in Vancouver to an actual South Indian restaurant.  The only thing that could make it more authentic would be if they had a common sink in the dining area for washing your hands before you eat with them.  It would be even more authentic if that sink had a large column of ants marching out of the hole where the faucet exits the wall.  I’ve exchanged knowing winks here with a couple of other Bowen Islanders who have been to India, and appreciate the authenticity and value at the House of Dosa.
My favourite is the chicken Vindaloo dosa, which I always order with a side of rassam, or “pepper water”.   It’s a thin and spicy vegetable broth that acts as an aid to digestion.  Not traditional with dosa, but I love it.  Sometimes we begin with an appetizer of “vada”, which is sort of like a deep fried lentil savory doughnut that comes with sambar for dipping and sipping.  Laurel goes pure veg, often ordering the rava dosa.  Miles usually gets the “paper dosa”, which he thinks is impressive because it’s over two feet long.  Size isn’t everything, I try to explain, but it falls on the deaf ears of a nearly teenage boy.   Isaac usually opts for the Chicken 65, which is no great surprise.  We all like our comfort food.
Did I mention that House of Dosa is cheap?  Not as cheap as India, but close.  This is especially true on a Monday, when they have any dosa on sale for 5.99, which is a serious steal.  In fact, they have a different special every day of the week.
House of Dosa is on the northwest corner of Kingsway and Knight, and it’s open 24 hours.  Dinner for two is well under thirty bucks.  The neighborhood is now very safe and family friendly.  Chicken 65 is available every day.