Bowen Island and its residents star in new indie feature film, 'Re: Uniting'

Not only is Re: Uniting set and filmed on Bowen but it stars several island actors

Bowen Island has acted as small-town California, small-town Maine (how could it not), small-town Washington, but rarely does the island play itself on the silver screen.

That’s about to change.

Cameras started rolling a couple of weeks ago on a new independent feature film set and filmed on-island. Re: Uniting is a drama about a group who were best friends in college but have grown apart, says writer, director and sometimes islander Laura Adkin. They come together for their 25th college reunion weekend – on Bowen Island. “Secrets of the past come bubbling to the surface, everyone’s hiding something,” says the filmmaker. With inspiration drawn from the classic ensemble dramas of the ‘80s and ‘90s – The Big Chill, The Breakfast Club, St. Elmo’s Fire, Steel Magnolias –  characters deal with some intense subject matter through witty, irreverent dialogue.

A movie built on Bowen

Adkin’s mother, Cathy, lives in Belterra and the filmmaker has spent a couple of years living on Bowen (but isn’t these days). “I love it,” she says. “I love the community feel.”

But Adkin and her mother are not even close to the only Bowen connections. Adkin wrote the lead of Re: Uniting for a friend of nearly 20 years – islander Michelle Harrison.

About a year ago, Adkin gave Harrison the script. “I read it and I loved it,” says Harrison. “That was the beginning of this whole journey that we’ve been on in the last year.”

Getting to film on Bowen is a dream for Harrison – she’s usually commuting to the mainland for roles like Nora Allen/Speed Force in CW’s The Flash – “I feel my happiest, my calmest, my most centered and my most self on Bowen,” she says.

Other non-Bowen actors involved in the production include Bronwen Smith, Roger Cross, Carmen Moore, and David Lewis, according to Deadline.

Then there’s also the community aspect. “Caro from Squirrel has been insanely helpful,” says Adkin. “The whole Belterra community is helping and doing different things.” Local band Ginger 66 (featuring both Harrisons) recorded a song for the film at Winston Hauschild’s Little Island Studio.

Then there are the Bowen locations: two local homes, the Little Red Church and the golf course.

COVID-19 is a major concern for the production and Adkin says they’re going above and beyond the protocols. “We’re doing a lot of stuff to make sure that everyone is being safe.” 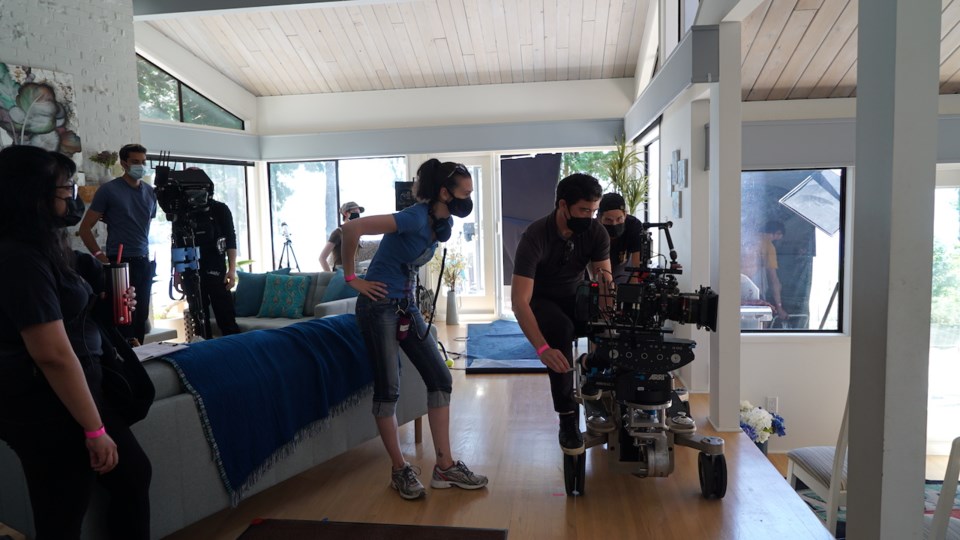 Re: Uniting started filming in the Bowen Bay area last weekend but other local locations include the Little Red Church and golf course. By Emma Neil / Re: Uniting

While there’s money coming into the community, this isn’t a big-budget production.

“It’s what we like to call an ultra-low budget,” says Adkin, “as in many things are being paid for on my credit card.”

As the producers and actors are all part of the Union of British Columbia Performers, they’ve created an ultra-low budget agreement meaning the film doesn’t have to pay the same rates as a big production. “Everyone knows what they’re signing on for. It’s a passion project,” says Adkin.

“It’s really great that we’re able to put a crew together,” she says –  a cast and crew who’re regularly working on big-budget American productions. “We’re all just going to summer camp, basically, and making this film together.”

Like sleepaway camp, most everyone also has to stay on Bowen, making use of the pandemic-induced emptiness of many island accommodations. Producers are also using several of Bowen’s eateries for local catering. “We’re able to spread the love and go to lots of different places and give people money,” enthuses Adkin. 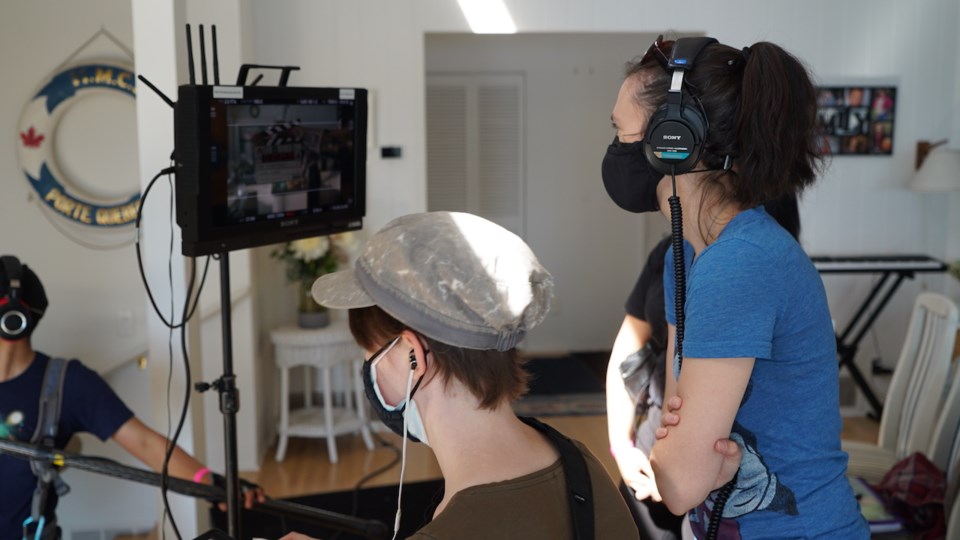 While Adkin wrote the film before the pandemic, the characters’ reckonings resonate with the past year. By Emma Neil / Re: Uniting

Harrison has acted as a Bowen liason for the film, particularly given the trepidation surrounding welcoming visitors during the pandemic. “Bowen is all about connections,” says Harrison noting how it would look on the Bowen Island Everything Else Facebook group with someone from off-island saying there’s a film shooting on-island. “You have to be connected to it and know that it’s good people that are coming, that they’re going to take care of the community, that they’re looking out for everybody and they’re going to represent Bowen in a really beautiful way.”

While Adkin and Harrison don’t want to spoil the film, Harrison sees echoes of Bowen experiences in Re: Uniting. “Some of the big topics in the film are things that our community has gone through, that we’ve all experienced with our friends,” says Harrison. “There’s something for me about making a movie about some of these topics, which I won’t name, that make it very personal.”

While Adkin wrote the film before the pandemic, the characters’ reckonings resonate with the past year. “One of the themes that I don’t mind talking about is the idea of aging and growing and next chapters and next steps and moving through things,” says Adkin. “I think a lot of people, whether you live on Bowen Island or not, in the last year have gone through a lot of what is my life? What am I doing? Do I like this? Is there a reason for this? Am I just existing and why?”

“There comes a point where you know that you have more yesterdays than you have tomorrows and that assessment of what you’re doing,” she says. “I like to call it the second coming of age.”

When all this is said and done, Adkin plans to have a Bowen screening of Re: Uniting.