Di paints the science, history and beauty of Howe Sound in 'Art for Sea to Sky' at the Hearth until Aug. 2

‘Art for Sea to Sky: Exploring the Science, Nature and Beauty of Atl’ka7tsem/Howe Sound’ runs July 8 to Aug. 2 at the Hearth Gallery on Bowen Island

From deep in the ocean, all the way up to Garibaldi Lake, the Hearth Gallery’s latest exhibit from Di, of Art by Di, dives into the natural history of our home fjord.

‘Art for Sea to Sky: Exploring the Science, Nature and Beauty of Atl’ka7tsem/Howe Sound’ is Di’s first solo show, though she’s been involved in several Hearth and off-island exhibits in the past decade and most recently, illustrated a kids book with local author Christie Lea.

“I basically wanted to do a show that celebrated the love and the beauty I see in Howe Sound,” says the Bowen artist. “And I’m hoping to dig a little deeper than that and talk about more of the science and the history.

"Everything that makes Howe Sound special, all wrapped up in paintings that highlight how beautiful it is here."

Included in the selection of 13 new works is a depiction of the sound’s celebrity species – glass sponge reefs. “They were only discovered back in the ’80s, off the coast of British Columbia. Before, they were thought to be completely extinct since the time of the dinosaurs,” enthuses Di.

Howe Sound has more than a dozen reefs. “They are these remarkable, otherworldly, deep sea reefs that are filter feeders and they filter massive amounts of water.

Quillback rockfish and shiner perch mill around reefs in ‘Fragment.’

“It was a challenge to work on because I’ve never actually been down there to see them,” said Di. But she met with Adam Taylor – who has been long involved in the effort to protect Howe Sound’s glass sponge reefs and ocean life – and examined videos and photos of the sessile sea creatures and their silica skeletons. 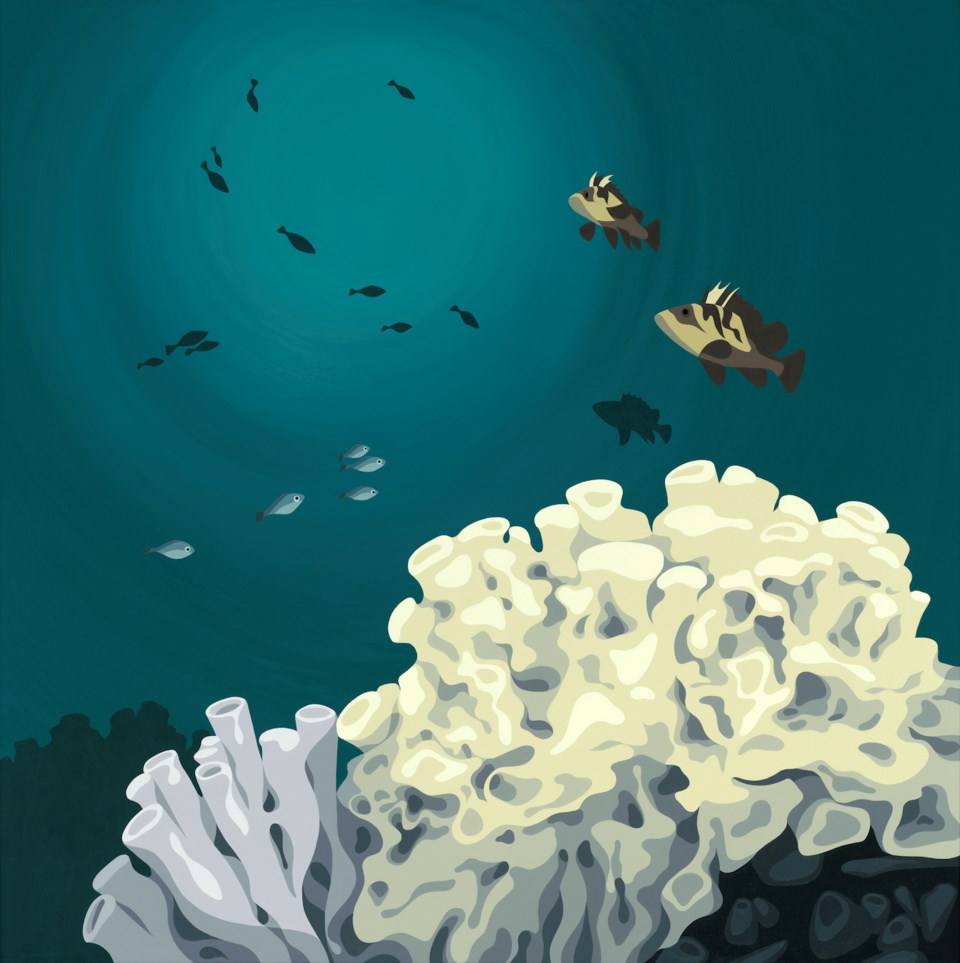 Then there's the story of the rehabilitation of Britannia Mine – told in part through a painting of the dock posts eroding down into the ocean. “It’s almost a success story, because salmon are now returning to Britannia Creek to spawn, which they hadn’t done in a hundred years.”

While each painting will have a little write-up in the gallery, there’ll also be an online component folks can visit for more information. “Because I don’t expect everyone to stand in the gallery for two hours and read all my write-ups,” laughs Di.

She’s donating a portion of all of the sales to the Howe Sound/Atl’ka7tsem Marine Reference Guide and a printout of the organization’s newly launched comprehensive map of the sound will feature in the show.

There’s also a colouring book of the paintings for sale.