From seeing tardigrades in sea water to atom-splitting stars, 10-year-old Nic, his beagle Obi, and the monsters of Nic’s anxiety take an epic journey in Safe in Starry Arms.

The debut kids book from Bowen Island author Christie Lea and Bowen artist Di released in late 2020 turns to nature and the wonders of the universe to subdue the “nasty, horrid thoughts” of Nic’s childhood anxiety.

While Nic is based on Lea’s own son Nicholas, the poetic prose bears resemblance to the former first responder’s own real-life journey. 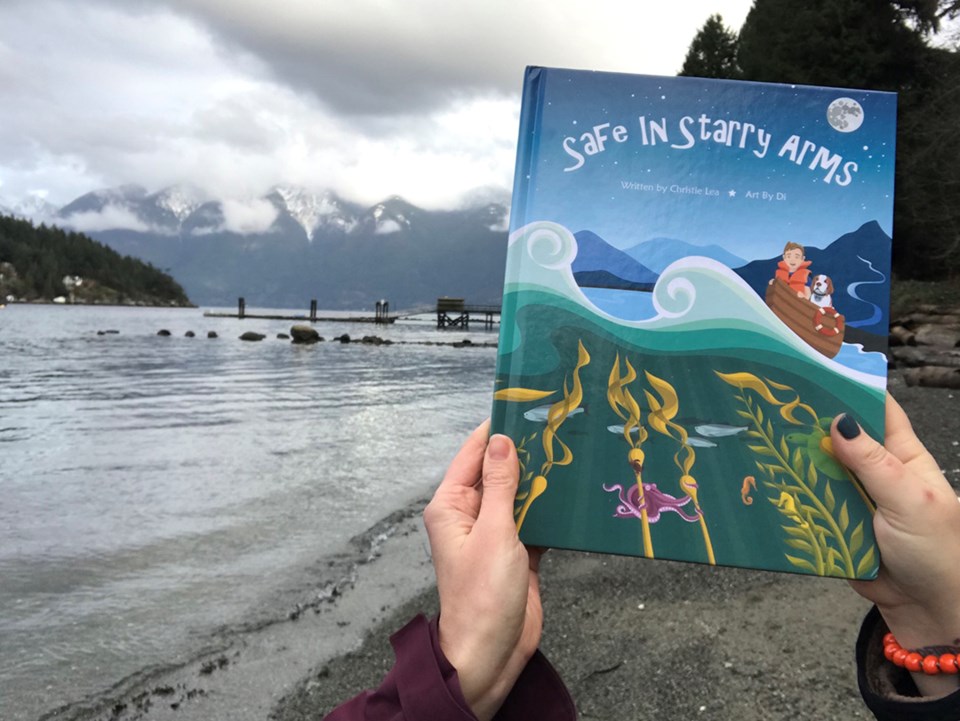 This is a “slow burn” type of PTSD, explains Lea, “It’s not one major traumatic event.”

The result of repeated or prolonged exposure to trauma, first responders are considered at higher risk of developing complex PTSD. A decade of three or four intense bursts of adrenaline every shift had taken its toll.

In 2018, Lea had a massive panic attack on her way back from a family trip. For about a week, she had attack after attack until she went to the hospital and sought treatment. “I had to just stop everything and focus 100 per cent on trying to get healthy,” she says.

The panic attacks didn’t go away immediately but through medication and other methods, symptoms abated after a couple of months.

But it was during one of these panic attacks Lea lay on her bed trying to find relief in sleep. “I had the sensation that I was going to fall through the bed and just keep falling,” she recalls, “into the abyss.

“That thing, whatever it is, is what we are and is what the entire known universe is made of,” she says.

“That was the moment where things shifted for me.”

That was when, as Lea describes it, she went crazy. She started researching everything she could about the known universe – physics, biology, chemistry, micro and macro physics, nuclear physics, laws of the universe (and how they don’t make sense at a subatomic level), noetic science, philosophy, reality paradigms, biocentrism.

“I felt obsessed with learning about the world and what made up the world,” she says. “I began to understand that I was a part of everything, that we are all part of the same thing…you can call it whatever you want — God, universal creative force, whatever it is.”

“Towards the end of the book, that’s kind of what [Nic] realizes,” explains Lea. “We all are this spirit, if you want to call it that. Like a universal spirit.”

“Before I had the epiphany and before I did all my soul searching, I felt very disconnected to everything,” says Lea. “Like a little finite creature,  unknown why I’m here, unknown where I’m going.” 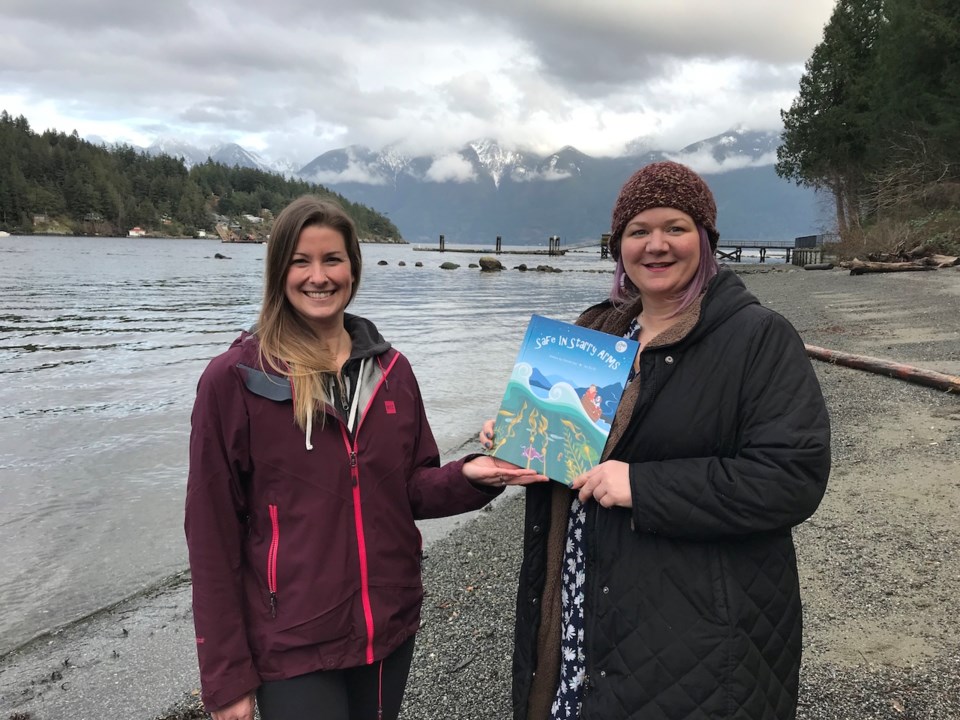 Di of Art by Di and Christie Lea in Deep Bay hold up their new kids book Safe in Starry Arms. By S. Middleton

As a part of her healing, Lea returned to an old passion, writing. She had no intention of writing a book but the manuscript took shape and she started wondering if it was publishable.

Lea found an independent publisher — Tellwell Talent — but finding an illustrator to suit her vision was another matter.

Then came Bowen’s annual Community School Association Craft Fair, where Di of Art by Di had a table.

“Immediately, I just absolutely loved her artwork,” says Lea. A few days later she approached Di about the book. Di immediately connected with the manuscript.

“Growing up, I’ve always had anxiety,” says Di. “So I always use nature and exploration of nature and science…that was always kind of my relief and happy place.”

“I really not only connected with what Christie was saying about how you can know yourself through knowing the universe and finding your place…but also the visuals [were] instantly, in my mind. I just pictured everything happening,” says Di.

She could see every page and every scene — rocket ships and propeller planes, sea stars and monsters — and having just come off of doing a children’s hospital mural, doing a book for kids and helping them through their anxieties or traumas appealed to Di.

Together, Lea and Di built a book that sees a young boy initially struggling with anxiety but who finds relief, comfort and joy through learning about the universe. They also want readers to learn about the universe with Nic. Lea doesn’t shy from concepts or words that even adults may need to Google. Like photons or loam.

“Because when you learn more, you just can’t believe it. The organization that went into supporting life on this planet is unbelievable.”

Di maintains the distinctive waves, bright colours and West Coast setting of her well-known art, while adding characters that’ll appeal to the younger crowd (like increasingly adorable anxiety monsters and rocket ships) and characters for the older crowd to identify (the aforementioned tardigrades and solar sails).

Lea wrote the manuscript before moving to Bowen in 2019, and yet, Bowen clearly features in the book.  “For me, [they were] images and stuff like that were universal,” says Lea. She credits Di’s influence for the Bowenness.

“I'm so inspired by Bowen and I started painting when I moved here so everything that comes out in my art is very Bowen,” says Di. “I think our connection to Bowen really just came out.”

(Lea too expresses her love for the island, describing it as her “safe place.”)

Lea is donating books to classrooms at Bowen Island Community School, a few schools on the North Shore and organizations that could benefit from such a book.

With this book done, Lea is working on her next two children’s books and Di is preparing for her Hearth exhibit in July, this one all about Howe Sound.

Safe in Starry Arms is available at Phoenix, the Hearth, Squirrel and major online book retailers.

Opinion: Skip the pleasantries and be honest about pandemic's impact on mental health
Jan 11, 2021 9:25 AM