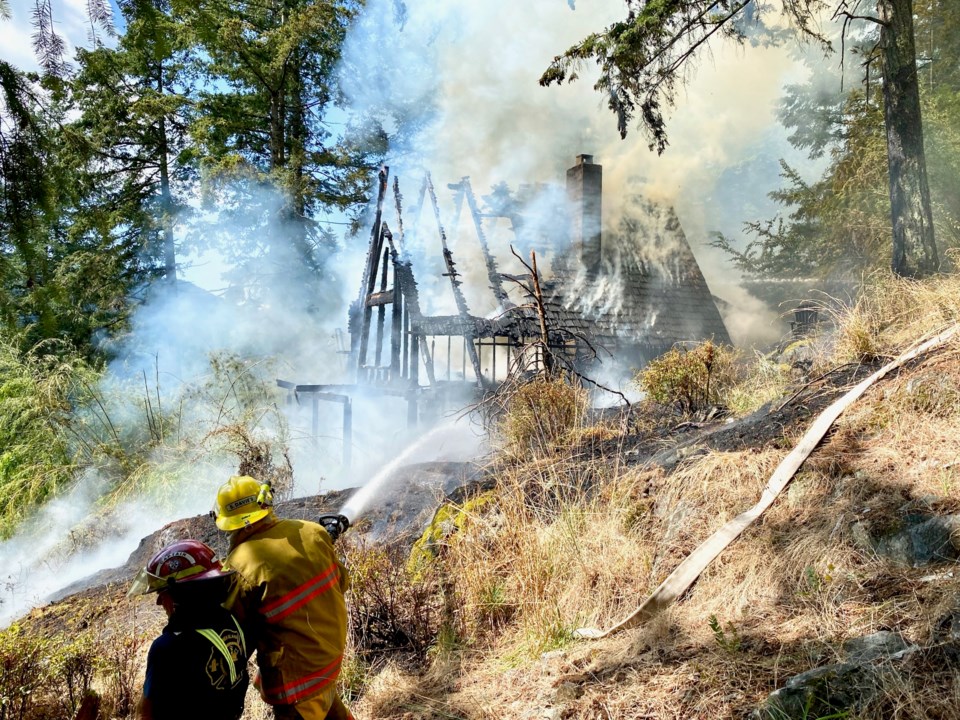 A house fire on Seven Hills in August saw a home burn to the ground. While the pictured fire was started from a BBQ, BIFR saved two other homes last year that had fires that started in the chimneys.Aaron Hanen

One fire, which took place on Remembrance Day, was contained to the roof and the upper floor of the home, said Hanen. The other took place in the final days of 2020 and was just in the chimney and attic space. “It was a very, very good save by the crew,”  said Hanen.

In 2020 Bowen Island Fire Rescue was able to quell two other chimney fires before they became house fires.

The other house fire last year — in August in the Seven Hills area — started from a BBQ. It was the only home that burned nearly to the ground last year.

The increase in chimney-related fires (BIFR had only one call out for a chimney fire in 2019) could have something to do with the pandemic, said Hanen.

“We always try to be prepared, but it’s funny when you get that many calls like that,” said Hanen. “We don’t know what it might be, but certainly I think more people being home is going to be part of the reason.”

The theory is, with more people home these days due to the pandemic, folks are burning more wood than usual and have perhaps expended their supplies of dry wood and have gone on to burn wet or unseasoned wood, creating more creosote in the chimney.

To prevent the fires, chimney cleaning is key. “Definitely once a year, you should have somebody professionally cleaning and inspecting it,” said Hanen, adding that some chimneys could also require more frequent cleaning.